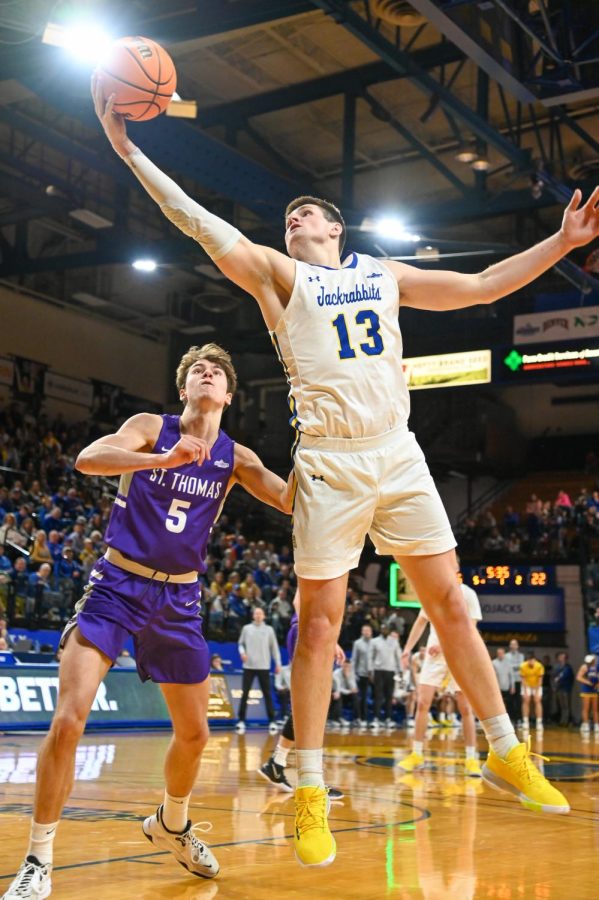 It took a double-digit comeback for the Jackrabbit men’s basketball team to beat Oral Roberts Thursday in Tulsa, Oklahoma, but the Jacks prevailed 106-102 in overtime against the Golden Eagles.

Thanks to a monster night from Luke Appel, The Jackrabbits (26-4, 17-0 Summit League) extended their record winning streak to 17 games in a row. They are tied with Gonzaga and Murray State for the longest active streak in the nation.

But the first half proved difficult for SDSU, especially on the defensive end, allowing 50 first-half points and trailing by as many as 13 points before taking a nine-point deficit at the half.

But in the second half, the Jackrabbits quickly stormed back, taking a one-point lead less than four minutes into the half. But Oral Roberts would respond, going back up by eight with 12:25 left. After another quick run from the Jacks, it was mostly a back-and-forth contest from there, and at the end of regulation, the two teams were tied at 88. For the first time in nearly two years, the Jackrabbits were headed to overtime.

Once the extra period began, SDSU appeared to have the game all but decided, jumping out to a seven-point lead with 2:28 left. But back-to-back threes from the Golden Eagles quickly cut the lead to one. But in the end, the Jackrabbits survived thanks to clutch shots by Douglas Wilson down the stretch.

And they won despite being without Appel, who fouled out in the final seconds. He finished with 41 points on 16-20 shooting and 10 rebounds and was the first Jackrabbit since Mike Daum to score 40-plus points in a game.

The only other Jackrabbits who finished in double figures were Wilson, who scored 29 points on 13-18 shooting, and Baylor Scheierman, who had 26 points and seven assists.

Up next for the Jackrabbits is their regular-season finale in Kansas City Saturday at 7 p.m. against the Kangaroos.