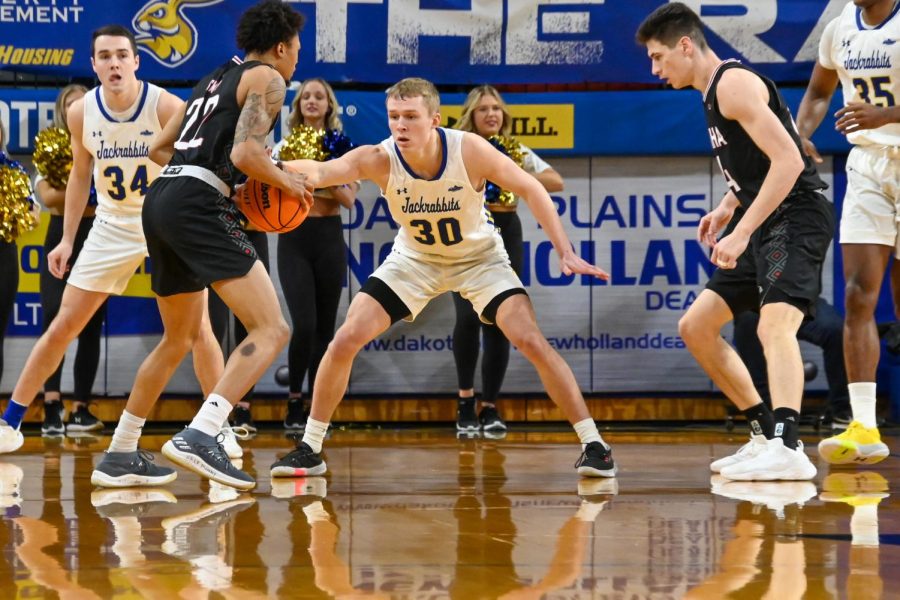 SDSU's Charlie Easley on defense in the Jackrabbits' game against Omaha last Saturday. On Thursday, Easley had a career night as the Jacks won 91-66 to clinch the Summit League title.

The Jackrabbits remain undefeated in conference play and their winning streak extended to 15 in a row, which is tied for the longest active streak in Division I. SDSU has also won at least a share of the conference title for five consecutive years.

“I don’t think about it very often. When you’re going through it, you just try to embrace every moment you get to step on the floor,” coach Eric Henderson said about winning the conference title. “But when you sit down and reflect, you know, I’m just very thankful and our team is very thankful.”

The Jacks improve to 24-4 overall and their 15-0 conference record is the best start in Summit League history. They are also one of only three schools in the nation with an undefeated conference record (Gonzaga and Murray State).

Aside from a couple of early Leatherneck threes, the Jackrabbits were in control from start to finish.

Early in the first half, the Jacks went on a 19-0 run in just over five minutes that took a 9-9 tie into a 28-9 SDSU lead. Leading the run was Charlie Easley, who broke his career-high mark halfway through the game’s first 20 minutes. During that run, Easley scored 11 of the 19 points, including three 3-pointers.

After that run, the Jackrabbits never looked back as they took a 48-26 halftime lead before walking away with their 25-point victory.

“I thought we got off to a great start,” Henderson said. “Other than giving up a couple of easy threes early, I thought defensively we were maybe as good as we’ve been all year in the first half. And Charlie kind of took care of everything else on the offensive end.”

Easley finished with 19 points, 17 of which came in that first half, on 7-9 shooting and 5-7 from behind the arc. Baylor Scheierman again flirted with a triple-double, finishing with 19 points, eight rebounds, and eight assists. Douglas Wilson scored a game-high 21 points on 8-11 from the field.

Trenton Massner, the Leathernecks’ leading scorer this season, finished with 14 points but was held to only four in the first half. KJ Lee finished with a team-high 15 points and Cameron Burrell chipped in 10 points in 16 minutes off the bench.

The Leathernecks shot the ball 43.9 percent from the field and hit just 9-of-29 three-pointers. They fall to 15-12 overall and 6-9 in the conference this season.

“Just got off to a great start, so proud of our guys for that,” Henderson said. “Even in the second half, I thought we were sharp. We got a bunch of guys in for good minutes and everybody was able to contribute.”

Up next for the Jackrabbits is their regular-season home finale as they host St. Thomas Saturday at 2 p.m.