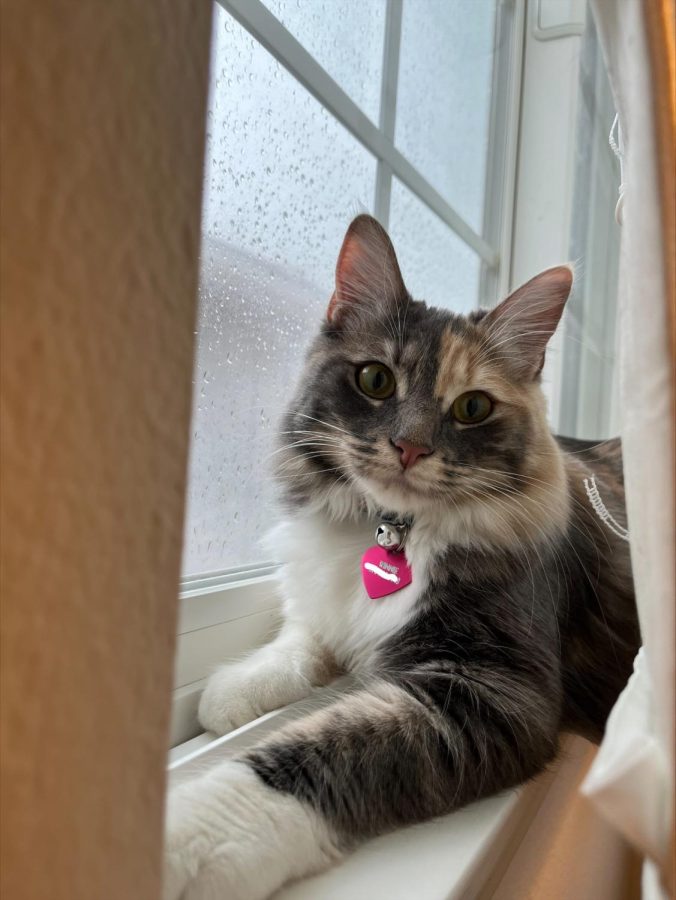 Margaret Franke’s sophomore year at South Dakota State University is turning out better than her first year, and she credits the improvement, at least in part, to Winnie, her emotional support animal.

Franke, an advertising major from Porter Ranch, California, adopted a cat last summer at home and brought it to Brookings this past fall to live with her in her room in Hyde Hall. To do that, she had to register Winnie as an emotional support animal, also known as an ESA.

“The process was fairly easy,” Franke said. “I needed a note from my therapist and got Winnie licensed in Brookings as an ESA. She also had to be caught up on vaccinations. Then I sent everything to (Housing and Residential Life) to be approved.”

Having Winnie with her makes the dorm feel more like home for Franke. She has “someone” to go back to at the end of the day. Like most freshmen, Franke felt homesick and anxious at times last year. Now, Winnie gives her something to take care of. The cat sits at her desk while she does homework, and Franke says her grades have improved compared to last year.

“Winnie always wants to cuddle or is meowing at me or doing something funny,” Franke said. “Even if I had a bad day, coming back to Winnie usually makes it better.”

ESAs are allowed to be only in students’ rooms and should not be going anywhere else on campus except outside for the restroom and exercise, according to university policy. They require no training to be registered as an ESA, and anyone with a therapist’s recommendation can get one. An ESA can be a dog, cat, rabbit, hedgehog, guinea pig or bird.

Each year, there are between 35 to 40 ESAs living in the residence halls across campus, according to Chris Kaberline, associate director of Housing and Residential Life and overseer of ESA process. Officials don’t turn away any of the applicants unless it puts an animal’s well-being at risk.

“I want people to have the opportunity to enjoy their time at college,” Kaberline said. “I don’t like to say no, but I do care for the animals and will do what’s best for them.”

She says most of the issues are taken care of by community assistants (CAs) or residence hall directors before they make it to her. She hears about only two to three issues a year, and they are usually resolved easily.

Kaberline supports students having ESAs and has seen it directly benefit many of them.

“I do think they are necessary,” Kaberline said. “I know having that animal around and next to you or available really does help calm them down so they can focus and they can live a better life.”

Aerin Hopkins, Franke’s roommate, said she was excited to have a cat in the room and loves having Winnie around. Her only concerns are the occasional smell and when the cat has too much energy.

“Winnie can be annoying, especially at night, but she also is really funny and makes it feel more like I’m at home here,” Hopkins said.

Madeline Osborn, a second-floor Hyde Hall community assistant, says the ESA program can be abused. She said some people bring their pet without genuinely needing them for mental health reasons. As a CA, she has rarely received complaints from her residents about ESAs on the floor, but she said she is a stickler for the animals to be in only their rooms or on a leash if outside of their room.

“I think genuinely calm ESAs can be helpful, but animals pose a lot of potential hazards and accidents waiting to happen,” Osborn said. “I don’t have an issue with them as long as they are actually for emotional support.”

A majority of students who apply to bring an ESA have good intentions to take good care of their ESA and follow university protocol, Kaberline said.

“An ESA provides companionship and support,” Kaberline said. “They’ve made a big difference in the enjoyment of dorm life for many of our students here.”