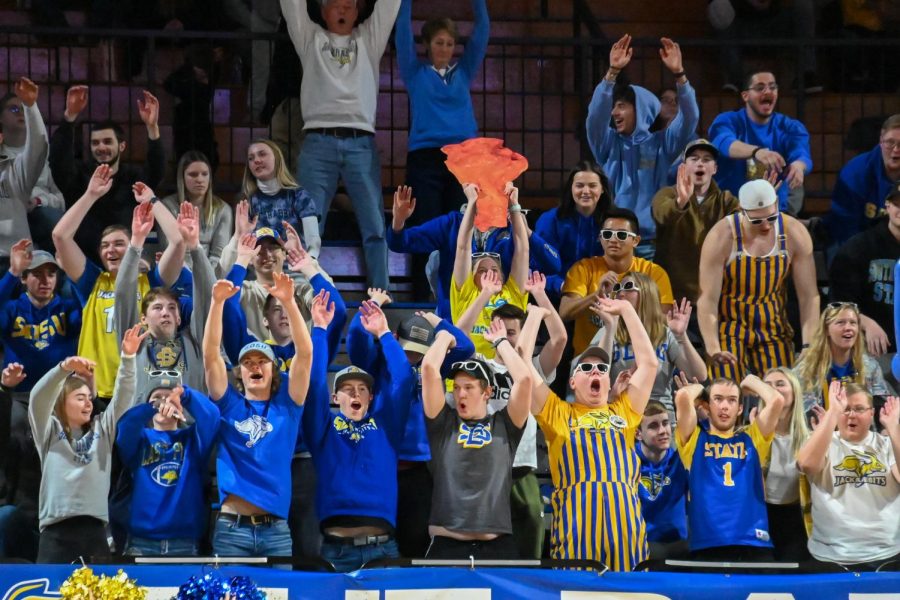 The multi-million-dollar renovation to Frost Arena will include what South Dakota State athletic officials describe as a one-of-a-kind, student-only club room that will serve as the centerpiece to the students’ game-day experience.

“I don’t think (this) has been done anywhere,” Athletic Director Justin Sell said, focusing on how the arena’s overhaul will affect students.

The students-only club room will be situated near where students will enter on the building’s southwest side. The space was described by Sell and Jeff Holm – senior athletic director of facilities and operation – as a gathering area where students can meet friends before finding their seats.

The student club room will directly overlook the action on the court, Holm said. It will offer standing-room views of the court, lounge space with TVs and some seating.

The renovation project, which will stretch over three years, is expected to begin in May. It will cost just over $50 million and is awaiting final approval in the legislature. The overhaul will transform Frost into what Sell has described as a world-class sports venue, and he and Holm said they haven’t forgotten about the students in the planning process, because the students are a key ingredient to Frost’s mystic.

“The student section that we are planning is going to allow our students to feel the comradery and feel like a team within the environment,” Holm said. He added that student attendance is critical to the overall gameday atmosphere. “It is everything. We have a possibility of an environment that is unlike anything at our level.”

After the renovation, the capacity for what will become known as First Bank and Trust Arena will be just over 5,000 seats. About 20% of that will be student seating, Sell said.

The upgrade will include all new displays, sound, lighting and more. The new venue also will feature premium seating, more restrooms, ADA seating options, expanded concessions and large corridors for easy access to any level.

Sell and Holm acknowledged that as the renovation project changes the physical nature of the arena, they want to keep the special environment Frost has managed to build during its half-century run.

It’s an environment that has allowed the Jackrabbit basketball teams to thrive. For example, since the 2011-2012 season, SDSU’s men’s team has compiled a 139-7 home court record inside Frost, earning the top spot across all the NCAA. In a 2018 article, Frost Arena ranked in the top-10 toughest home courts in college basketball. It was just one of three on the list that was not in a Power Five conference.

With such success, it is not lost on athletic officials to make sure that the new home of Jackrabbit basketball, volleyball and wrestling doesn’t lose its mystic.

“The top goal of the project is to not lose the feel of Frost,” Sell said. “Frost has a feel that as a Jackrabbit you entirely understand.”

Athletic officials are planning for a fall 2024 opening. Sell and Holm said they are toying with the idea of how to properly open the new venue. Among their choices are a “soft” opening such as an open house, or a Jacks Bash-style event.

No decision on that has been made yet, Sell said.

Jordan Kerns, President of the Jackrabbits student section known as the Rabbit Den, said he always feels “electrified” to go to Jackrabbit games. He added that he is excited for what is to come.

“It means a new experience,” Kerns said of the renovation.

He also is proud to note that the money to pay for the renovation is coming from private funding sources and not student fee increases.

“That is amazing,” Kerns said. “It shows that there are so many people out there that care enough and want to support what SDSU is looking to become.”