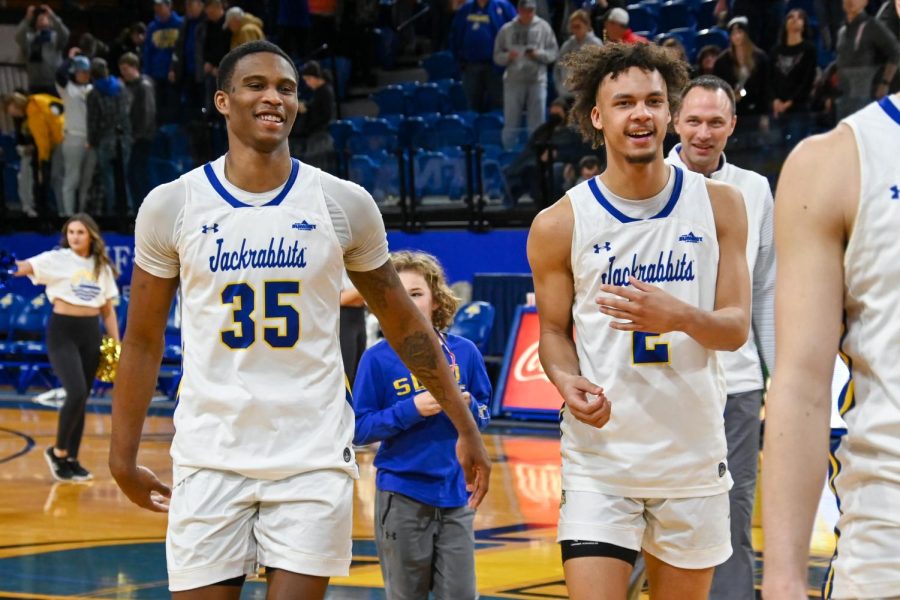 Senior Douglas Wilson and freshman Zeke Mayo celebrate after their win over Omaha Saturday afternoon. Mayo had a career high 21 points, shooting 5-8 from three-point range. Wilson had 19 points in the victory. Wilson will play his final two games at Frost Arena this week.

Coming off another strong two-game slate against Denver and Omaha last week, the Jacks extended their winning streak to 14 games in a row. They now prepare for their final two home games of the season as they continue to close in on the regular-season conference title.

“Good week for us last week and we’re excited about how we played,” coach Eric Henderson said. “The second half at Denver and the first half against Omaha for certain were pretty good, so we want to continue to build on those.”

On Monday, the Jackrabbits received three votes in the AP Top 25 poll, the second time in school history the team has ever received votes in the poll.

In their latest game against Omaha, the Jackrabbits shot 52.7% from the field and hit 10-of-24 3-pointers. They were led in scoring by freshman Zeke Mayo, who matched his career-high of 21 points. Other Jackrabbits scoring in double figures were Douglas Wilson with 19 points and Luke Appel with 12.

The Jacks maintain a three-game lead over Oral Roberts for first place in the Summit League standings with four games to go. They can clinch the regular season title if they win both upcoming games.

The Leathernecks (15-11, 6-8) currently sit in sixth place in the conference standings, making them a qualifier for the Summit League Tournament. Their latest game was a two-point victory against North Dakota. Other key wins for them earlier this season were in Fargo against North Dakota State and in Tulsa against second-place Oral Roberts.

WIU is currently having its best season since the 2012-13 season and will attempt to beat SDSU for the first time since the 2019 Summit League Tournament quarterfinals.

Trenton Massner is WIU’s leading scorer, averaging 16.4 points per game, followed by Will Carius with 15.3 points. The last time these two teams met was Jan. 22 in Macomb, and the Jackrabbits walked away with a 93-75 win. In that game, Massner had 25 points, three assists and five steals.

“He’s a terrific three-point shooter and he’s really good coming off of ball screens,” Henderson said of Massner. “He has the ball in his hands a lot, and he’s a dynamic player. We’ve got to do a good job of making sure he’s inside the arc.”

The Jackrabbits’ next matchup is again at home Saturday at 2 p.m. against St. Thomas on Senior Day.

Last week, they suffered two more losses that extended their losing streak to 10 games. The Tommies are sitting in second-to-last place in the Summit League, one game behind Omaha with five games left to play.

Their leading scorer this season is Riley Miller, who’s averaging 15.2 points per game. Miller also leads the team in 3-pointers made with 84. Their leading rebounder is Parker Bjorklund with 6.4 per game.

This season the Tommies are scoring 74.5 points per game offensively while giving up nearly as much, allowing 74.4 points.

“We’ve got a big week ahead,” Henderson said. “Western Illinois went to Fargo and beat NDSU and went down to Tulsa and beat Oral Roberts. And St. Thomas gave us a run at their place. So we understand our hands will be full and we’re excited for the challenge.”

Both games can be listened to on the Jackrabbits Sports Network and can be viewed on Midco Sports and ESPN+.