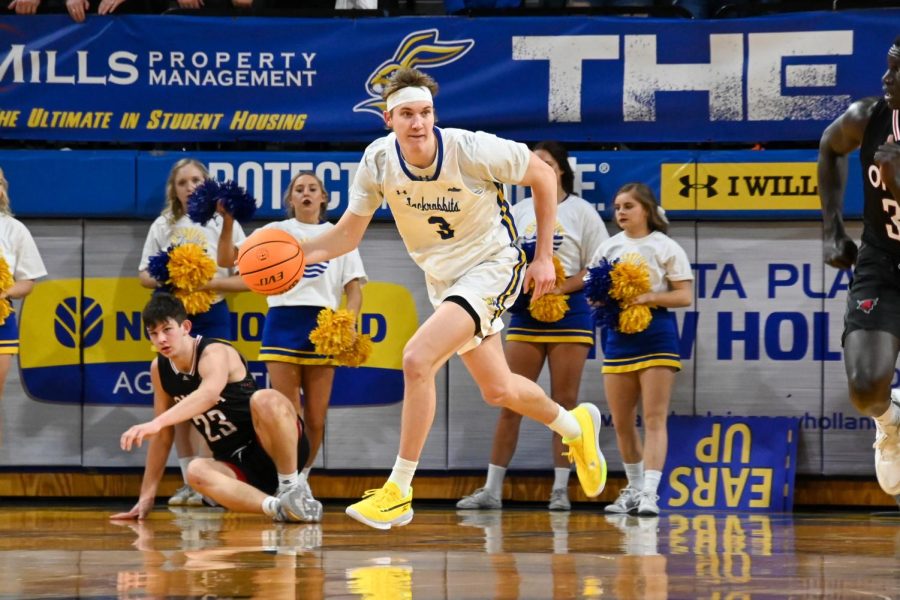 The SDSU men’s basketball team was in action at Frost Arena Saturday night against Omaha to cap the doubleheader of the 2022 Pork classic, as the Jackrabbits defeated the Mavericks 82-61.

This extends SDSU’s winning streak to 14 in a row, with an overall record of 23-4, and remain an undefeated 14-0 in the Summit League this season.

In front of 3,380 fans in attendance, the Jacks shot 53 percent from the field and hit 10 three-pointers, shooting 42 percent from deep. And they once again controlled the paint by outscoring Omaha 40-26.

After Omaha jumped out to an early 8-4 lead early, SDSU quickly rallied and came back on a 14-2 run. After that, SDSU controlled the rest of the first half and would go on to take a 44-19 lead going into halftime.

“Frankie Fidler hit two early threes within the first five minutes and that was six of their 19 points for the half,” coach Eric Henderson said. “I thought that the last 15 minutes of the first half, especially on the defensive end was maybe our best.”

Coming out of the locker room, SDSU picked up right where they left off. A Douglas Wilson dunk would ignite the crowd once again to start the second half and with 12:54 to go, SDSU stretched the lead to 29, their biggest of the night.

They went on to dominate most of the second half by playing consistent offense by driving the ball and kicking out to three-point shooters, cruising to the 21-point win over the Mavericks.

After a couple of rough games, freshman Zeke Mayo found his shot Saturday night, tying his career-high with 21 points on 8-11 from the field and 5-8 from three-point range.

“It felt great,” Mayo said. “I’m coming in playing with confidence and I’m continuing to get opportunities, so I’ve got to make the best of it.”

Wilson was once again consistent, scoring 19 points and grabbing seven rebounds. Baylor Scheierman added to the Jacks rebounding totals, posting a game-high eight rebounds. He also added nine points and six assists, and he didn’t miss a shot in the first half. Luke Appel added 12 points off the bench.

“He understands what it means to play here and is grateful for this program,” Henderson said of Wilson. “He is getting really excited for March.”

Nick Ferrarini led the Mavs in scoring with 14 points off the bench, while Darrius Hughes had 11, and Fidler added 10. Dylan Brougham recorded a game-high 10 rebounds.

SDSU will look to stay undefeated next Thursday night against Western Illinois back at Frost Arena at 7 p.m. And even as the Jacks close in on the regular-season conference title, their focus remains on the upcoming Summit League tournament.

“Like I’ve said all season long, we can go (18-0) and lose in the first round and we’re not going to get an automatic (NCAA Tournament) bid,” Scheierman said. “Just taking it one game at a time, that’s all you can do, and keep trying to get better and better.”