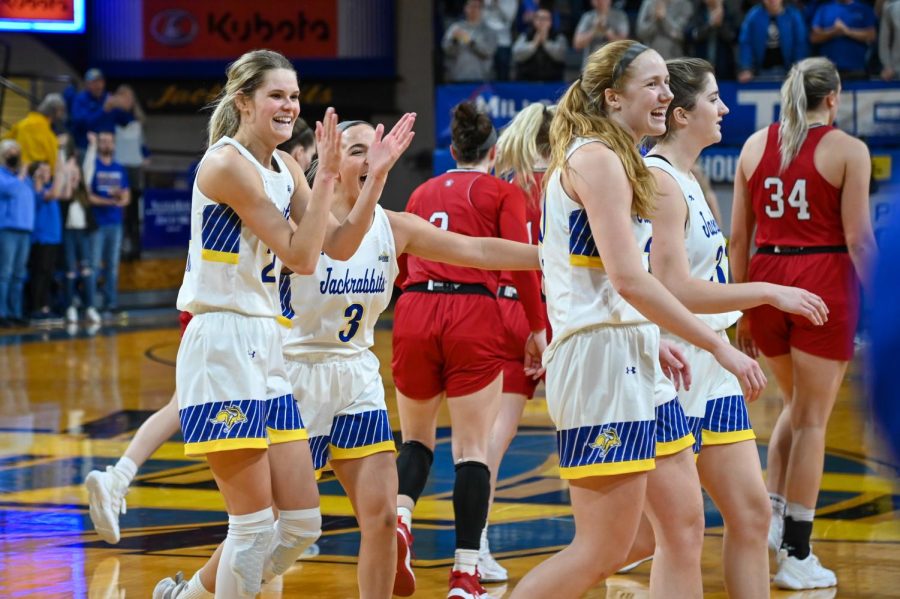 The South Dakota State women’s basketball team continued their dominance over the Summit League conference Saturday afternoon in its 77-62 win over Omaha at the Pork Classic.

Paiton Burckhard and Paige Meyer led the way for the Jacks (17-8, 13-1) as they each finished with 16 points apiece. Myah Selland had another strong all-around game, nearly finishing with a triple-double with 13 points, nine rebounds and eight assists on 5-of-11 shooting from the field.

Omaha (6-18, 2-13) played better than their record showed, keeping the game relatively close throughout the duration of the game as they cut their 20-point lead to ten at the end of the third quarter.

“They played well offensively, but I thought we played really well on offense too,” coach Aaron Johnston said. “I thought we missed some good looks and had a lot of easy shots, and some went in and some didn’t. Omaha did a nice job of hanging in there.

The Mavericks have given the Jacks trouble in the last few years as they upset them in the Summit League Tournament last season when Omaha was the No. 8 seed.

“I think they’re just a really hard-working team,” Burckhard said after the game. “It’s no surprise that they come out and they work their hardest, especially in an environment like this. They made us work for it.”

SDSU did not let Omaha back within ten points in the final frame as they finished the game with a 15-point victory in front of 3,128 fans at Frost Arena.

“I think we kind of let down defensively and maybe didn’t make the right reads a few times but runs happen in basketball games and I thought we responded well,” Selland said.

The Jackrabbits remain tied with South Dakota atop the conference standings at 13-1 each. The Coyotes picked up a win earlier today over Denver 81-53. SDSU has won nine straight games after their blowout loss to the Coyotes Jan. 8.

“Definitely feels good to have nine straight wins, but that doesn’t mean the next game isn’t going to be just as hard as the last nine that we’ve played,” Burckhard said.

SDSU is back on the road next week after its three-game homestand this week. They travel to Macomb, Ill. to face off against Western Illinois Thursday at 6 p.m. After that, the Jacks head to St. Paul, Minn. to play St. Thomas. Western Illinois is currently seventh in the Summit standings at 5-8 and 14-10 overall, while St. Thomas is currently eighth in the last spot to qualify for the tournament at 3-10 and 6-17 overall.