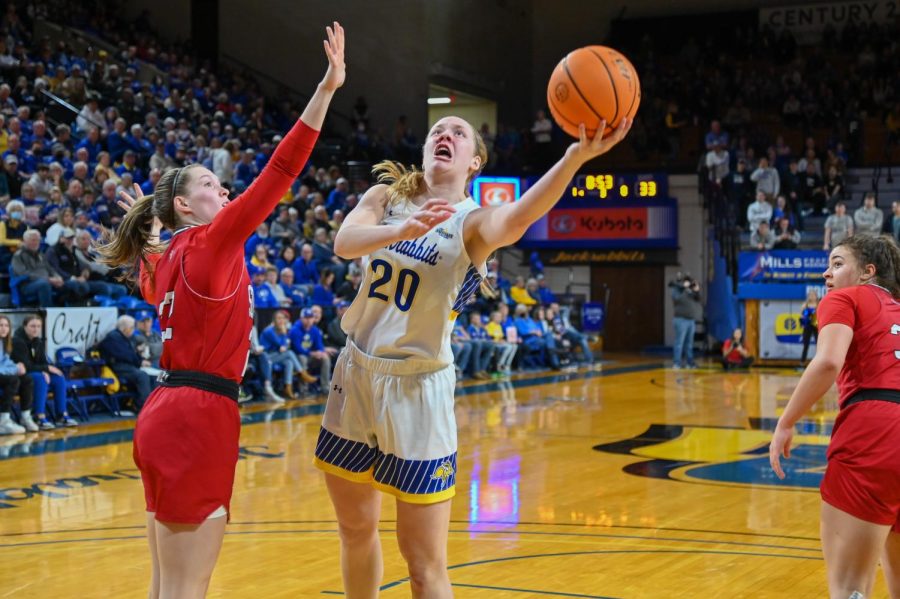 The South Dakota State women’s basketball team faces two teams at the bottom of the Summit League Standings this week, Denver Thursday and Omaha Saturday, both games at Frost Arena.

The Jackrabbits (15-8, 11-1) came off their biggest win of the season last Saturday, handing South Dakota their first conference loss and snapping their 16-game winning streak in a 75-65 win in front of 3,549 fans.

“This last weekend gave us a chance to be where we want to be, trying to compete for a regular-season title,” coach Aaron Johnston said. “This last game against South Dakota was really important for us to figure out a way to win and stay in contention for a championship.”

Here’s what to look for ahead of SDSU’s next two matchups this week.

The Jackrabbits’ first matchup of the weekend will be against Denver (8-16, 3-10) on Thursday.

SDSU is now tied with USD atop the Summit League standings with their win on Saturday. They are currently on a seven-game winning streak with their last loss coming to the Coyotes Jan. 8.

As a team, they have the third-highest scoring offense in the Summit League, averaging 72.5 points per game. They are also second in scoring defense in the conference, allowing 59.6 points a game.

Since returning from injury, Myah Selland is averaging 11.4 points and 4.1 rebounds per game in 16 games.

They are coming off an impressive 62-48 win in Denver against North Dakota State and have won three of their last five games.

As a team, the Pioneers scored 65.8 points per game, which is seventh in the Summit League. Defensively, they have struggled, currently sitting last in the conference allowing 72.7 points a game.

Denver’s leading scorer and rebounder is Uju Ezeudu, who averages 17.7 points and 8.6 rebounds per game. Their leader in assists is Indeya Sanders with 91 this season.

The last time these two teams met was Jan. 15 in Denver. The Jacks cruised past the Pioneers in an 87-43 win.

The Jackrabbits’ final matchup of the weekend will be on Saturday against last-place Omaha.

Their last meeting was Jan. 13 in Omaha. Prior to that game, the Jackrabbits were coming off a 23-point loss to the Coyotes in Vermillion.

For SDSU, it was a good rebound game for them, as they walked away with the 72-49 victory, as it jump-started their seven-game win streak.

In that game, the Jackrabbits hit 13 3-pointers and held the Mavericks to only six points in the third quarter. Burckhard finished with a team-high 16 points and added five rebounds. Tori Nelson had 13 points and six rebounds.

The game was a tough one for the Mavericks, who only shot 37.5% from the field and 3-14 from behind the arc.

Despite none of the starters scoring in double figures, Elena Pilakouta scored 16 points off the bench.

This season, the Mavericks (6-16, 2-11) have struggled. They are currently on an eight-game losing streak, their last loss being a 13-point defeat to North Dakota on Saturday.

They are last in the Summit League in scoring offense, averaging only 57.9 points per game. They’ve fared a little better on the defensive end, allowing 65.5 points per game, which is sixth in the conference. Despite that, they are still being outscored by 7.6 points.

Their leading scorer this season is Mariah Murdie, scoring 11.1 points a game. She is also the team’s leader in rebounds per game with 6.9. Pilakouta is second in scoring with 10.7 points and Alexis Pratt is their leader in assists with 53.