Jackrabbits turn the Mountaineers in Frost 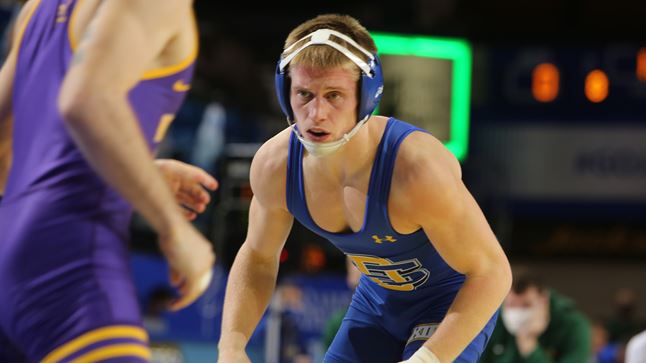 141-pounder Clay Carlson in a meet from earlier this season. In SDSU’s latest dual against West Virginia, Carlson, ranked seventh in his weight class, defeated WVU’s Caleb Rea by a 13-4 major decision.

The No. 23 South Dakota State Jackrabbits rallied past the West Virginia Mountaineers at Frost Arena last Friday. The Jacks would win the final five matchups and six out of 10 overall, and rally to win the dual 23-16.

The win is SDSU’s 30th under coach Damion Hahn, and it puts the Jacks at 10-2 overall and 3-0 in Big 12 duals this year. They are also undefeated in home duals this season. The Mountaineers are 5-4 overall and 0-2 in the conference.

“Man, the crowd showed up and that was fun,” Tanner Sloan said. “It was electric. I loved the booing of the ref and the bad calls.”

“The crowd tonight was great; this is probably the best crowd we have had all year,” Hahn said. “Our guys feed off that. There isn’t a better place in the country to wrestle in than in front of our fans here at Frost.”

The Mountaineers would get on the board first with a win at 125 and 133 pounds. The Jackrabbits would respond with wins at 141 by Clay Carlson and at 149 by Daniel Kimball. WVU would then respond with a win at 157 taking a 10-7 dual lead at the break.

“I thought the guys wrestled tough,” Hahn said. “I thought up and down the lineup was good, and I thought our pressure was good. I think tonight, our guys did their jobs.”

The 125-pound matchup would see WVU’s No. 6 Killian Cardinale takedown Tanner Jordan with an 11-2 major decision. The 133-pound match would see the first upset of the night, as WVU’s Garett Lautzenheiser defeated 32nd-ranked Gabriel Tagg in a 14-12 overtime decision.

SDSU’s No. 6 Clay Carlson went up against WVU’s Caleb Rea and got the 13-4 major decision at 141 pounds. 149 would be the second upset of the night when SDSU’s Kimball would get the 3-1 decision over Jeffery Boyd.

157 would see Alex Hornfeck get a 4-0 decision over SDSU’s Kenny O’Neil. 165 would go in the Mountaineers’ favor again with a pin from #9 Peyton Hall over #27 Tanner Cook.

After that, the Jacks would sweep the dual’s final four matchups. The run started with an 11-1 major decision by No. 8 Cade DeVos over Dennis Robin at 174 pounds. At 184 was another upset when SDSU’s Cade King would grind out a 6-4 decision over Anthony Carman. Hahn wasn’t originally planning to wrestle King because he was not fully healthy, but he needed King to step up to help win the dual.

SDSU’s No. 22 Sloan at 197 pounds pinned Jackson Moomau and gave the Jacks a 20-16 lead heading into the final match. It then marked Sloan’s 50th career victory in a dual. He is 50-14 overall in duals.

“I was not expecting it right then,” Sloan said about getting the pin. “I was just trying to go for some points to secure bonus points, and I kind of got it locked up and it was tight.”

At heavyweight, SDSU’s No. 22 A.J. Nevills would pull the final win of the night, getting the 9-6 Decision over No. 21 Michael Wolfgram.

“It doesn’t matter who I’m wrestling with,” Nevills said. “I am just going to try my best and leave it all out there. And it felt really special wrestling in Frost tonight with a packed arena.”

The Jackrabbits will now turn their focus to Oklahoma State as they travel south for two more Big 12 duals against the No. 3 Cowboys Friday, Feb. 4, and No. 21 Oklahoma Sunday, Feb. 6.