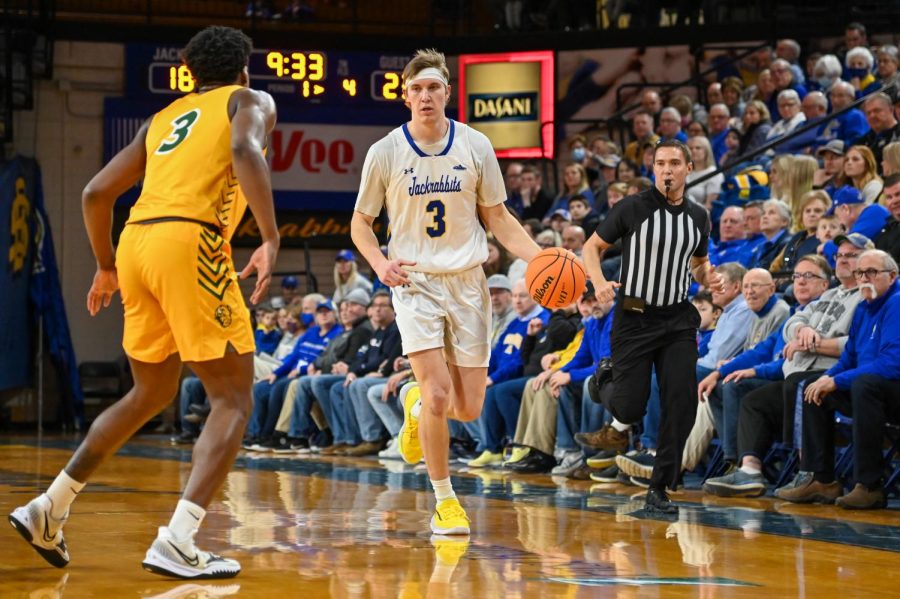 Baylor Scheierman runs the ball up the court against the Bison in a game earlier this year. The 6-foot-6 sophomore leads the Jackrabbits in scoring with an average of 15.5 points per game.

The South Dakota State men’s basketball team is on the road this weekend as they take on in-state rival South Dakota Saturday in Vermillion.

The Jackrabbits (20-4, 11-0 Summit League) are coming off their third win in five days against North Dakota on Monday night. They are currently riding an 11-game win streak and are sitting atop the conference standings.

The last time these two teams met was Jan. 8 at Frost Arena, a game the Jackrabbits won by 19 points. Here’s what to look for in Saturday’s rematch.

The Jackrabbits are currently one of the hottest teams in the country, their 11-game winning streak is tied for the fourth-longest in the nation.

Against last-place North Dakota Monday night, the Jackrabbits didn’t have their most efficient night, shooting 44.3 percent from the field and hitting only five of 18 3-pointers. But they still managed to escape with a 70-64 win.

Monday’s game was a makeup game that got rescheduled due to COVID-19, so it was SDSU’s third game in five days, having also played the previous Thursday and Saturday.

“We’re really proud of our guys for how we’ve dealt with some adversity,” coach Eric Henderson said. “I don’t think we’ve played our best basketball the last week or so, but we were able to find some other ways to win.”

Offensively, the Jackrabbits are the second highest-scoring team in the nation, averaging 87.2 points per game, while shooting the ball at such high efficiency. The Jacks are second in the nation in field goal percentage (52.1%) and they lead the country in three-point percentage (45.1%).

Baylor Scheierman is SDSU’s overall leading scorer, averaging 15.5 points per game. He is also the team’s leader in rebounds per game (8.5) and total assists (105). Former Summit League player of the year Douglas Wilson is having another impressive season, averaging 14.6 points and 5.2 rebounds per game.

Other key players in the Jackrabbit lineup are Zeke Mayo, averaging 9.8 points, Luke Appel with 8.7 points, and Alex Arians with 8.4 points per game.

Led by fourth-year coach Todd Lee, the Coyotes’ latest game was also against UND, and they walked away with a 71-58 win in Vermillion last Saturday.

After starting the season 8-7, USD has won six of its last seven games, the one loss coming in overtime to North Dakota State on Jan. 27. They’ve also had three games postponed this year due to COVID-19.

Despite dealing with injuries and COVID issues all season, USD is still having a pretty good season. They are now 13-8 overall, 6-4 in the conference, and are currently tied for fourth place in the Summit League standings.

USD’s leading scorer this season is Kruz Perrott-Hunt with 15.2 points per game. He is also the team’s leader in assists (49) and 3-pointers (38). Their leading rebounder is Hunter Goodrick, averaging 7.8 a game.

Mason Archambault is USD’s second-leading scorer at 14.4 points, and Tasos Kamateros is chipping in 10 points per game.

As a team, the Coyotes are averaging 74 points per game, good for fifth in the Summit League. On the defensive end, the Coyotes are third in the conference in points allowed per game with 69.5.

“We understand the excitement level there is for Saturday,” Henderson said. “Coach Lee has his group playing very well. They’ve won six of their last seven games, so it should be a great matchup on Saturday.”