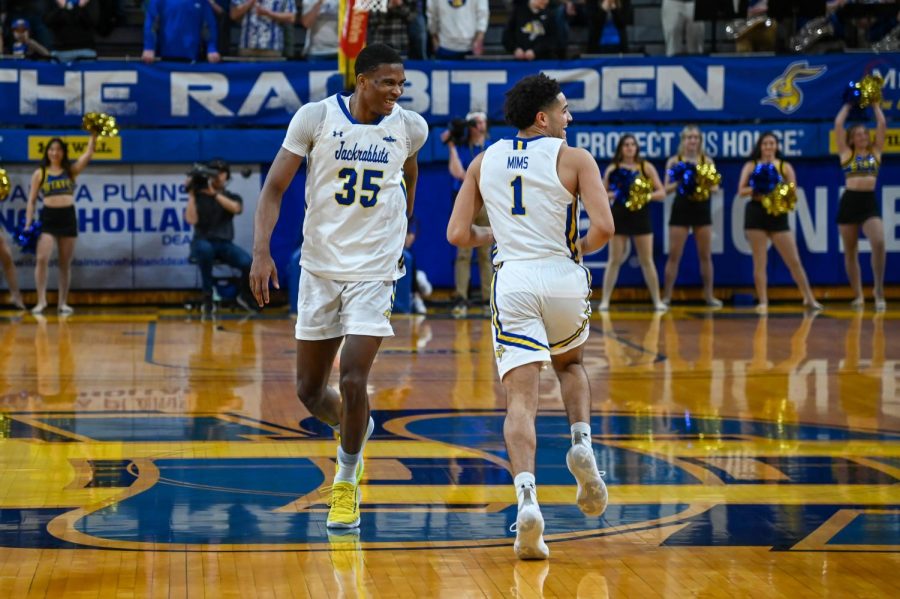 It was a high-scoring back and forth game, and in front of 3,821 fans at Frost Arena, the Jackrabbits (19-4, 10-0) managed to hang on in the game’s final minutes to secure their 10th win in a row as their undefeated reign in the Summit League continues.

The Jackrabbits appeared to have the game won with 21 seconds to go, taking a 79-70 lead. But the Bison just wouldn’t quit, as they cut the lead to six before hitting a desperation three with seconds left. In the end, the Jacks held on to a hard-fought four-point win.

“A lot of credit to both teams,” coach Eric Henderson said. “At the end of the day, I’m just really proud of our guys. The last-minute in a half, in particular, we got four straight stops, limited them to one shot and that was the difference in that game.”

And the Jacks had to close it out without two of their best players down the stretch. Luke Appel fouled out and Douglas Wilson, who scored 23 points in his previous game, hurt his back earlier on a flagrant foul.

Despite being down two key guys, SDSU had to look on other role players. In the final seconds, as NDSU tried to force a comeback, Matt Dentlinger came off the bench and hit four clutch free throws to ice the win.

“We’re confident in Matt coming in when (Douglas and Luke) get in foul trouble,” sophomore guard Baylor Scheierman said. “Matt had four  huge free throws, but he also was probably the MVP of the last minute on defense.”

Throughout the game, neither team could gain much momentum. Neither team ever led by double digits and there were 20 lead changes. After the two teams were tied at halftime, the game continued to be a back-and-forth contest until the Jacks pulled away late.

Baylor Scheierman led the Jacks with 23 points and eight rebounds. In 20 minutes, Wilson had 18 points on 11 shots. Appel chipped in 14 points and a career-high eight rebounds off the bench.

Overall, it wasn’t as efficient a day for SDSU. They shot only 43.3 percent from the field and hit only one three-pointer the entire game. They did get to the free-throw line 29 times and hit 21 of them.

For the Bison, they fall to 14-8 overall and 6-4 in the Summit League. They were led in scoring by Rocky Kreuser, who had 25 points and eight rebounds. Tyree Eady had 13 points and six rebounds and Boden Skunberg added 12.

“This year, us two teams are at the top and competing just like we are a lot of other years,” junior guard Alex Arians said. “You just love playing in these games as a competitor and I’m just glad we got the W.”

Up next for SDSU, they head to Grand Forks, North Dakota Monday, Jan. 31 for a rematch with UND, a team the Jacks beat by 35 on Thursday.