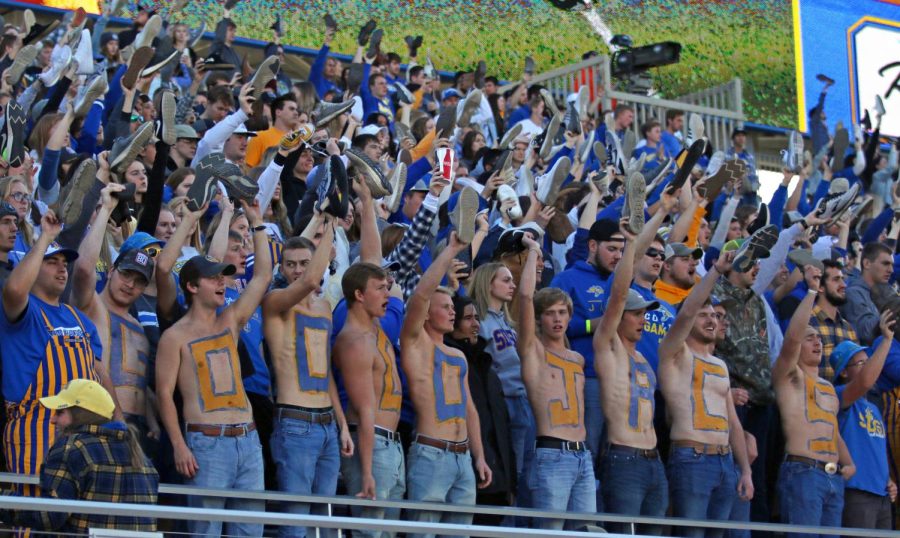 Last semester, two South Dakota State University students stood before the South Dakota Board of Regents in its Dec. 8 meeting to make their case on why alcoholic beverages should be sold at home sporting events, hoping it will improve overall attendance.

“A lot of students who are over 21, would rather go have a beer or two at Cubby’s, or even alumni,” Students Association Senator-At-Large Jonathon Sundet, a sponsor of the resolution, said. “And in fact, we could use that money at SDSU rather than, you know, we’re just sending people away.”

This endeavor started when Brandon Frizzell, treasurer for SDSU’s official student section the Rabbit Den, contacted Sundet about sponsoring an SA resolution on the topic.

“It was just one of those crazy ideas, and I thought about it, and I was like, ‘well, this is just going to be a political mess,’ so I called up Jon,” Frizzell said.

Sundet eventually agreed and said his own experiences at games helped influence his decision.

“I’ve been going to SDSU games, basketball and football, and other athletic events for years,” he said. “I love having that crowd and having that energy at games, and so when I see a huge chunk of the population just not going … I obviously want to help that issue.”

As it stands now, regental universities are not allowed to sell alcoholic beverages except in the case of special events, like performances, conferences or intercollegiate athletics, at the discretion of the Board of Regents, according to South Dakota Codified Law 35-2-6.1 and the board’s Policy 6:14.

And while some alcohol can be purchased during football games, it is only available to those in box seats or loge areas, another name for enclosed areas of seating like box seats or lobbies.

Proponents argue that allowing general admission fans and students 21 and older to purchase alcohol at events would not only improve student attendance, but also would increase revenue for the university.

“A better environment helps us sell more tickets,” Director of Athletics Justin Sell said. “If we’re able to sell more tickets, we get some Jackrabbit Club memberships related to that, which helps our scholarship bill. Our corporate sponsorships become more valuable, so we can generate more dollars in that area.”

An increased attendance could also boost SDSU to a new division in the NCAA. In order to move up to the Football Bowl Subdivision, SDSU would have to have an average home attendance of 15,000 over a two-year period, according to Frizzell.

Additionally, Sundet says selling alcohol at events might cut down on binge drinking and other related concerns.

“This doesn’t turn the venue … into some alcoholic stadium,” he said. “In fact, other schools have seen less alcohol-related incidents and binge drinking when they changed the policy, so this doesn’t create an environment where everyone’s intoxicated out of their minds.”

While the board won’t be discussing the issue again until its next meeting in March, Sell says the school’s experience with hosting the Jack Bash concerts has prepared them for how they could potentially manage alcohol sales.

“We feel, obviously, very confident that we can handle managing sales of alcohol at our venues, without a doubt,” he said.

Sell added that overall, having alcohol at sporting events would only be one part of the effort to increase attendance.

“This is just one piece,” he said. “Everyone wants to pull out all issues and debate them on just a singular issue. … This isn’t the only thing, but it is an important component as we look to move forward to creating a better environment across the board.”