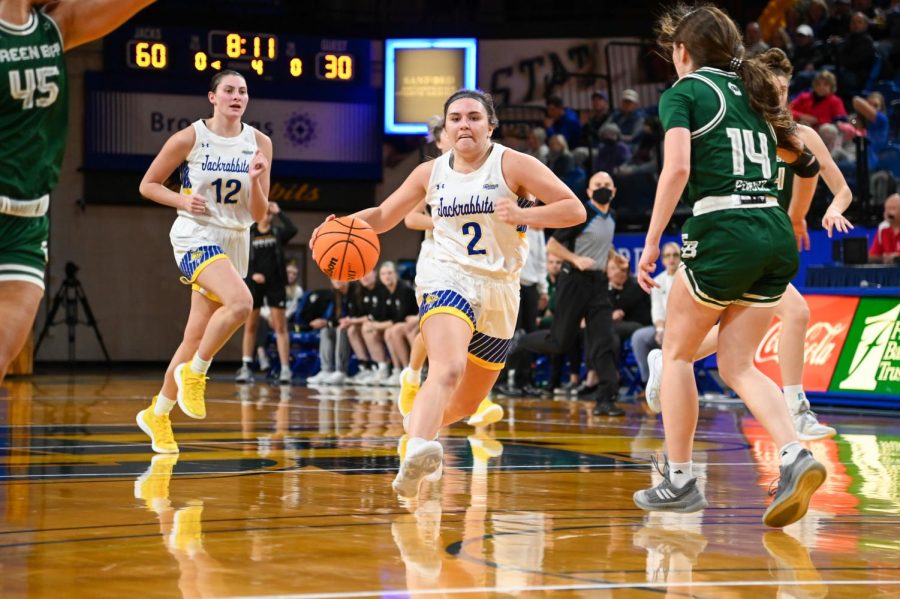 ​​Freshman Paige Meyer drives on a fast break in a game earlier in the year. Meyer played well at the Gulf Coast Showcase, notching 10 points in each of their two games.

They fell to Massachusetts Friday morning 81-63 before picking up a win Saturday against No. 15 UCLA 76-66. Their final game against Charlotte was canceled.

The Jacks have struggled early on in the season, putting up a record of 2-3 prior to the showcase. Until last weekend, they were playing without Preseason Summit League Player of the Year Myah Selland because of an injury suffered last season.

The Jackrabbits opened the Tournament Friday against UMass. The winner advanced to play the winner of Kent State and UCLA.

UMass defeated the Jackrabbits 81-63 to send them to the consolation bracket, where they matched up with UCLA.

SDSU was outscored 29-13 in points off turnovers and 23-6 in second-chance points. The Minutewomen pushed its lead to as much as 27 points in the second half.

Selland made her first appearance of the season and added six points in the 18 minutes of court time she had for the Jackrabbits.

Both Nelson and redshirt junior Lindsey Theuninck scored 11 points for the Jacks. Meyer and Paiton Burckhard had 10 points apiece.

After the first quarter, the Jackrabbits trailed by six but used a 12-point push in the second period to go into halftime with a six-point lead.

The Jacks held off the Bruins and went 8-for-12 in the final 90 seconds to cap off the upset.

Meyer went 6-for-7 from the line and 2-for-9 from the field for her 10 points. She also had six assists and was one of four Jacks to grab four  rebounds.

Theuninck had nine points from beyond the arc and was 3-for-4 from the field along with two free throws. Selland chipped in nine points and three rebounds in her 14 minutes of court time.

Selland reached the 500 career rebounds milestone in the first half of the game.

Saturday’s win is the first SDSU victory out of Frost Arena on the year. Sunday’s game against Charlotte was canceled, leaving the Jackrabbits next game to be Saturday, Dec. 4 at Northern Iowa.