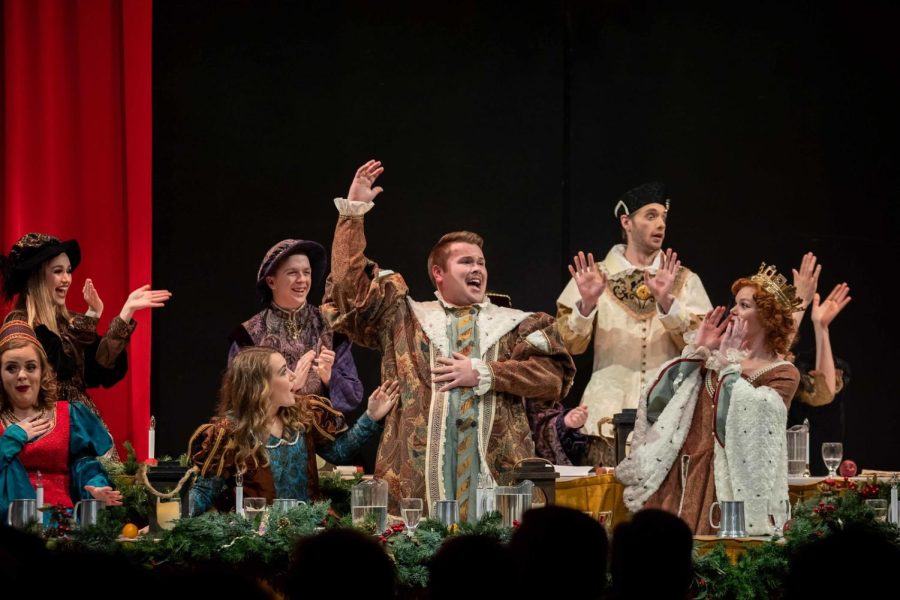 Several Christmas-themed performing arts events will happen at SDSU this December including a Madrigal Dinner, the Annual Holiday Choral Yuletide Concert and a “Christmas Celebration” performance by State University Theatre and Dance.

The Madrigal Dinners are a re-creation of an Elizabethian era Christmas feast and will feature performances by 20 head table singers, the Westminster Singers and the King’s Carolers and the SDSU concert choir.

This year marks the 18th biennial Madrigal Dinner performance. The music will be Christmas and winter-themed, with some songs being from the 15th century.

The dinner theatre performance is expected to be one and a half hours and will include a four-course meal.

For the first time, the dinner will take place in the Volstroff Ballroom in the University Student union, as opposed to the Larson Memorial Concert Hall where it has been held in the past.

Attendees have historically included community members, students, alumni and families, some of who have made it a tradition to attend the performance.

“Alumni from years ago come, and they stand up and sing,” said Laura Diddle, the director of choral activities at SDSU. “People come from four to six hours away, and stay in hotels so they can come to this production because they’ve been coming for 10-12 years.”

“We’ve had people before that have really loved a specific piece. They’ll say ‘we haven’t been able to go see our family for Christmas, seeing your performance really made our day, made our Christmas time,’” Dingman said.

Tickets are $50 and can be purchased from the Oscar Larson Performing Arts Center website.

The annual Holiday Choral Yuletide Concert features performances from the Concert Choir, Choralia and the Statesmen.

The performance will be Sunday, Dec. 12, with two showtimes at 2 p.m. and 5 p.m. in the Larson Concert Memorial Hall. Tickets are $10, and admission is free to students with a student ID.

Each choir group will perform 4-5 pieces individually and together as a mass ensemble with more than 250 musicians.

“For our big pieces, we have a lot of instruments that are going to be playing with us, like a violin, clarinet and string bass just to add more color to the pieces,” said Dingman, who will also be performing in the Yuletide Concert.

Songs will include secular, sacred and winter themes.

“It’s just a marvelous way to get into the Christmas spirit before you go home,”  Diddle said.

“A Christmas Celebration: A New Beginning”

State University Theatre and Dance will feature a Christmas-themed performance called “A Christmas Celebration: A New Beginning,” on Dec. 11 and 12.

The performance will take place in the Oscar Larson Theatre at 7:30 p.m. Ticket prices are $10, but admission is free with a student ID.

The performance, which combines theatrical and dance elements, will explore how the story of Christmas can help the audience reflect on humanity and purpose.

“I think that the Christmas story can help us reflect on how we might give onto others and practice kindness unconditionally,” Melissa Hauschild-Mork, associate professor of dance at SDSU, said.

Different from past performances, the show has been reworked, now including a new scripted narration and pieces.

Changes in the show are mainly due to the disbandment of a community choir that had been traditionally a part of the performance, according to Mork.

“We didn’t really know if we were going to carry on with the performance, because the connection between the community choir and performance has always been a significant presence,” Mork said.

The decision to continue with the performance came due to past support from community members.

“We really felt like we couldn’t let the performance go,” Mork said.

Current students and community members. Traditionally there has also been heavy alumni involvement.

“It’s really fun seeing some of Melissa’s past dancers that have graduated from the program come back because they love the show so much and they love the story so much that it has a special place in the heart,” said Kelsey Werpy, a performer and junior theater major from Brookings.