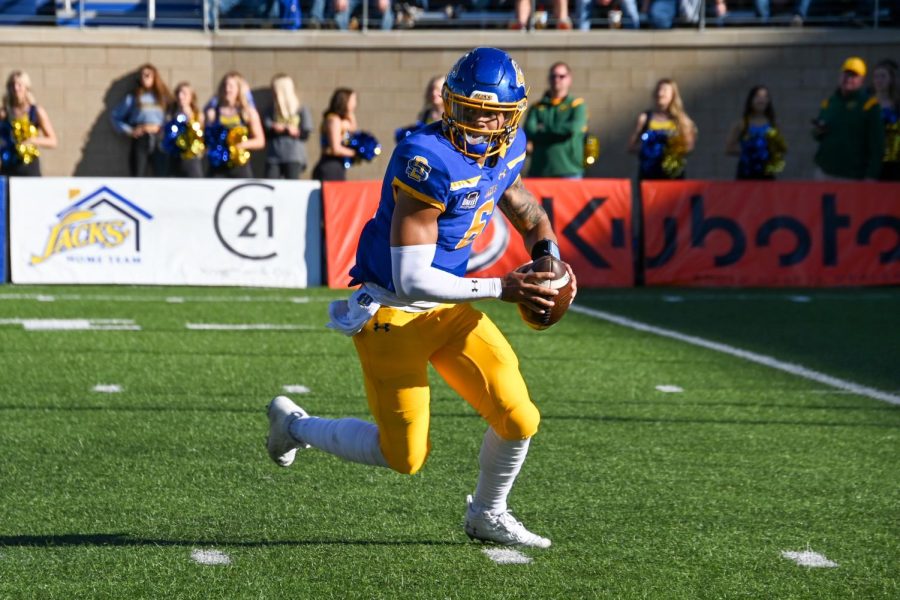 For the first time in nearly two years, the South Dakota Showdown series returned to the DakotaDome Saturday, with the Jackrabbits losing a heartbreaker to South Dakota on a Hail Mary pass on the final play of the game.

After the Jackrabbit defense forced a late turnover on downs, the offense tried to run out the clock. Quarterback Chris Oladokun sailed a pass high and out of bounds to try and burn the final seven seconds on what appeared to be the final play of the game.

But after further review, one second was put back on the game clock and USD quarterback Carson Camp threw a 57-yard desperation heave to the end zone. The ball was tipped, and Jeremiah Webb came down with it, giving USD a stunning 23-20 win.

“We didn’t execute the Hail Mary and knock (the ball) down,” said SDSU coach John Stiegelmeier. “And that’s totally on me.”

This was USD’s second consecutive win over the Jackrabbits, having beaten them 24-21 in 2019.

And, as the regular season nears its end, a lot was on the line for both teams in this latest chapter of the series. For SDSU, a win could have gotten them closer to a top-four seed in the FCS playoffs, and a win for USD would assure them a postseason berth.

On the first play of the game, SDSU cornerback DyShawn Gales intercepted a Camp pass and they cashed in on the interception on a 37-yard field goal from Cole Frahm.

Late in the first quarter, USD looked to answer, but Mason Lorber missed on a 40-yard field goal attempt to tie the game.

The SDSU offense got the ball back and went 77 yards in nine plays, including a 49-yard pass from Chris Oladokun to Jaxon Janke on a 3rd and 8 that was later capped off by an Oladokun 6-yard touchdown pass to tight end Zach Heins that put the Jacks up 10-0.

USD then got the ball back and again attempted to get on the board, but Lorber missed his second kick of the day, this one a 36-yarder.

The Jacks now had the ball and looked to capitalize on the miss, but an Oladokun pass intended for Jaxon Janke was intercepted by USD’s Jacob Matthew. The Coyotes would finally get on the board with 1:16 to go in the first half on an 18-yard touchdown pass from Camp to Caleb Vander Esch to put USD back within three at halftime.

When the Jacks received the second-half kickoff, Frahm hit his second field goal, again a 37-yarder to give SDSU a 13-7 lead.

The Coyotes responded on their next possession when Nate Thomas ran for a 13-yard touchdown and Lorber later hit a 37-yard field goal to give USD a 17-13 lead.

The Jackrabbits answered with a 13 play, 75-yard scoring drive that ended with a Pierre Strong Jr. 4-yard touchdown, and SDSU regained the lead with 6:10 to go in the game.

On the Coyotes’ next offensive possession, they drove to the SDSU 28-yard line when they faced a 4th and 1 with just over two minutes left that they failed to convert. SDSU then tried to run out the clock with a three-point lead.

With seven seconds left, the Jacks faced a fourth down and sent the offense back out to run out the final seven seconds, instead of punting and possibly risking a block.

“We’ve timed that play, and it takes 8-9 seconds if we do the right protection,” Stiegelmeier said. “You’re not going to get a punt blocked with four seconds left, so you just play it safe. I made the call, and we didn’t execute. That’s on me.”

But the Jacks left one second left, and that was all USD needed, hoping for a miracle.

“As crazy as that play was, I really thought our kids deserved to win that football game,” said USD coach Bob Nielson. “Our kids kept believing and they made an unbelievable play at the end.”

For SDSU, Oladokun finished 22-30 for 220 yards, a touchdown, and two interceptions. Strong wasn’t as productive as he was last week against North Dakota State, but he did run for 103 yards on 28 carries and a touchdown.

Jaxon Janke led the team in receiving with 105 yards on seven receptions. On defense, Adam Bock led with 14 total tackles.

For the Coyote offense, Camp was 19-27 for 288 yards, two touchdowns, and an interception. Thomas led the team in rushing with 90 yards and a score on 16 carries. Webb was the receiving leader with 153 yards on six receptions and the game-winning touchdown. On defense Jack Cochrane and Matthew each had an interception.

Up next for the Jackrabbits is their final regular-season game, as they host North Dakota Nov. 20 at Dana J. Dykhouse Stadium. USD travels to Fargo next week to take on North Dakota State.