Barracks from back in the day 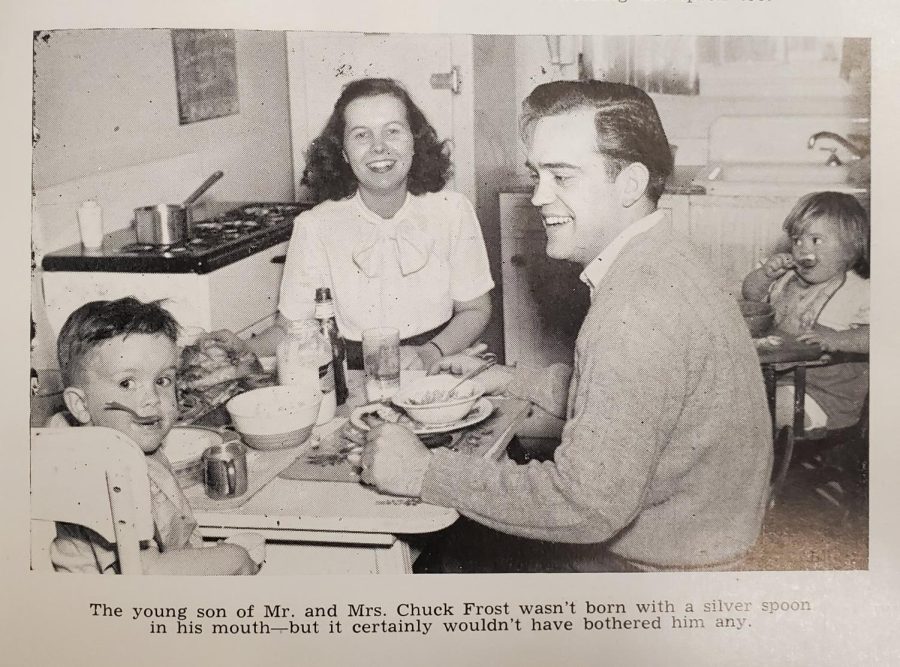 Photo from the "Jack Rabbit" 1947 yearbook

"The young son of Mr. and Mrs. Chuck Frost wasn't born with a silver soon in his mouth--but it certainly wouldn't have bothered him any."

After World War II, South Dakota State College was flush with veterans—and those veterans were in desperate need of a home.

Like many colleges across the country at the time, SDSC (now SDSU) faced a severe housing crisis, and the solution was to temporarily bring in converted Quonset huts and military style barracks—SDSC went with the latter.

“Before the war, the married men on the campus (were) the exception rather than the rule,” read the 1948 Jack Rabbit yearbook.

This wasn’t the first time State had to accommodate the influx of students after a war. East Men’s Hall was a dormitory built in 1921, where the alumni center is now. Its purpose was to house ex-G.I.’s who were disabled while in World

War I and wanted to either start or continue their education here.

By the end of World War II, there were only four dormitories on campus: East Men’s Hall, Scobey Hall, Wecota and Wenona.

Many soldiers who came to campus after World War II were married and were starting families—thus the need for the married students’ housing, specifically.

Records from the Hilton M. Briggs Library make it hard to determine exactly how many units and how many families lived in these wood-frame barracks.

An initial order for government surplus housing in 1946 requested 21 converted barracks and 32 “Pickstown” houses. One record mentioned there were 148 families housed in them. Another record said there were 38 buildings, some with metal roofs. Each unit had two to four apartments, and in total they were said to house 108 students and their families.

A 1961 graduate who commented on the Campus Evolution Map said the area was commonly called “fertile acres” because there were so many children.

Yearbooks from the late 1940s paint a “slice of life” of the veterans who lived with their families. Many wives worked on campus or took the “Bunny Bus” into town for work to supplement the monthly allotment from the G.I. Bill. Photos show the families playing games, eating dinner or even washing dishes together in their little homes.

The barracks of College Grove were slowly taken down in groups between 1961 and 1975, even though they were only meant to last five years from their construction. The first handful were removed to make space for Mathews Hall.

A section of units came out in 1970 for the Stanley J. Marshall Center, which was completed in 1973, the same year another large section was removed for the new Student Union (1974). Then there were only 11 barracks left, located just south of where the Student Health Clinic would go, and by 1975, they too were gone from campus.

So while the barracks of College Grove weren’t an exclusive residence for veterans during their time on campus, they certainly started out as a way to accommodate the heroes of South Dakota State.

Special thanks to Michele Christian and Crystal J. Gamradt with the SDSU Archives & Special Collections. Other information obtained from “South Dakota STate University: A Pictorial History 1881-2006” by John E. Miller, “A History of South Dakota State University 1884-1975” by J. Howard Kramer, “The College on the Hill” by Amy Dunkle and the 1946-1949 editions of the “Jack Rabbit” yearbook.