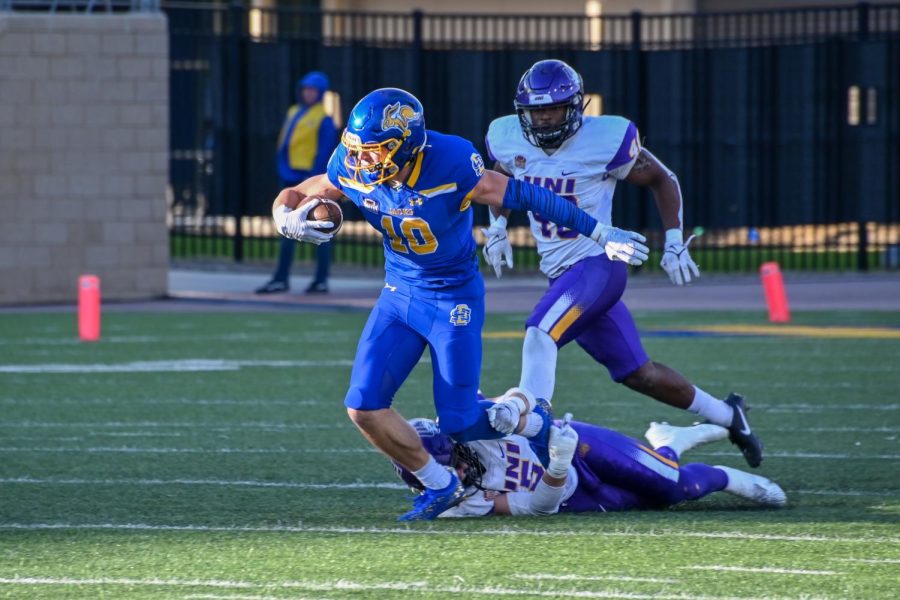 The Dakota Marker trophy is on the line for South Dakota State, as the Jackrabbits return home to take on the undefeated North Dakota State Bison Nov. 6.

The No. 9 Jackrabbits (6-2, 3-2 Missouri Valley Football Conference) hope to defend the rivalry trophy they won last spring with a 27-17 win over NDSU in the Fargodome.

This will be the 108th overall regular-season meeting between the two teams and the 18th since the marker was introduced in 2004.

North Dakota State leads the all-time regular-season series 59-43 with five ties, and they lead the trophy series 10-7. The two teams have also met four times in the FCS playoffs, with the Bison winning all four games.

Last week, the Jackrabbits bounced back from their Hobo Day loss to UNI with a 47-16 rout of Youngstown State on the road.

SDSU has been a dominant team away from home all season. They are 4-0 on the road, winning those games by an average of nearly 30 points a game.

But the Jacks have had recent struggles at home. They started their home schedule strong against subpar opponents. In their home opener, they cruised to a 52-7 win over Lindenwood, a Division II school. They faced a winless Dixie State squad two weeks later and walked away with an easy 55-7 victory.

Then Southern Illinois came to town Nov. 9, and despite jumping out to a 20-0 lead, the Jacks failed to hold on to it, falling 42-41 to the Salukis in overtime. A couple weeks later, SDSU returned home for Hobo Day and were outplayed by a tough Panthers team and lost 26-17.

After being held under 40 points for the first time this season against UNI, the Jackrabbit offense returned to form last week against the Penguins, putting up 553 yards of total offense, including nearly 300 on the ground.

Overall, the SDSU offense is averaging 42.7 points per game, which is third in the FCS. They also boast a top-15 defense nationally, allowing 17.25 points per game.

“We’re going to have to execute, be patient and understand that we’re not going to get 20-30 yard plays against a really good defense like theirs,” Stiegelmeier said.

This season, the Bison are eyeing to win their ninth national championship in the last 11 seasons. And they’re off to a good start with a 5-0 record in the conference.

After an easy 35-7 win at Towson, the Bison played their first close game of the season, opening their MVFC schedule with a 16-10 win against the 10th-ranked North Dakota. Then came homecoming for the Bison, which was also against UNI. They won that game 34-20.

The Bison followed that up with a 20-0 win at Illinois State. They then faced another tough battle against No. 17 Missouri State. After trailing by a touchdown in the fourth quarter, NDSU scored 14 straight points to beat the Bears 27-20.

In their latest game against Indiana State, the Bison nearly posted their third shutout of the season but allowed a safety in the fourth quarter. They still dominated to a 44-2 win.

NDSU’s defense has been dominant all season, as they have the top defense in the FCS, allowing only 8.12 points per game.

“This week, we’re going to play a very South Dakota State football team,” said NDSU coach Matt Entz, in his third season with the Bison. “If you look at their product on film and their roster, you don’t see a lot of holes. It’ll be challenging for us.”

Last week against the Penguins, SDSU’s offense looked to get its mojo back, thanks to performances by usual key starters.

Quarterback Chris Oladokun didn’t have his best game but was solid. He finished 16-22 for 260 yards, a touchdown, and an interception, his third of the season.

Running back Pierre Strong Jr. has been SDSU’s best offensive player this season, and it showed against YSU, rushing for 163 yards and two touchdowns. With that performance, he is now third in the FCS in rushing yards this season with 986.

Freshman Amar Johnson added 87 rushing yards and a touchdown against YSU, as he continues to be a valuable piece of the Jackrabbit offense without Isaiah Davis. Jaxon Janke was their leading receiver last week, with 111 yards on seven receptions. Zach Heins also caught his fourth touchdown of the season last week.

On defense, Adam Bock has led the way. This season, he has 61 total tackles, which leads the team by more than double. Michael Griffin and Graham Spalding are second with 30 each. Last week, Malik Lofton got his second interception of the season.

This season, the Jack’s best interior lineman has been Reece Winkelman, who leads the team in tackles for loss with ten and sacks with 4.5.

Miller then started against Indiana State the following week over Quincy Patterson, a dual-threat quarterback who started the first seven games for NDSU.

Since Miller started taking snaps for the Bison offense, their passing game has improved. Miller’s season stats are 21-29 for 336 yards, six touchdowns and an interception.

But NDSU’s biggest strength this season has been its defense. Jackson Hankey, a member of the 2021 Butkus award watch list, an award given to the top linebacker in the country, leads the Bison in tackles with 50.

Eli Mostaert leads the team with 6.5 tackles for loss and 5.5 sacks. Jasir Cox leads the Bison with three interceptions.

“Big week and great rivalry, and two really good football teams,” Stiegelmeier said. “We’re excited to have them come to our place and ideally experience a great crowd and a tough environment.”