Jacks bounce back with impressive wins 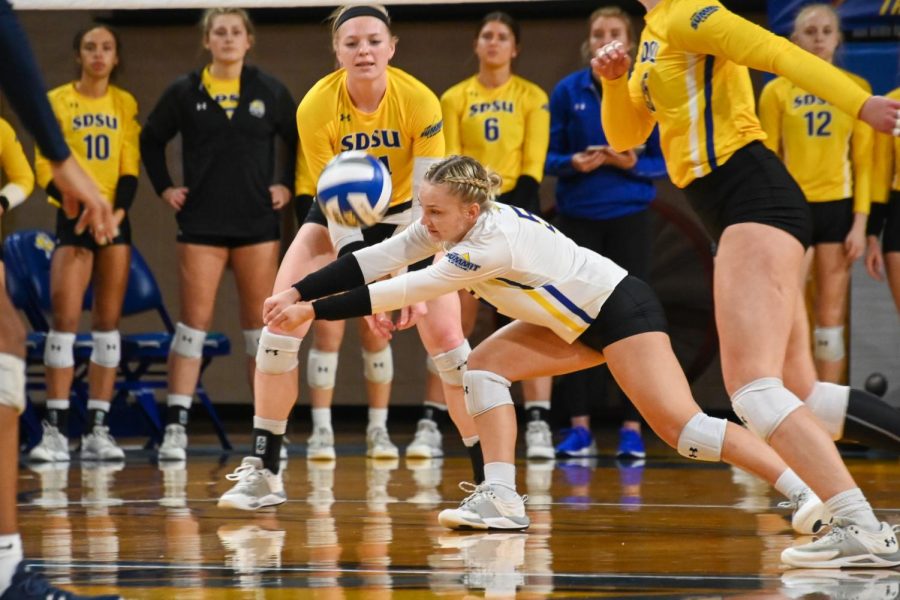 Senior Tatum Pickar dives for a dig in their win over ORU. Pickar is the team-leader in digs with 242 this season.

​​The Jackrabbits volleyball team is looking to extend its two-game winning streak after a successful homestand at Frost Arena.

The Jacks lost on the road to Oral Roberts and Kansas City earlier in the season, but that all changed this past week when the Summit League foes came to Brookings.

Freshmen Elyse Winter, Ella Thompson and Jasmine Weidemann stepped up in the Oral Roberts game. Thompson had eight kills and two blocks, and Winter followed with six kills. Weidemann also played her part in the win with 50 assists and eight digs.

“The five-set win against Oral Roberts was definitely not a good performance, but we found a way to win,” coach Dan Georgalas said. “We won ugly.”

The Jacks took an early lead in the match against Kansas City and did not lose the advantage until the beginning of the third set.

Set two also went to the Jacks. Junior Carly Wedel entered the game and contributed two blocks and one tip that resulted in a kill. Andrews, Stitt, Burk and Winter all had kills.

SDSU did not let Kansas City have the momentum for long. Stitt and Blau started set four with back-to-back kills. That was not the end of Blau though. She later scored with three more kills and two blocks. Stitt had consecutive ace serves at the end of the set that gave the Jacks the lead they needed to win the game.

Both Burk and Stitt achieved double-doubles in the game. Burk had 19 kills followed by Stitt with 16. They each had 17 digs.

“Here today, I thought we were really focused and engaged in our process, and we played really strong,” Georgalas said.

The Jacks travel to St. Thomas and Western Illinois this week. They will return home Nov. 11 to host Omaha at 7 p.m. and Denver Nov. 13 at 1 p.