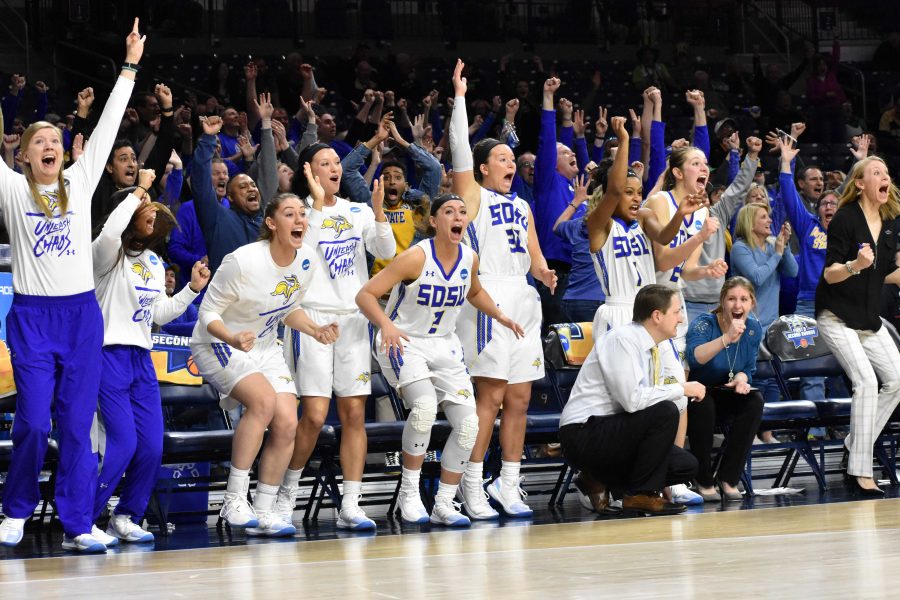 The South Dakota State women’s basketball season came to an end March 16 after an 81-74 overtime loss against Villanova in Notre Dame, Indiana. While the team is disappointed in not making it further in the tournament, it has a lot to be proud of looking back on the 2017-18 season.

The Jacks finished the season 26-7 overall and had a 12-2 conference record. They averaged 78.2 points per game, which was second best in the Summit League.

Two wins against power five schools in Oklahoma and North C State, as well as nearly taking down the ACC Champion and No. 3 ranked Louisville earlier in the season signaled that the Jacks would be a team to look out for in 2017-18.

Junior guard Macy Miller, who spent most of last season on the sideline due to an ACL tear, won her second Summit League Player of the Year award.

Head coach Aaron Johnston was upset by the loss, but couldn’t overlook the team’s accomplishments.

“I think every time you lose at the end you feel like it’s a tough way to go out. It was a phenomenal year for many reasons,” Johnston said. “We had some great individual accomplishments, some great team accomplishments and some great wins. Our goal in the NCAA Tournament was to try and make a run. It was disappointing that we didn’t, but the way the season ended doesn’t make us feel different about the other good things that happened during the year.”

The Jacks No. 8 seed in the 2018 NCAA Tournament was the second-highest seed in program history.

“It was obviously something that was very special for our program. Just being able to see that we are getting the respect from teams and people across the country will definitely be a big motivating factor for us going forward.”

Looking ahead to next season, the Jacks will lose two starters in senior forward Ellie Thompson and senior guard Alexis Alexander, but will return their top two scorers in Macy Miller and Madison Guebert. The junior guard duo finished the season first and fourth in the conference in scoring, respectively.

Freshman forward Myah Selland, junior forward Tagyn Larson, sophomore guard Rylie Cascio Jensen, junior guard Sydney Palmer and freshman forward Tylee Irwin are all expected to be back next season. All of them were pivotal players for the Jacks.

“Going into the offseason, we have a lot of things we can improve on,” Guebert said. “But we are excited with everyone we have coming back, especially with bringing back all of the experience we had from this season.”