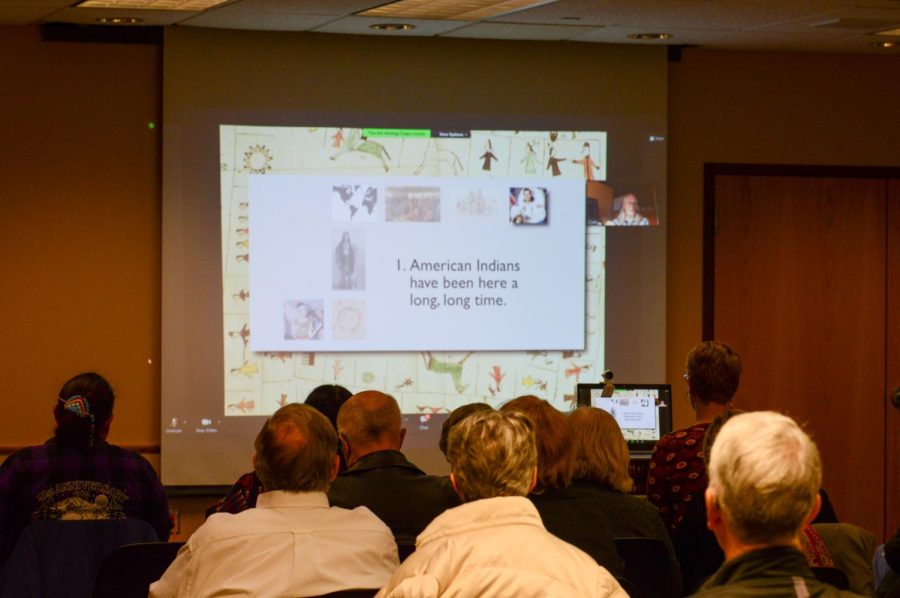 The Brookings Public Library will be hosting a series of speakers throughout November in celebration of Native American Heritage Month.

“We started this back in 2019,” Mikaela Neubauer, community services coordinator for the library, said. “It started a little small, and now we’ve grown it to five speakers and we got a grant for it this year from the South Dakota Humanities Council.”

The series kicked off with Craig Howe, director of the Center for American Indian Research and Native Studies and a member of the Oglala Sioux Tribe, Nov. 2. His talk, titled “Seven Things Everyone Should Know About American Indians in South Dakota,” discussed topics like language and relationships with the land to promote knowledge and understanding of Native American issues and general culture.

The series will continue with Starr Chief Eagle, a member of the Sicangu (Rosebud) Lakota Sioux Tribe and traditional hoop dancer. She will be giving a hoop dancing demonstration and interactive presentation Nov. 9 to teach about Lakota language, dance and other aspects of Lakota culture.

Following Chief Eagle, Taté Walker will present their talk, “Violence Against Indigenous Relatives: Settler Colonialism’s Impacts Then and Now,” Nov. 16, focusing on the impacts of colonialism on Indigenous health. Walker is a Two Spirit activist and author, Mniconjou Lakota and a member of the Cheyenne River Sioux Tribe.

Finally, Jerome Kills Small, an Oglala Sioux storyteller and oral historian, will wrap up the series Nov. 30 with his presentation, “Water: Lakota Spirituality and Science,” which discusses the role water plays in Lakota spirituality and how spiritual beliefs and science can complement each other.

Neubauer said she was inspired to start the program because the library had previously only hosted white speakers.

“I kind of saw a gap in the library’s diversity programming,” she said. “I just wanted to shake things up a bit, and I saw we’ve never celebrated anything like that.”

She also said that the events allow for more education among the Brookings community.

“We want to make sure that people have access to these stories,” she said. “This is the platform for the Native American community and the speakers that we feature to tell their stories, and for the community, who might not get the change to hear these stories. To come learn something new.”

Walker said that hosting programs like the speaker series allows for more awareness of struggles faced by Indigenous communities.

“Programs like what Brookings Public Library is hosting for Native American Heritage Month are important to build awareness of the robust communities that were here prior to colonization, and to embrace these same communities that continue to flourish despite continued systemic oppression from the settler governments and institutions,” they said.

They added that it is important to broaden hosting programs like this series outside of NAHM, as well.

Bassett shares this sentiment, saying that for Indigenous people, every month is Native American Heritage Month.

“We can’t just silo these kinds of things to one particular month, just like we can’t do it for Spanish heritage month,” she said. “It does help give a specific focus, and I think also being off campus is helpful and important to draw in community members who might not otherwise come to a campus event.”

The presentations will take place at 6:30 p.m. every Tuesday in November, and those interested can attend either in person or over Zoom. More information can be found on the library’s events calendar on their website.