Fleet of robots arrive at SDSU 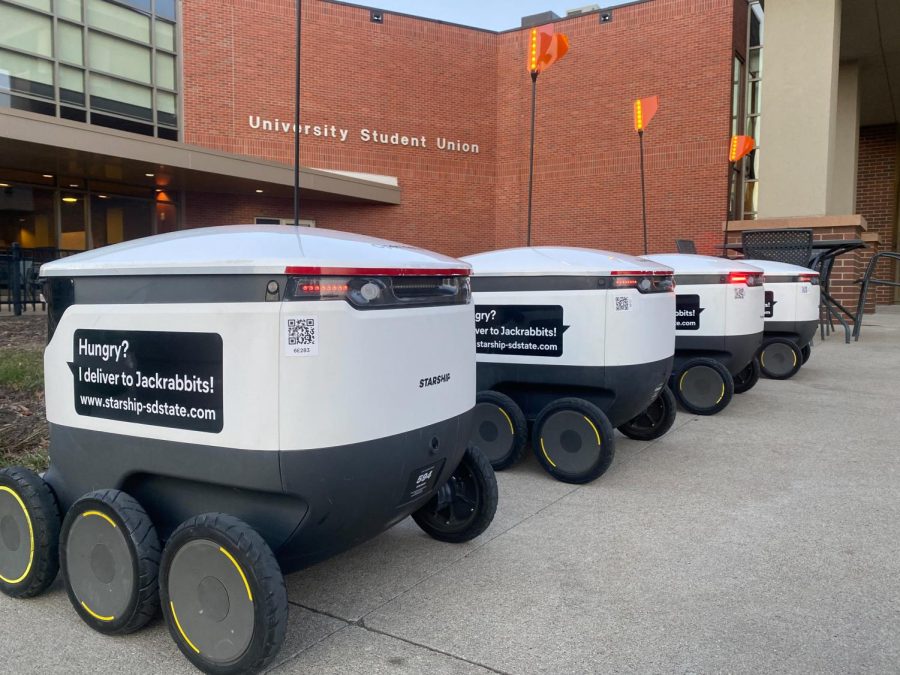 Rolling around campus are Starship self-driving food and item delivery robots. These bots roam around over 20 U.S. campuses, have traveled over 2,700,000 miles, completed over 2,000,000 commercial deliveries, and have over 1,000 autonomous robots in their fleet.

Each bot is built with ultrasonic sensors, 12 cameras, radar, GPS, an alarm system, reflectors, a signal flag and TOF cameras which allow for efficient, theft-free, accident-free travel. Using artificial intelligence, the robots map their environment to the nearest inch by using sensors to travel on sidewalks, learn traffic flow and navigate around obstacles.

All of the delivery bots are capable of climbing curbs, traveling through snow, withstanding rain, seeing in the dark and avoiding foot, bike and vehicle traffic.

Starship Technologies’ delivery bots have also been implemented at the University of Wisconsin in Madison, Michaela Willis, vice president for Student Affairs & Enrollment Management, said. “Equally cold, equally harsh,” she said about their ability to navigate in Midwest weather conditions.

The presence of these high-tech droids on campus has caused quite a stir on the popular app Yik Yak, which allows users to anonymously connect with everyone within 5 miles.

One user said, “I’m going to steal one of those robots and keep it as a pet.” Another user said, “If you saw me kicking the robot, no you didn’t.”

South Dakota State University students have been posting mixed reviews on the bots. “These robots are giving me WALL-E vibes and idk how to feel,” and “Y’all are really tryna start the robot revolution early,” are just a few comments students have made on the app.

Starship Technologies’ delivery robots may seem like something out of “Black Mirror” or “WALL-E,” but these robots show no signs of turning on humanity (for now). These small (2.3 x 1.9 x 1.9 ft.) bots travel at just 4 mph and are currently incapable of climbing flights of stairs, so, in the case of a robot takeover, we will surely be able to outrun them and stay safe by taking the higher ground.

Although the small and slightly Orwellian bots may seem stealable or kickable, officials strongly advise that you do not carry out your primal rage on the Starship robots. Jennifer Novotny, senior director for the Student Union, warned students not to abduct the robots, adding that they have cameras on them for protection.

In addition to the security cameras, the bots also lock any ordered items inside and can only be opened with the mobile phone of the customer who ordered the items.

“Officially, 16 Starship robots will be in use on campus, starting Nov. 8,” Chief of Staff Blake Pulse said at the SA meeting.

A $1.99 service charge will be taken from the student’s meal plan with each order using the delivery robots.

Look out for a more in-depth article on how students can use the bots coming soon.