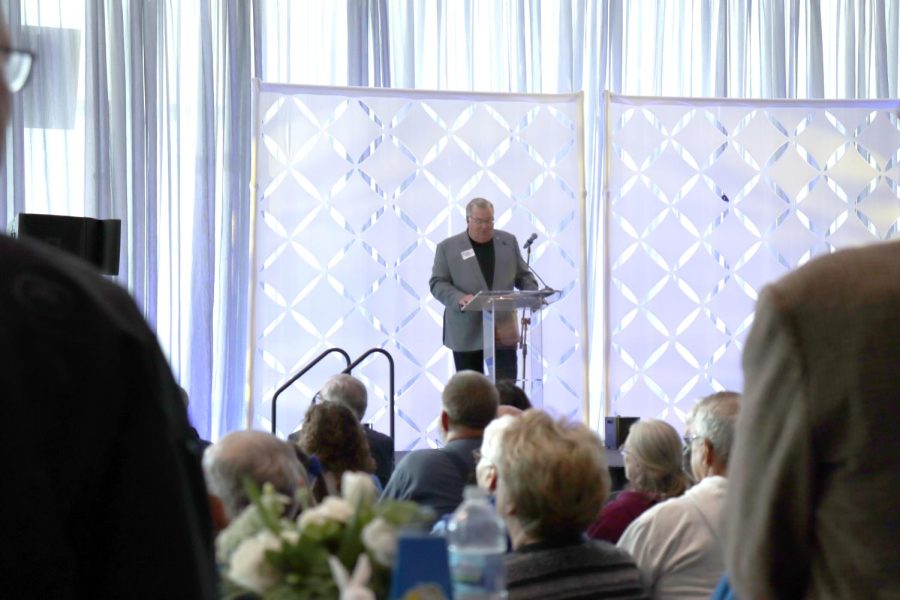 Dana Dykhouse, CEO of First PREMIER Bank and one of the campaign’s chairmen, said more than 22,000 individual donors already have committed $341,787,940 of the $500 million goal. Thus far, the campaign has been in the leadership, or private phase, which started when the Foundation began allocating funds toward the campaign in early 2017.

The announcement last Thursday was the official shift to the public phase of the campaign. According to Foundation President and CEO Steve Erpenbach, this phase will take two to two and a half years to raise the other $160 million.

“Our campaign leadership, plus the response that we had from our donors, this convinced us we could do $500 million,” Erpenbach said. “This being a people-centered campaign really resonated with people so we’ve had the success and we’ve raised $341 million, so we felt very comfortable going with the $500.”

The primary areas “Bold & Blue” will reach are the people, places, traditions and innovations of SDSU, Erpenbach said.

The “people” aspect of the campaign focuses on scholarships for students and endowed positions for faculty. Raising money for the First Bank and Trust Arena and Raven Precision Ag Center are some of the “places” the campaign is funding. “Traditions” include the Pride of the Dakotas and Hobo Day where “innovation” covers advancements in research-focused areas like the Precision Ag program.

The “Bold & Blue” campaign, Erpenbach said, will be a lot more people-oriented than the first two campaigns, with an emphasis on endowed professorships.

During his speech at the announcement in Club 71 of the Dana J. Dykhouse Stadium, President Barry Dunn noted the influx of endowed professors at SDSU over the last few years.

“The more endowed faculty we get, the better faculty we’ll get,” he told The Collegian. “The more named departments and named colleges we have, the better the student experience will be in class. We’re going to take really great faculty and elevate it over time.”

Jerome J. Lohr, the namesake for the College of Engineering, committed $5 million to create an endowed dean position for the college in August. Each year, the current and future dean of engineering will receive $200,000 to use toward the betterment of the college through research projects.

Lohr’s $5 million donation was counted in the $341 million running total for the campaign.

He is also an honorary “Bold & Blue” chairman and he said he thinks the emphasis on endowed professorships is the next step to enhancing the university.

“With the first campaign, we needed to start the culture of giving and then we desperately needed facilities like laboratories,” Lohr said. “Then the second campaign we started the Jackrabbit Guarantee, which is a scholarship for students. Now, major universities, like we’re becoming, have endowed professorships. There are two benefits to that, one is that it’s very attractive to potential professors and it also gives them start-up funds each year.”