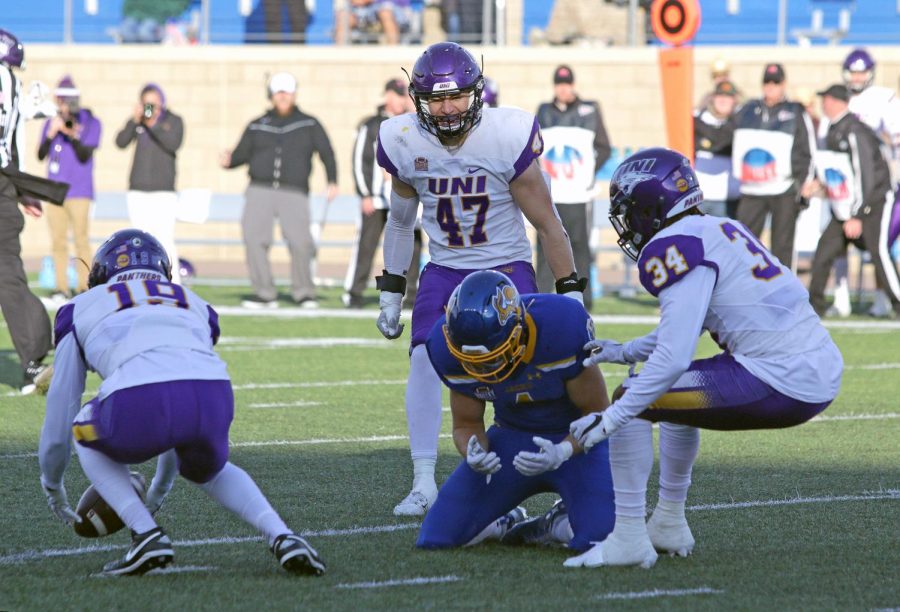 And despite having plenty of chances to gain momentum throughout the game, the Jacks had too many dropped passes and went only 5-19 on third down and 2-6 on fourth down.

“Everybody was ready to go, and we wanted to put on a show for the fans,” said safety Michael Griffin. “It’s a tough loss, but we’ve got to be ready to respond.”

The Jackrabbits responded with a touchdown of their own, a 12-yard strike from Oladokun to Jadon Janke. After the two teams traded field goals, including a 55-yard kick from UNI kicker Matthew Cook, it was 10-10 in the second quarter.

Then, a 40-yard touchdown pass from Theo Day to Isaiah Weston and two more Cook field goals gave the Panthers 13 unanswered points and a 23-10 lead midway through the third quarter.

Cook, who went 4-for-4 on his field goals, proved to be the difference-maker in the game. On top of the 55-yarder he hit in the first quarter, Cook’s final field goal, a 51-yarder in the fourth quarter, gave the Panthers a 26-17 lead, which would later seal the win for UNI.

“We did not come close to playing our best football,” said coach John Stiegelmeier. “I’ve never so many drops or double coverages that turned into long pass completions. And I need to figure out why that went on because we have way too many people that work way too hard for that to happen.”

The Jackrabbit offense, who scored more than 40 points in every game this season before Saturday, didn’t look like their usual dominant selves. Coming away with only 17 points, the Jacks had opportunities scored more, but crucial dropped passes, especially in the fourth quarter, stalled any other potential scoring threats.

“At the end of the day, it just came down to execution,” Oladokun said. “And they executed better than us.”

Oladokun finished 24-53 for 294 yards. Pierre Strong, who was third in the nation in rushing coming into the game, was held to only 53 yards on nine attempts. Tucker Kraft caught nine balls for 123 yards to lead SDSU in receiving.

SDSU’s defense, who’s played short-handed all season, were without all-Americans Don Gardner and Logan Backhaus, along with defensive end Quinton Hicks due to injuries. But after a rough start, they seemed to settle down throughout the second half, getting key stops to keep them in the game. Graham Spalding led the defense with 12 tackles, along with an interception.

UNI’s offense fared a little better running the football, as they totaled 103 yards on the ground. Day was 11-21 for 232 yards and an interception. Weston was their leading receiver, catching four balls for 125 yards.

For the Jacks, the rest of their season doesn’t get any easier as they may have to fight just to make the playoffs. They are on the road next week to take on Youngstown State Oct. 30. For UNI, their playoff hopes are still alive, and they travel back to the UNI-Dome to take on No. 4 Southern Illinois.