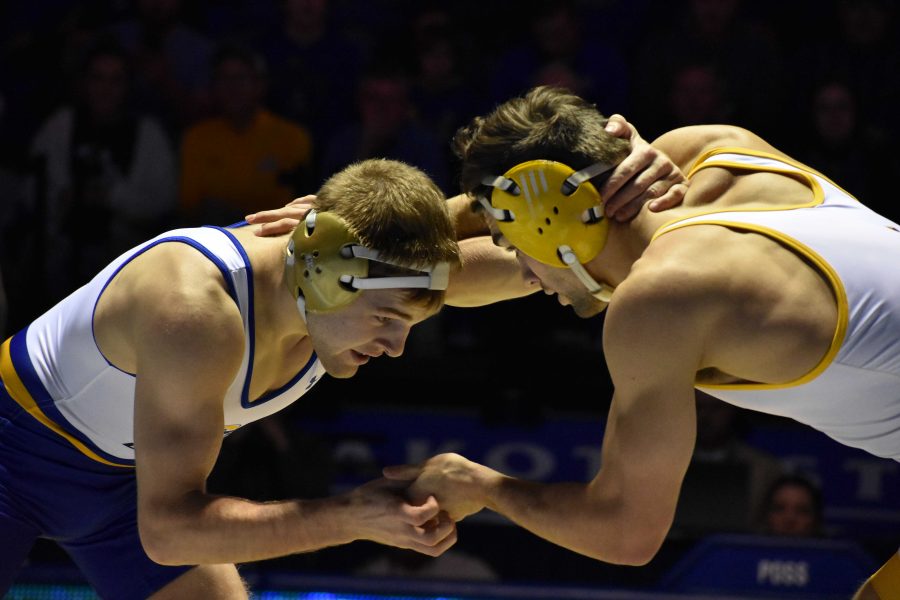 South Dakota State continued to reach new heights in wrestling after they left the NCAA Tournament with three All-Americans and a National Champion.

“Setting records for the program and creating history—that’s what it’s all about,” head coach Chris Bono said.

Moving forward, having their name on that list could improve their chances of landing a big recruit, Bono said.

“It will help us with recruiting a fan base,” he said. “It will put Brookings, South Dakota, on the map.

As a team, the Jacks placed 12th at the NCAA Tournament with 42 team points, which was the highest finish for all Big 12 teams.

Looking ahead to next year, the Jacks will lose major contributors and two of their three All-Americans in Luke Zilverberg and David Kocer.

SDSU will also lose heavyweight Alex Macki to graduation. Macki finished his senior year with a 14-14 record. Macki will finish his collegiate career with a 42-62 mark.

The Jacks will look to replace the seniors they lose with a good recruiting class.

The 2018 recruiting class is headlined by Alex Lloyd of Shakopee, Minnesota, who has won three straight Minnesota State titles. Lloyd won his first two at the 145-weight class and his most recent at the 152-weight class.

Peyton Robb of Owatonna, Minnesota, is another recruit the Jacks could utilize next season. He won three state titles in high school.

Despite having a top recruiting class, the Jacks will also look to build off seasons from freshman Connor Brown and sophomores Henry Pohlmeyer and Martin Mueller, all of whom qualified for the NCAA Tournament.

Brown went 1-2 in the NCAA tournament and was eliminated with a 10-4 loss against Zeke Moisey of West Virginia. Brown finished his freshman year with a record of 23-16.

Pohlmeyer also went 1-2 in the NCAA Tournament, losing on an 8-0 major decision to Kevin Jack of NC State in his final match of the season. Pohlmeyer finished the season with a 23-11 record.

Mueller went 0-2 in the NCAA Tournament, falling to Bo Nickal of Penn State, who went on to win the 184-weight class division, in the first round. Mueller will look to build off of his breakout sophomore season in which he finished with a 24-8 record.

Despite having one of the most successful seasons in school history, Bono made it apparent that the Jacks will not be satisfied with these results next year, and will look to improve to a top four finish in the NCAA Tournament. Preparation has already begun.

“We started (Monday),” Bono said with a smile.