Marie Robbins: Carrying on the legacy of Grand Pooba 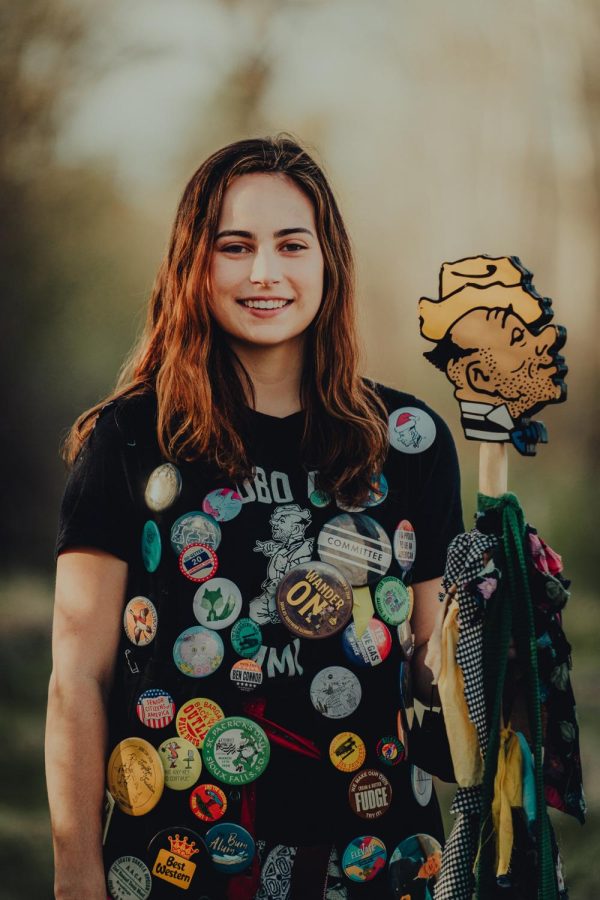 For senior Marie Robbins, carrying on the Hobo Day tradition as Grand Pooba means celebrating all the opportunities South Dakota State has to offer.

And just what is the Grand Pooba’s role in all of this? As Grand Pooba, Robbins is the head of the 18-member Hobo Day Committee, meaning she’s in charge of coordinating with all the other committee members to put on the activities and events that spread Jackrabbit pride throughout Hobo Day week.

It’s a legacy she strives to live up to.

“Hobo Day brings back alumni from decades before us who still have that same Jackrabbit spirit,” Robbins said, “and they’re still so proud of all of the things they accomplished at SDSU and beyond, so that tradition is really why I want it [Hobo Day week] to be great.”

Robbins first decided to join the committee when she recognized a girl who was from the FFA.

“I didn’t know her very well,” Robbins said. “I was just following her on Instagram. But she would always post these fun pictures of her in the committee doing fun things like being in parades, driving the Bummobile—and I really liked that. I thought, ‘That looks like the most fun thing in the entire world.’”

So when she joined the committee in the spring of her freshman year, Robbins became the transportation coordinator on the parade team. Last year, she was the parade assistant pooba, but then the parade was canceled because of COVID-19.

But the committee didn’t let that stop them from trying to spread the Hobo Day cheer.

One of the things Robbins did last year on the committee was work with University Marketing and Communications to create the Hobo Day video.

“We tried not to focus on what we couldn’t do, but what we could do,” she said, and she attributes a lot of the positivity to last year’s Grand Pooba Kylee Donnelly.

“I never saw her mad or frustrated that we couldn’t do something…so that was really cool to have that leadership influence from her,” Robbins said.

Each year’s Grand Pooba is chosen by the previous year’s after the interested committee members fill out an application and go through a vigorous interview process. Then they must present their vision plan and answer questions from the groups of interviewers, so it was Donnelly who chose Robbins.

One of the challenges Robbins has experienced this year is marketing the Hobo Day events to underclassmen who haven’t had a chance to experience them pre-pandemic, and that challenge extends to the sophomores on the committee.

Robbins further described the committee as being one big family, with members often helping each other with homework.

“We all support each other no matter what it might be in.”

In addition to doing her classes and the committee, she is also involved with Alpha Zeta and Little I, and she works at Dakota Abstract & Title Company here in Brookings.

To help keep things in order, Robbins is always using her Outlook calendar and setting reminders in her phone for meetings and such. She also says finding a balance between personal life and everything else is key, which is why she does things like trying not to answer emails on the weekends.

“I’ve gotten better at knowing when you need a break,” she said.

But the other committee members, she says, are amazing at their jobs and help keep things running smoothly for everyone.

“One coordinator can’t put on an event by themselves…we all have to come together to make sure that all the events are successful, so that’s really where we lean on each other.”

Their friends and family have also been an enormous support when it comes to outside things, whether that’s having parents bring food for the whole committee or simply being there when things get stressful. When she was transportation coordinator, Robbins had even asked her friends to help drive cars in the parade, and they came through.

Robbins says that what matters most to her is her friends and family, and she really values creating relationships with others, which is why she loves the community aspect of being part of the committee.

She also loves agriculture and SDSU’s strong ag roots, which was the reason why she chose this school.

Growing up on a small farm in Aurora with her parents and younger sister, Robbins always knew she wanted to do something related to ag, so a double major in ag communications and ag business was just the right fit.

In high school, Robbins was involved in cross country, basketball, track, FFA, 4-H and oral interpretation. She loves being outside and traveling, specifically when that involves nature-related road trips or visiting historical places.

She even traveled to Spain and Portugal for an FFA seminar (the International Leadership Seminar of State Officers) just before the pandemic and loved the experience, just like how she loves the experience of being a Grand Pooba.

Being Grand Pooba has also provided Robbins with strong leadership skills, which she intends to use in her future career. It’s taught her valuable professional skills like running meetings, setting schedules and sending emails. She also said the team structure of the committee was like being in a workplace setting.

“The friendships that you make on the committee are so genuine and fun and awesome, and I think that is one of my favorite parts of being on the Hobo Day Committee,” Robbins said.

Her favorite event during Hobo Day week is the parade, specifically parade morning. The committee meets at the Student Union at about 5 a.m. to get everything organized and ready to go.

“Once we get out to the staging area, it’s a little hectic, a little chaotic,” she said, “but I love that. I love the moodiness and the craziness, and it’s just a lot of fun.”

There are still several events happening this week that Robbins wants people to take part in, and for anyone interested in joining the fun of the committee for next year, applications open in the spring.