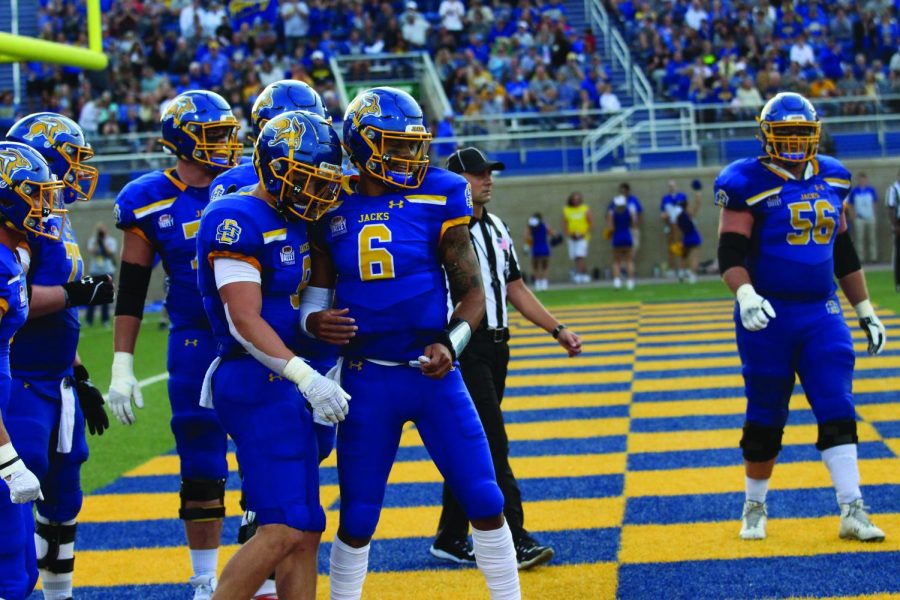 A 21-point third quarter from the South Dakota State Jackrabbits helped them pull away to a 41-17 win against Western Illinois Saturday in Macomb, Illinois.

After suffering a tough overtime loss at home to Southern Illinois, the No. 7 Jacks hoped to rebound and return to dominant form.

But the first half was closer than anticipated for the Jackrabbits. The SDSU offense would strike on their second drive in the first quarter, going 85 yards in five plays that ended with an 8-yard touchdown pass from Chris Oladokun to Jadon Janke.

Western Illinois got the ball back and fumbled, only for the Jacks to fumble the ball right back. This time, WIU wasted no time as they responded with a 2:19 scoring drive capped off with a 12-yard touchdown run from Dennis Houston.

Early in the second quarter, the Leathernecks then took a 10-7 lead with a 43-yard field goal from Mason Laramie. Later in the quarter, a Cole Frahm 47-yard field goal tied the game. After the defense forced a quick punt, Frahm hit a 23-yarder as the first half expired, and the Jacks led 13-10.

Even though SDSU had the lead, it wasn’t the usually dominating first half the Jacks have been accustomed to this season. And when the second half started, it looked to be more of the same.

On the Leathernecks’ first possession of the half, The Jackrabbit special teams came up with a big play. Kinser Madison blocked a WIU punt, and Canyon Bauer returned it nine yards for the touchdown and a 20-10 lead.

“I saw it blocked, and then it just bounced,” Bauer said. “The next thing I knew, it was in the air right next to me; I just grabbed it and kept running. It was a great play.”

With 10:02 left in the third quarter, A Myles Wanza 15-yard touchdown run for the Leathernecks cut the SDSU lead back to three.

After that, it was all Jackrabbits. The offense seemed to settle down, and the defense didn’t allow another point. On the Jacks’ next offensive drive, Pierre Strong Jr. ran for a 17-yard score. Oladokun then connected with Jaxon Janke for a 21-yard touchdown to extend SDSU’s lead to 34-17.

Early in the fourth quarter, Strong capped off the win with his second rushing touchdown of the day.

“Our offense responded well in the second half,” said coach John Stiegelmeier. “They gave us a lot of stuff, a lot of blitzes. But bottom line, we won, and we get to walk out of here and feel good about that.”

Oladokun finished 17-25 for 195 yards, two touchdowns, and a first-quarter fumble. Strong finished with 122 yards on 19 carries for his fifth 100-yard game of the season. Jaxon Janke had nine receptions for 101 yards.

On defense, Reece Winkelman had two sacks, a forced fumble, and a fumble recovery. Even without one of their best defenders Logan Backhaus, who played very little last week and not at all this week, the defense shut down the Leatherneck running game, allowing only 30 rushing yards.

The Leathernecks played the Jacks pretty even in the first half. Total yardage was barely in favor of SDSU, 164-153, and WIU had the edge in passing yards, 117-108. But the third quarter seemed to get away from them, as careless mistakes and the Jackrabbit defense settling down ended any chance of pulling the upset.

Quarterback Connor Sampson finished 29-51 for 209 yards. Tony Tate had 75 yards receiving on seven receptions. For the Leatherneck defense, Michael Lawson had a fumble recovery, and he added eight tackles.

The Jackrabbits return home for Hobo Day Oct. 23 as they take on No. 17 Northern Iowa. Next week, Western Illinois travels to Grand Forks, North Dakota, to face the University of North Dakota.