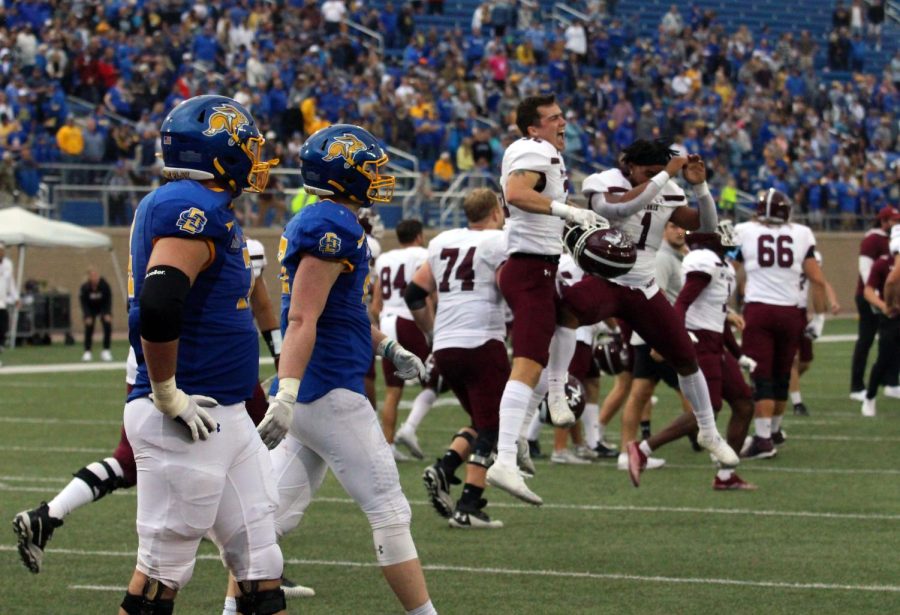 In a wild college football classic, the Jacks blew a 20-point lead, and quarterback Chris Oladokun failed to connect with Zach Heins on a two-point conversion to win the game, resulting in SDSU’s first loss of the season.

After SIU scored to begin overtime, the Jacks answered quickly, needing only two plays to reach the end zone. Offensive coordinator Jason Eck then decided to go for two and the win, but it came up short.

“I liked it,” said running back Pierre Strong Jr. on the decision to go for two. “We’re at home, you know, why not? It was unfortunate that we didn’t get it, but when you’ve got the crowd with you, why not?”

It looked like the game would turn into another Jackrabbit blowout throughout most of the first half, as SDSU built a 20-0 lead. But the Salukis would quickly get back in the game, with two touchdown drives that cut the lead to six.

In the third quarter, the Salukis appeared to have momentum on their side and converted a field goal that made it 20-17. But SIU coach Nick Hill chose to accept a Jackrabbit penalty and take the three points off the board, deciding to go for the touchdown instead.

On the next play, SIU running Back Javon Williams Jr. was upended as he tried to leap for the goal line. He fumbled the ball, and Malik Lofton returned it 97 yards for the touchdown. So instead of only being down three, the Salukis now trailed 28-14 after a successful two-point conversion from Oladokun to Heins.

“What a football game. Big plays, a lot of yards, and tough defense at times,” said SDSU coach John Stiegelmeier. “A ton of credit to SIU and coach Hill. They made some plays, and we left some points on the field… but I’m really proud of our football team.”

Throughout the game, Southern Illinois continued to show its resilience. During the start of the quarter, three touchdowns were scored in a span of 60 seconds.

The first was from SIU, a Zach Gibson touchdown catch from quarterback Nic Baker that cut the SDSU lead to 28-21. The Jacks stretched their lead back to 14 on their first play of the drive, an 85-yard touchdown run by Strong.

SIU answered with a long touchdown run of their own as Donnavan Spencer raced 63 yards to the end zone. The score was now 35-28 Jackrabbits.

The Salukis got the ball back with a chance to tie the game. They marched down the field in a little over three minutes, scoring with 34 seconds left, a 19-yard pass from Baker to Landon Lenoir. At the end of regulation, it was 35-35.

“I take a lot of time to really tell them how proud I am of them and grateful for their commitment, their resiliency, and just keeping on showing up,” said SIU coach Nick Hill. “We’ve just got a lot of big-time people on our team, and I think that shows.”

The Jacks put up 559 total yards of offense. But after going four games with no turnovers, the SDSU offense had three against the Salukis, two interceptions by Oladokun, and a first-quarter fumble by Strong.

Baker was 28-45 for 359 yards and four touchdowns on the SIU offense. He was also effective with his legs on critical downs, rushing for 46 yards. Spencer, who got all of his touches in the second half, finished with 103 yards and two touchdowns. Lenoir was their leading receiver with 147 yards on 10 receptions and two scores. SIU had 549 yards of total offense.

For SDSU (4-1, 1-1), blowing a 20-point lead will be a tough loss to get over. The loss could make it harder for the Jackrabbits to win the Missouri Valley Football Conference title and earn home-field advantage in the playoffs. For the Salukis (5-1, 3-0), winning against a top-five team on the road could help propel them to the conference title.

Up next, the Jackrabbits hope to rebound from the loss as they travel to Macomb, Illinois, to take on Western Illinois Oct. 16 at 12 p.m. The Salukis will take on North Dakota for their homecoming game next week at Saluki Stadium.