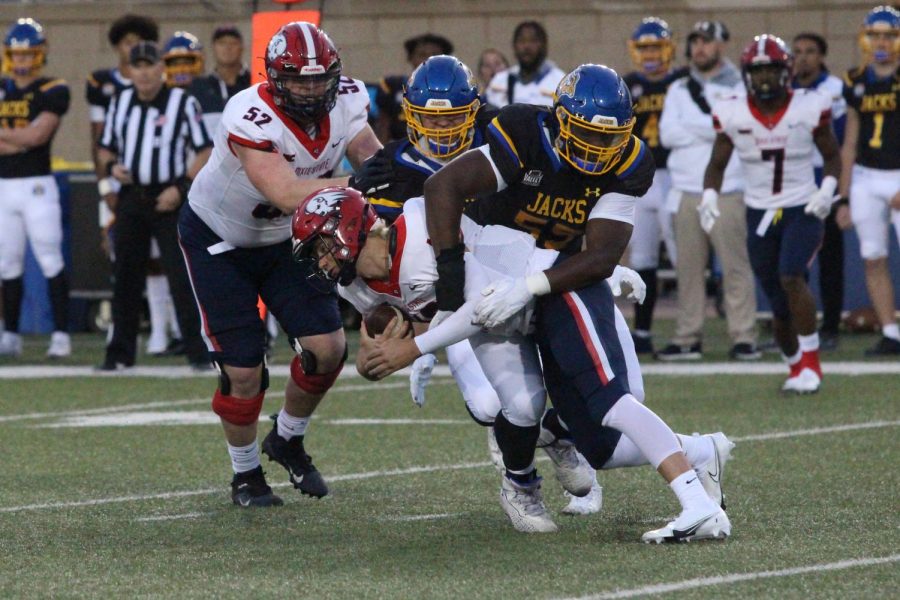 In the 54th annual Beef Bowl in front of 14,473 fans, The Jackrabbits, ranked No. 3 in the FCS coaches poll, overcame a sluggish start offensively to wrap up their final non-conference game of the season.

The first half proved to be a tale of two quarters. The Jacks were scoreless in the first quarter, with the passing game not yet finding any rhythm and the rushing attack not faring much better. They would gain a net total of two yards in their first 15 plays and were even in negative yardage through their first four drives.

Once the second quarter began, so did the scoring explosion. A Pierre Strong Jr. 21-yard touchdown run got it started, followed by an 11-yard touchdown pass from Chris Oladokun to Mike Morgan on the team’s next drive. Less than a minute later, Dalys Beanum intercepted a pass from Dixie State’s Kenyon Oblad and returned it 36 yards to the end zone. Just like that, it was 21-0.

But the Jacks were far from finished. A three-yard touchdown run by Strong, then a Zach Heins four-yard touchdown reception made the halftime score 35-0. SDSU had over 200 yards of offense in the second quarter alone.

And what a day it proved to be for Morgan, who not only caught the first two touchdowns of his college career but was also celebrating his 22nd birthday.

Morgan also mentioned how the team’s black jerseys might have contributed to SDSU’s slow start offensively.

“There’s always a saying around here that our black jerseys are kind of like bad juju,” he said. “So, a lot of people have blamed it on that.”

Despite not completing his first eight pass attempts, Oladokun finished 8-18 for 110 yards and two touchdowns. Heide finished 4-5 for 94 yards and a touchdown. Strong rushed for 88 yards on 15 carries and two scores.

Defensively, the Jackrabbits dominated from the start, allowing only six rushing yards, forcing four sacks, and having four interceptions.

SDSU’s secondary was especially impressive, considering that All-American cornerback Don Gardner didn’t play due to breaking his arm last week against Indiana State. He is expected to be out eight weeks.

“The next man was up, and we took the challenge,” said cornerback DyShawn Gales. “We tried to play for (Gardner), and we came out pretty well.”

SDSU’s first-quarter struggles could’ve been an opportunity for Dixie State to steal some early momentum on the road against a top-five team, but they could not capitalize, as numerous mistakes and turnovers killed any scoring chances they might have had.

Up next for the Jackrabbits is their biggest test this season, as No. 7 Southern Illinois, a team SDSU beat twice last season, comes to Dykhouse Stadium Oct. 9 at 2 p.m. For the Trailblazers, they travel to fourth-ranked Montana next week.