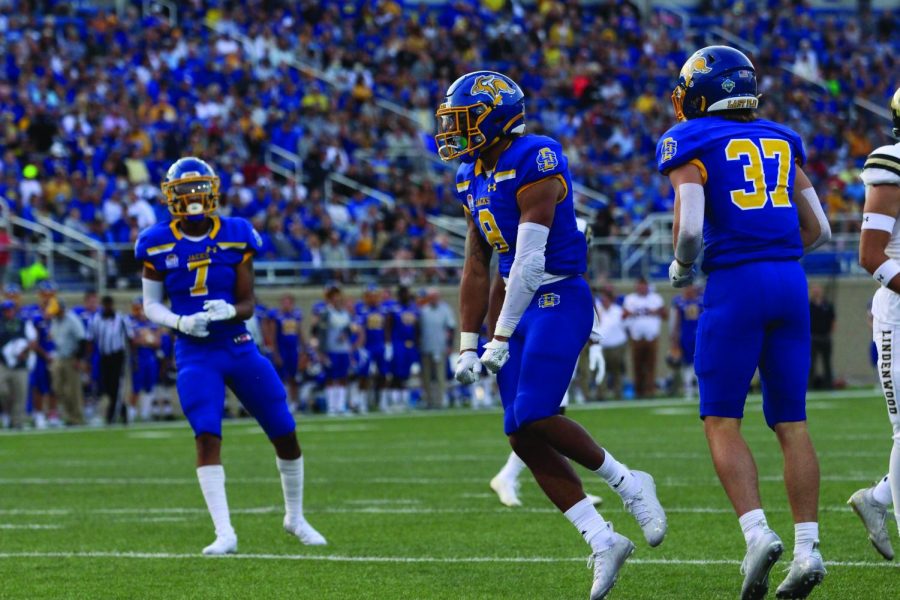 The South Dakota State Jackrabbits’ impressive start to this season continues as they shut out Indiana State 44-0 Saturday in Terra Haute, Indiana.

Coming off their improvement week, the No. 2 Jackrabbits did not miss a beat, opening their Missouri Valley Football Conference schedule with their first shutout of the season.

SDSU got the scoring started right away on their first possession, going 65 yards in five plays. The drive ended with a trick play that caught the Sycamores off guard, a Pierre Strong Jr. touchdown pass to quarterback Chris Oladokun.

That first drive set the tone for how the rest of the game would go. After the Jacks’ next two offensive possessions ended with a punt and a blocked field goal, an Adam Bock interception gave the ball back to SDSU. And they wasted no time as Oladokun connected with receiver Jadon Janke for a 33-yard touchdown on the drive’s first play.

Big play touchdowns were prevalent throughout the first half. In the second quarter, Oladokun hit Tucker Kraft and Jaxon Janke for scores of 26 and 42 yards, respectively. By halftime, the score was 34-0, and the game had essentially been decided.

The Jacks offense would total 517 yards. Oladokun finished with 216 passing yards on 12-21, three passing touchdowns, and a receiving touchdown. Strong, having to carry more of the load with Isaiah Davis injured, ran for 150 yards on 20 carries. Freshman Amar Johnson added a touchdown late in the fourth quarter.

Overall, SDSU’s offense spread the ball around and had production from just about everybody. Kraft was the team’s receiving leader with 85 yards and a touchdown on five receptions.

By the third quarter, the Jackrabbit starters had left the game.

Backing up the explosive offensive production was the Jackrabbit defense, who posted an impressive shutout. Leaders in tackles included Bock with 10, Logan Backhaus with eight, and Malik Lofton with five.

The SDSU defense allowed 226 yards of total offense, including only 78 rushing yards, and had three sacks.

For Indiana State, they had a couple of early chances to score but could not capitalize. But it was a tough afternoon for the Sycamores, who beat Eastern Kentucky last week with a dramatic last-second touchdown pass from quarterback Kurt Wilderman.

Wilderman could not replicate that same magic against SDSU. He finished 9 of 22 for 89 yards and an interception. Running back Pet Kerlegrand ran for 76 yards on 21 attempts. He was also the Sycamores’ leading receiver with 50 yards on two catches.

Michael Thomas led the Indiana State defense with 10 tackles. Johnathan Edwards and Ethan Hoover were second with five each.

The Sycamores look to rebound from the loss when they to Vermillion to take on South Dakota Oct. 2. The Jackrabbits return to Dana J. Dykhouse to play Dixie State next Saturday.