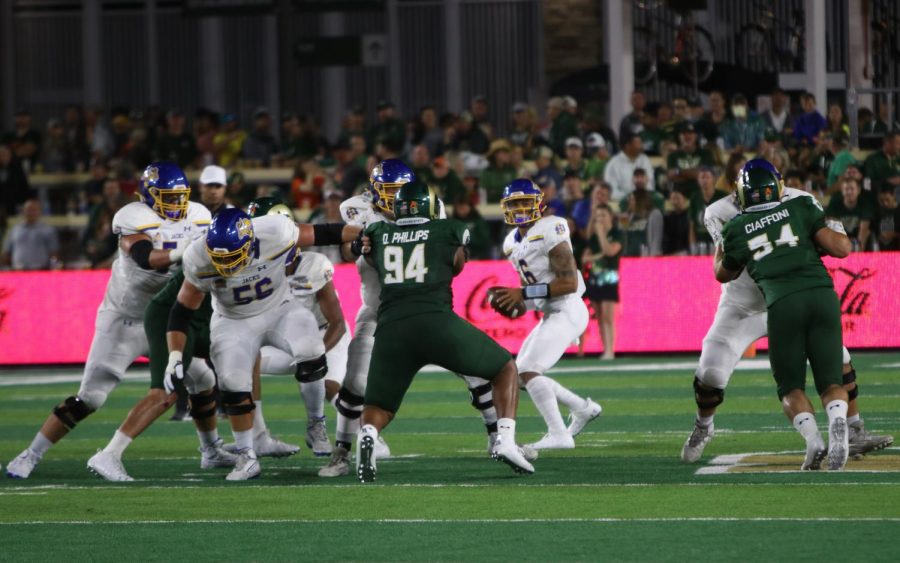 The South Dakota State Jackrabbits opened their football season Friday with a 42-23 rout of Colorado State at Canvas Stadium in Fort Collins, Colorado.

SDSU looked dominant from the start, earning their second ever win against a Football Bowl Subdivision opponent. The Jacks are now 2-9 all-time against FBS schools, with the other win coming in 2015 when they beat Kansas 41-38.

The Jacks, ranked third in the Football Championship Subdivision, entered the game as two-point underdogs, and few predicted that they would win. But Jackrabbit players and fans alike didn’t feel like this was an upset.

“Just taking the field and saying we belong,” said coach John Stiegelmeier. “Nothing against Colorado State, but we’re a good football team. We played good football, and I was really proud of how we took the field and how we played.”

The Jackrabbits struck first late in the first quarter with a 48-yard touchdown run by Pierre Strong Jr. CSU would respond on their next drive, going 75 yards in 17 plays that ended with a David Bailey touchdown. After that, the Jacks would outscore Colorado State 35-16.

Overall, the Rams had few answers for the Jackrabbits, who finished with 466 yards of total offense. Strong rushed for 138 yards and two touchdowns. Receiver Jadon Janke would score two touchdowns on six receptions for 92 yards. His brother Jaxon had three catches for 58 yards, and tight end Tucker Kraft added five receptions for 53 yards.

But the player leading it all was quarterback Chris Oladokun, who was making his Jackrabbit debut and celebrated his 24th birthday on Friday.

“To come out here vs. an FBS opponent, the stadium was rocking,” Oladokun said. “Before we came out, I was like ‘by the end, they’re going to be quiet, and that stadium’s going to be a lot less full than it was,’ and we took care of business.”

And what a birthday it was for the sixth-year senior transfer, who threw for 228 yards and two touchdowns on 18-28 passing.

Once the Jackrabbit offense got going, the defense backed it up, forcing two turnovers and allowing less than 80 rushing yards before reserves came in late when the game was out of reach.

“The defensive line is always going to come out and be themselves,” said defensive tackle Xavier Ward, who had five tackles. “That’s one thing we’re known for is stopping the run, and I think we do a good job at doing that.”

For the CSU defense, they came in with one of the best defensive lines in the FBS. Despite that, SDSU’s offensive line helped pave the way for 242 total rushing yards and didn’t allow a sack.

“Those are my guys,” Oladokun said of SDSU’s offensive line. “They kept me clean, and they promised for the birthday no sacks; it was a great job by them.”

Offensively, CSU struggled to run the ball effectively, totaling 124 yards on the ground. Quarterback Todd Centeio finished 29-42 for 304 yards and a touchdown. Trey McBride led the team in receiving with 13 catches for 116 yards, while Dante Wright added 103 yards on three receptions.

Next up for the Jackrabbits is their home opener against Lindenwood on Saturday, September 11 at 6 p.m. For Colorado State, their next opponent will be Vanderbilt at home on Saturday.

“I think we took the field and had great confidence, and we should; we have a good football team,” Stiegelmeier said. “I think at times we played really well. But I know this, and they know this:  We can play a lot better.”