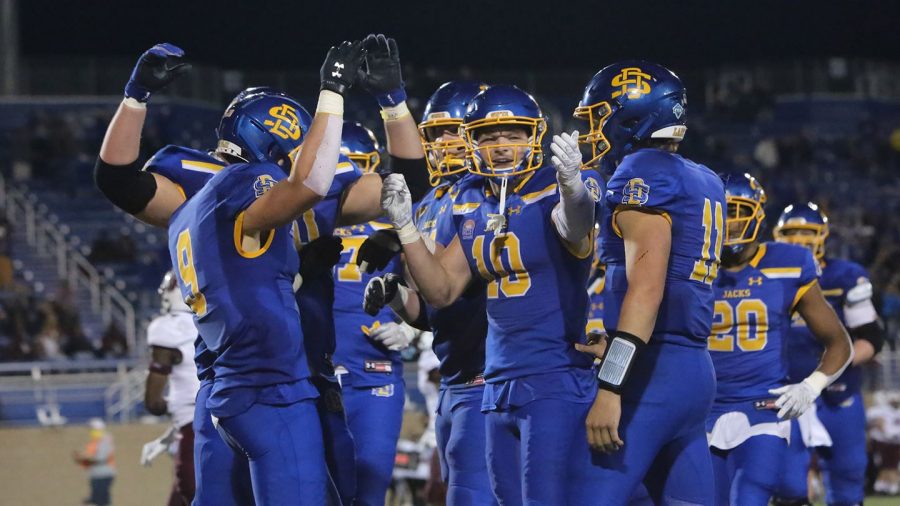 Coming off its first-ever national title game appearance, expectations are high for the South Dakota State Jackrabbits as they prepare for their Friday, Sep. 3 season debut against Colorado State.

Since they played a conference only schedule last spring, this will mark the Jackrabbits’ first game against a Football Bowl Subdivision opponent since they lost to Minnesota in 2019.

Senior linebacker and captain Logan Backhaus said that the players always look forward to FBS matchups because it gives them the chance to show how good they are.

“It gives us this level of opportunity to show everyone in the nation how good FCS football is and put a little respect on our name, hopefully,” Backhaus said.

With many of last season’s offensive production coming from underclassmen, the Jackrabbits, ranked No. 3 in the FCS STATS preseason poll, return most of their key starters on offense, including sophomore running back Isaiah Davis. He hopes to form a great one-two punch with all-American Pierre Strong Jr.

“Whatever role I get this year, me and [Pierre] will be great,” Davis said. “But whatever the role, I’m just going to try and do my best to pursue that role, be a starter, and hopefully we can be a one-two punch.”

But one big difference to this year’s roster is the addition of transfer quarterback Chris Oladokun, a sixth-year senior from Tampa, Florida. Before arriving at SDSU earlier this summer, Oladokun began his college career at South Florida before transferring to Samford, where he started nine games in two seasons.

With last year’s starter Mark Gronowski done for the season due to a leg injury, Oladokun will be coach John Stiegelmeier’s QB1 against Colorado State. Keaton Heide will be the backup.

“Chris has done a really good job,” Stiegelmeier said. “First of all, fitting in, which was important, learning the offense, which is important, and then executing the offense. Guys respect him, they believe in him, and he’s doing a good job.”

“I think it’s gonna help us play a lot faster this year,” Backhaus said. “Kind of like what we did last year, we’re not the biggest defense. The linebackers aren’t the biggest guys, but we’re fast at every position.”

Meanwhile, Colorado State hopes to rebound from a rocky 2020 season, starting 1-3 before the Mountain West Conference suspended the rest of its football season due to COVID-19.

Stiegelmeier knows that winning against FBS teams isn’t easy, and the Rams will be tough to beat.

“Their quarterback is more of a drop-back guy, and they’ve got good running backs,” Stiegelmeier said. “I would say their skill on offense would be something we’d be concerned about.”

Kickoff is at 8 p.m. at Canvas Stadium in Fort Collins, Colorado. Live television coverage will be available on Fox Sports 1.