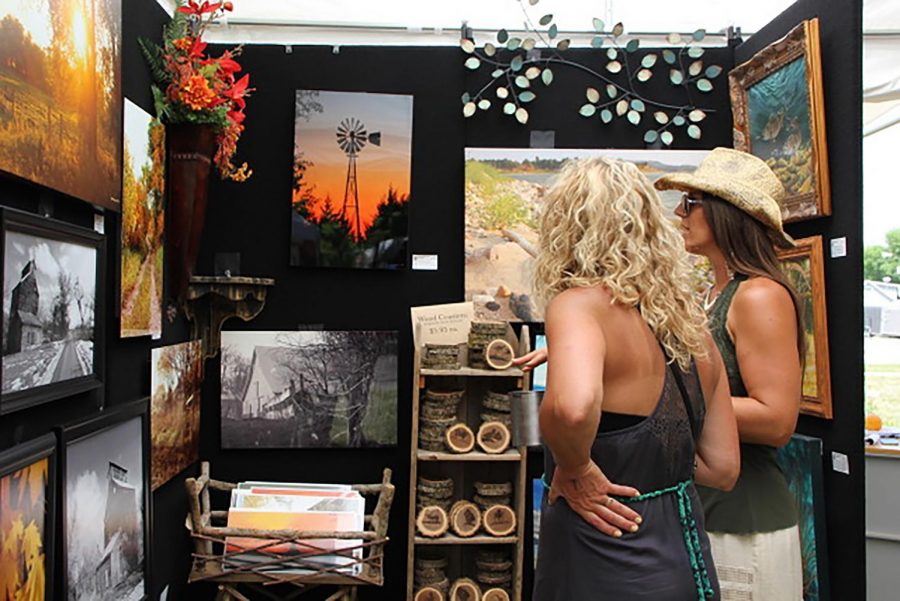 This summer marks the 50th annual Brookings Summer Arts Festival (BSAF), an event that features live entertainment, food vendors and artists from across the country.

The 2021 BSAF will be held July 10-11 and is located throughout Pioneer Park in Brookings. Though this year’s vendors and entertainment have not yet been finalized, BSAF Publicity Chair Shari Avery says most of BSAF’s staple attractions will be returning this summer.

“There’s visual art, and the food art and the performing art, so you can label it however you want to put it, but there’s just some really neat things that happen,” she said.

There are also various local and regional food trucks and stands spread throughout the park.

“We have everything from South Dakota pork sandwiches to some crazy Cajun stuff from Florida,” she said.

No festival was held last summer because of COVID-19, but Avery said the event was still commemorated as the 49th year of the festival.

“We acknowledged our 49th with some commemorative pictures and things like that, cause we kind of wanted to stay on track,” she said.

This year, Avery anticipates fewer artists and vendors than in a normal year, as some are either from states with stricter travel restrictions or are older individuals who are more susceptible to the virus.

She also said they will be encouraging guests and vendors to follow city and CDC guidelines during the festival.

BSAF first began in 1972 after Time Magazine interviewed a newly established Northwestern Energy on why they chose to settle in Brookings. According to Avery, one reason the company gave was the art culture in Brookings—which was not exactly true at the time.

“They created this story in this magazine, and it was sort of not exactly all there yet, so these people said, ‘well we’ve got to make this all happen,’” Avery said, “so … a group of people got together and said, ‘we are going to establish this festival.’ So, we always credit a gas company here in Brookings of giving the push to get something started.”

The original festival hosted even more events, including a 4-H Horse Show, parade, a high school band concert and street dance. There were also only 15 art booths at the first festival.

Since then, the process to participate as an artist has become much more disciplined, with the festival now being juried. Committee members judge each artist’s work based on a list of criteria, according to Avery.

“We require what they bring to be original artwork or skilled craftwork,” she said. “We require that the artist is present.”

Dave Huebner, BSAF’s living history chair and owner of Dakota Stoneware Pottery in Bushnell, South Dakota, has been to every BSAF since the event’s founding, which he helped to jump start.

“I was an art student in the mid-1960s,” he said. “At that time, I decided I wanted to make a living as an independent artist creating art to sell.”

He has continued to participate in BSAF because of the opportunity it provides to showcase his pottery.

“The festival is a chance for regional artists to show off and market their work,” Huebner said. “Each piece of art I make is (a) one of a kind item, and like selling a piece of me. I like to know who is buying my art and … will appreciate the work I put into it.”

Avery also enjoys seeing the different creations of the artists at the festival and said one of her favorite things about the event is how it brings people together, and to Brookings.

“Wherever you walk in the park you can hear music of some kind, and you can hear people laughing,” she said. “On the other (hand), it’s such a great chance to showcase Brookings.”

For South Dakota State University students looking to get involved, Huebner said the festival serves as a great way to get others to see your work.

“Most of my classmates at SDSU started their art career doing small art shows in Brookings while [they were] students,” he said. “The exposure helped guide their future and show them art was a

viable career.”Avery also added that the festival is always looking for volunteers to help set up the fes-tival and keep everything moving smoothly.“If there’s someone out there who would like to volunteer in any form, we do things like, Thursday night we’re staking the park,” she said. “We usu-ally have some need for a couple extra hands, and again with COVID, some of the people who would normally volunteer are a little leery yet in April.”Volunteers can contact BSAF through the gen-eral info email or phone number on the website or through the event’s Facebook page.For more informa-tion about BSAF and for updates about this year’s festival lineup, details can be found at BSAF.com.