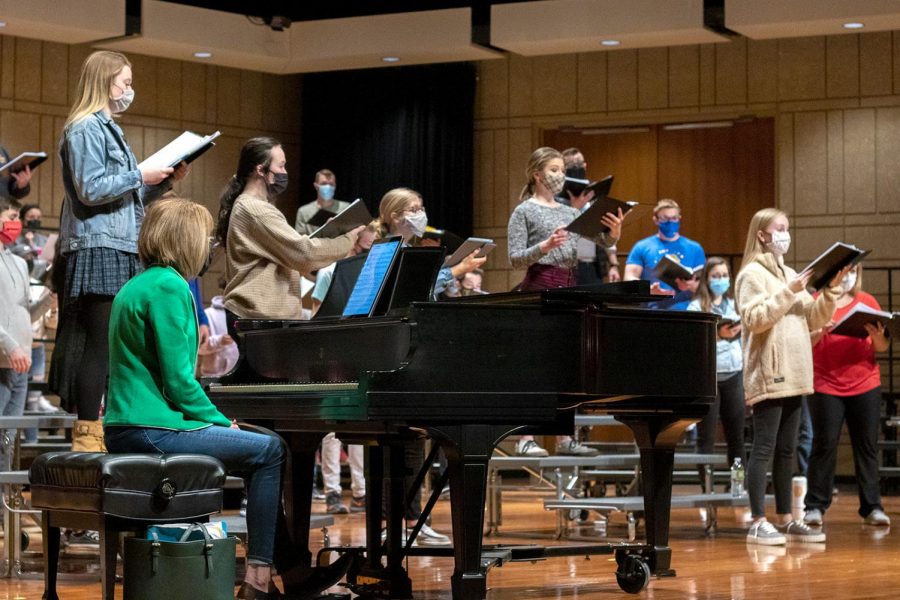 Every show taking place this weekend will be free of charge to the audience. This is a break from the tradition of previous years.

“There is no cost for any of the tickets this year,” Laura Diddle, director of choral activities, said. “The music department has not charged for any of its presentations this year. They have all been free and open to the public. We just have a hard time justifying charging during this time.”

This weekend will mark the first live performances of the entire year for Statesmen, Choralia and the opera. Diddle spoke of her students’ and her own excitement for their showcase.

“It truly is that South Dakota spirit, they just weren’t going to let anything hold them back,” she said. “These students were determined that they were going to perform live, and if we have an auditorium of a thousand seats and they say you can have 120 seats, we say that’s fine.”

The different groups performing this weekend have prepared a variety of pieces for the public. The women’s choral group, Choralia, will perform a piece called “Music in my Mother’s House” composed by J. David Moore, which will serve as an homage to the students’ mothers.

The Wind Symphony will be performing more of their classic repertoire this weekend.

“A lot of times, I try to mix things up to try to create more of a sensation of variety in terms of balancing new music with old music,” Jacob Wallace, conductor of the Wind Symphony, said. “But for me, the main priority of this concert, seeing as we haven’t performed all together all year, was for the students to have fun.”

The concert band’s performance will feel closer to normal this year as they play one significant piece all together as one band, titled “The South Dakota State College March,” composed nearly 80 years ago by Karl King, who wrote the piece for then-Director  of Bands, Carl Christiansen.

“I thought that was a really appropriate way to bring those two bands back together and to end with that mark,” Kevin Kessler, director of the concert band and chamber music, said.

The scheduling for this year’s festival will also look different compared to past years. While in previous years one ticket was purchased for the entire festival and all of its concerts, this year, a separate ticket will be delegated for each event.

This change in traditional scheduling is mostly due to COVID-19 restrictions prohibiting a full auditorium, the idea being that giving out tickets to specific events will increase parents’ and families’ abilities to see their relatives perform individually this year, without having access to the entire show and possibly restricting others’ access to their family members’ performances.

Tickets are given to the performing students first. Students who do not know a performer and wish to attend this weekend’s events are encouraged to call the Performing Arts Center and ask about available tickets.

Those who are unable to attend in person are encouraged to tune in on Facebook Live where the concerts will be professionally livestreamed.

The festival will ultimately serve as a grand showcase of everything the music department has been working up to this year and a display of the department’s endurance through COVID-19.

“This event serves as the culmination of a year’s worth of musical development and growth,” David Reynolds, director of the School of Performing Arts, said. “Each of these ensembles will be at their peak during the festival. It is always enjoyable to hear all of these polished performances over the course of the three days.”