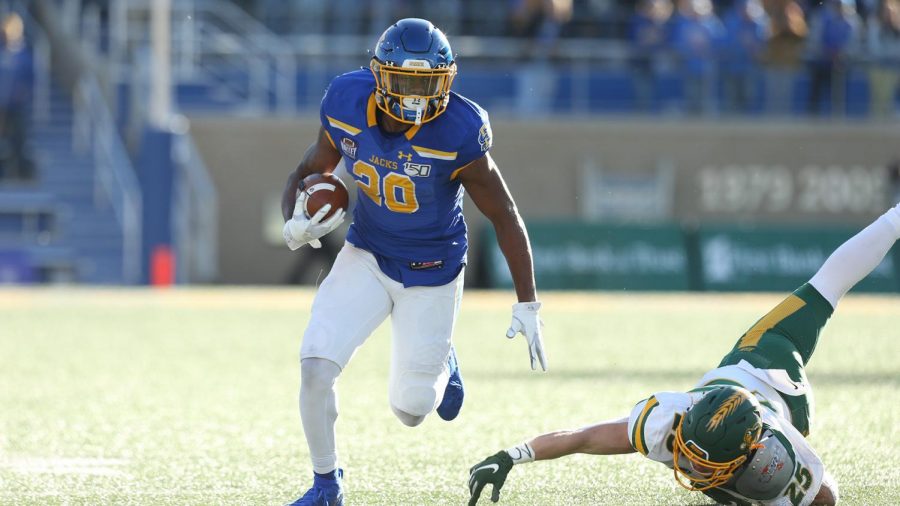 A share of the Missouri Valley Football Conference title and the Dakota Marker is at stake this weekend as South Dakota State heads to Fargo to take on North Dakota State.

The game was initially set to take place April 3, but was postponed because of a positive COVID-19 test in the Bison program.

The No. 4 Jackrabbits (4-1) are heading into this game after a three-week break, with last week’s game against USD being canceled because of the Coyotes’ pandemic issues. The second-ranked Bison (6-1) got back on the field last Saturday against Northern Iowa.

Over the extended time away from the field, the Jacks are now well-rested and healthy, but coach John Stiegelmeier is concerned about rust.

“Not having tackled, not having blocked live a whole lot, those things that are fundamentals in the game,” Stiegelmeier said. “I think the mental part of the game we’re fine with because we’ve had so much time, and we’re healthier than we’ve ever been.”

Stiegelmeier mentioned that the break also gave his team a chance to further prepare for the Bisons.

“We’ve always called a bye week an improvement week,” Stiegelmeier said. “Don’t go out to practice just to practice. Have a mission for every day and explain that to the players, so they see it develop during practice.”

For the third-ranked offense in the Missouri Valley, SDSU will rely on true freshman quarterback Mark Gronowski to get the Jacks past NDSU’s defense, ranked second in the Valley

For Gronowski, this will be the most significant start of his young college career to date.

“Bottom line is he’ll have some nerves,” Stiegelmeier said. “I’ll be nervous. Hopefully, we’re not too nervous to make the right decisions and make the right plays.”

Running back Pierre Strong Jr. will also start. In the Jackrabbit’s last game against Western Illinois, Strong didn’t suit up because of an injury.

Defensively, the Jackrabbits head into the game with the third best scoring defense in the conference, allowing 15.6 points per game.

Stiegelmeier understands the importance of this game and everything that is at stake, but he’s excited about his team, and he’s ready to get back on the field.

“Our players know how big this game is. It’s a conference championship, it’s the marker trophy, an automatic qualifier, and it’s a higher seed,” Stiegelmeier said. “I think if one of the teams wins handily, they have a chance  to potentially be the No. 1 seed in America.”

The game is set to kick off Saturday at 2:30 p.m. in the Fargodome.