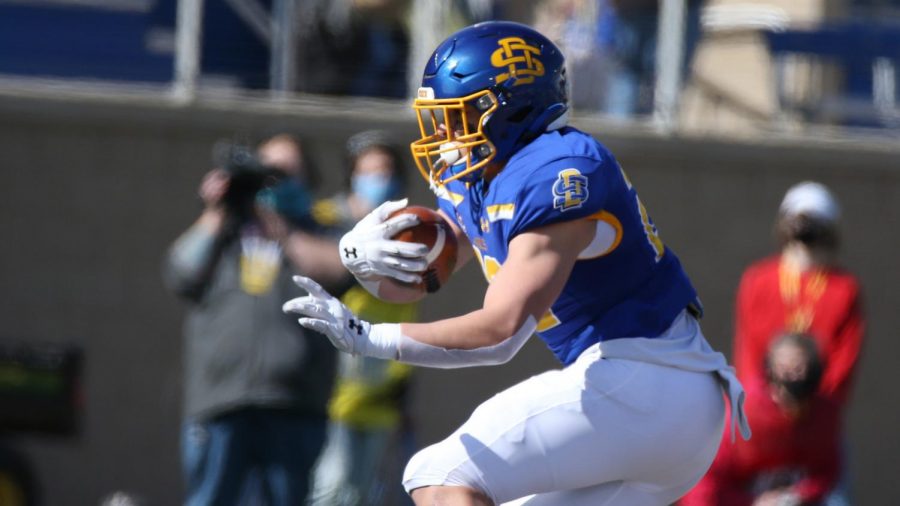 In a highly anticipated top 10 matchup, the 6th ranked South Dakota State Jackrabbits put together a complete performance, blowing out No. 5 Southern Illinois 44-3 on Saturday at Saluki Stadium in Carbondale, Illinois.

SDSU ran for 394 yards on SIU’s defense, and they did it without All-American running back Pierre Strong Jr., who did not play due to an injury he suffered in last week’s win against Youngstown State.

Freshman Isaiah Davis started in his place and did not disappoint, rushing for 150 yards on 22 carries and three touchdowns.

“I’ve been pushing myself, and we all push each other to be the best,” Davis said. “That’s really helped me and prepared me for a time like today– getting the start.”

The running game was aided by quarterback Mark Gronowski’s 103 rushing yards and two touchdowns and Jordan Meachum’s 88 yards on 13 carries.

The Jackrabbit offense was consistent all day, jumping out to a 17-3 halftime lead. But they would blow it wide open in the third quarter, scoring on every offensive possession before benching starters in the fourth quarter.

On defense, SDSU posted its most dominant performance of the season, shutting out SIU’s dynamic offense over the final three quarters after trailing 3-0. They allowed only 213 yards of total offense and forced three turnovers—interceptions from Joshua Manchigiah, Don Gardner and Logan Backhaus.

“It was good to come out and really just make a statement coming out from halftime,” said defensive end Tolu Ogunrinde. “Because I feel like that’s the first time we really came out and made a statement.”

Ogunrinde added that SIU’s offensive gameplan wasn’t the main concern for the Jacks defense. They were more focused on executing their own defensive gameplan.

But it wasn’t their day on Saturday, as they were not able to get anything going offensively. SIU was held to under 100 yards passing and threw three interceptions, two by Kare Lyles and one by Stone Labanowitz.

The Salukis’ two leading rushers this season, Romier Elliott and Javon Williams Jr., were held in check all afternoon. Elliott totaled 22 yards on 10 carries, and Williams ran for 49 yards.

At times this season, the Jackrabbits have made crucial mistakes that could’ve cost them in games. Last week, coach John Stiegelmeier said he couldn’t wait for his team to put together a complete performance, and the team responded.

With next week’s home game against Illinois State canceled, the Jackrabbits (4-1) now look ahead to their Saturday, April 3 showdown with North Dakota State in Fargo. The Salukis (4-2)  will be on the road to face Missouri State next weekend.