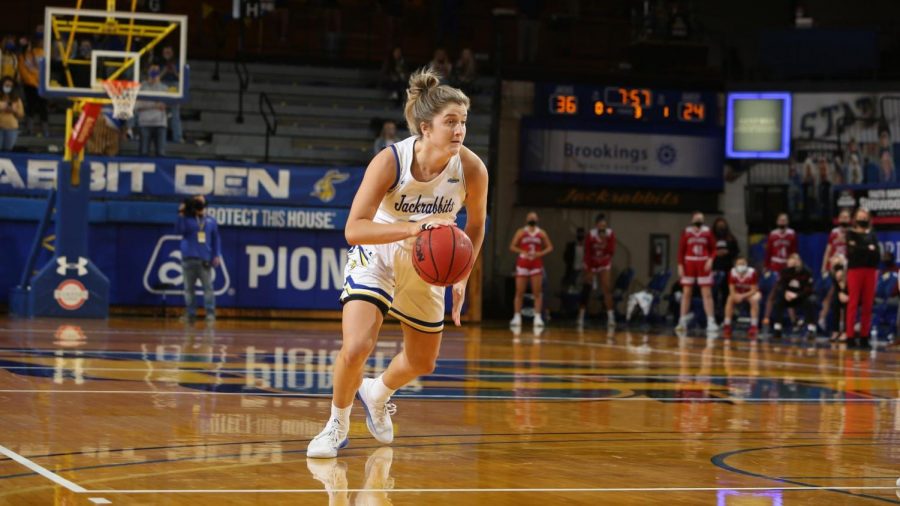 Paiton Burkhard’s 15 second-half points were not enough as the No. 9 seed SDSU (21-4) women’s basketball fell to No. 8 Syracuse (15-8) Sunday night in the NCAA Tournament.

The Orange got their revenge from their 2019 second-round loss to the Jackrabbits which propelled them to their first Sweet 16 appearance in school history.

The Jacks were only down by two points heading into the fourth quarter. However, they were outscored 22-7 in the final period of the game.

“I think defensively we made it hard for them and they just had a better fourth quarter,” said head coach Aaron Johnston after the loss. “The fourth quarter we didn’t generate enough offense. We made some mistakes and they capitalized on that.”

The Orange definitely had a huge inside presence that the Jacks are not typically accustomed to seeing in the regular season. Syracuse had 14 blocks in the game, only two off from an NCAA Tournament record.

“Anytime you get a chance to play on these stages, it feels like a whole new ball game compared to what we’ve done throughout the year,” Johnston said. “The only way you can be more prepared for the next opportunity is to get through it.”

The Jacks also committed twice as many turnovers with 22 compared to Syracuse’s 11.

“Between turnovers and blocked shots, there’s just too many empty possessions,” said Johnston. “When we weren’t making three’s that allowed them to continue to just stay home around the rim. In the second half, we weren’t quite as sharp.

Burkhard was one of the few bright spots on the team capping off her junior season with 17 points. She was in foul trouble in the first half. She is happy with how hard her team fought all season through adversity.

“I think that the what-if is definitely a thought in the back in all of our heads,” said Burkhard of the impact injuries had on their season. “But I’m not gonna dwell on it because we played well with Myah but played well without her too.”

Tori Nelson added 11 points for the Jacks while Tylee Irwin struggled, only scoring three points on 1-for-8 shooting from the field. Emily Engster had a double-double for the Orange with 18 points and 12 rebounds. Kiara Lewis chipped in 14 and Tiana Mangakahia had 11.

Syracuse moves on to play UConn on Tuesday, while South Dakota State looks ahead to the offseason and hopes to run it back with many players returning because of the NCAA giving all players an extra year of eligibility.

“Off-seasons are always different,” said Johnston. “We’ll see how this plays out and will have to play very well to have a good year. I try not to overvalue the roster strength, because even if we were at full strength today, that doesn’t mean we would’ve been guaranteed a win.”