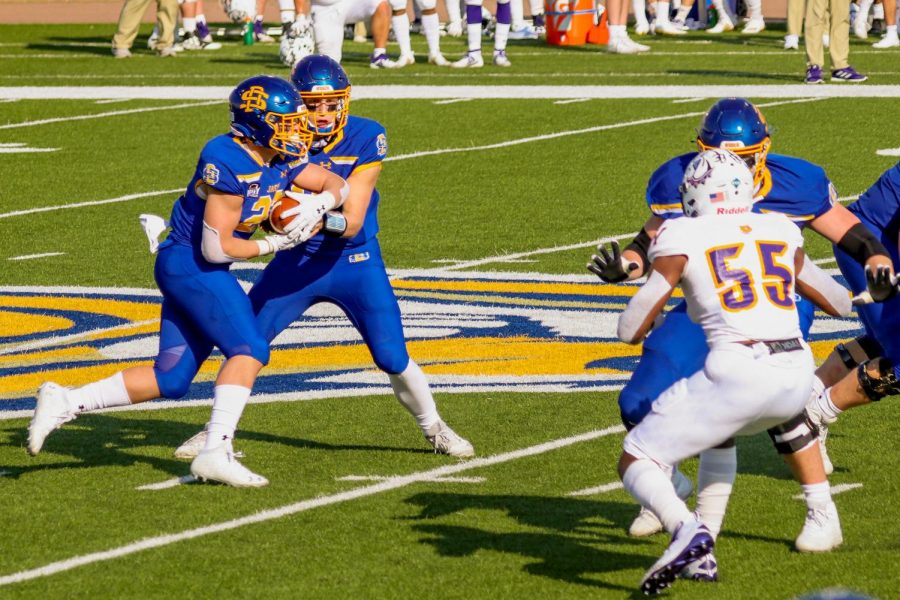 After struggling over the past couple of weeks, the No. 8 Jackrabbits responded with their best performance of the season. Coach John Stiegelmeier credited the increasing confidence of his football team.

“The goal is to get better every week,” Stiegelmeier said. “Sometimes two or three plays gives you the confidence to play better in the game, and I think we had some plays early that did that.”

The Leathernecks struggled offensively with turnovers and were unable to finish drives in the red zone.

Quarterback Connor Sampson completed 29-48 for 278 yards, a touchdown and three interceptions. Dallas Daniels led in receiving with six catches for 111 yards and caught the team’s only touchdown.

As great as SDSU’s offense was, the defense was just as good, forcing three turnovers and allowing less than 100 rushing yards.

“Being successful in the red zone and allowing 10 points or less, those are our standards,” said Joshua Manchigiah, who intercepted Sampson in the game. “We just wanted to emphasize those more throughout the week, and we were able to do that today.”

Both Gronowski and Manchigiah mentioned how last week’s loss to North Dakota left a bad taste in their mouth, and they used it as motivation heading into this game.

“We wanted to play with a chip on our shoulder and play a complete game,” Manchigiah said. “Still work to do, but I think we put our best game together so far this season.”

“I’m just excited to play football,” Stiegelmeier said. “I know this is our third game, but it’s still a treat to be a part of this game and a part of this football family.”