Jacks close out regular season with win over Roos 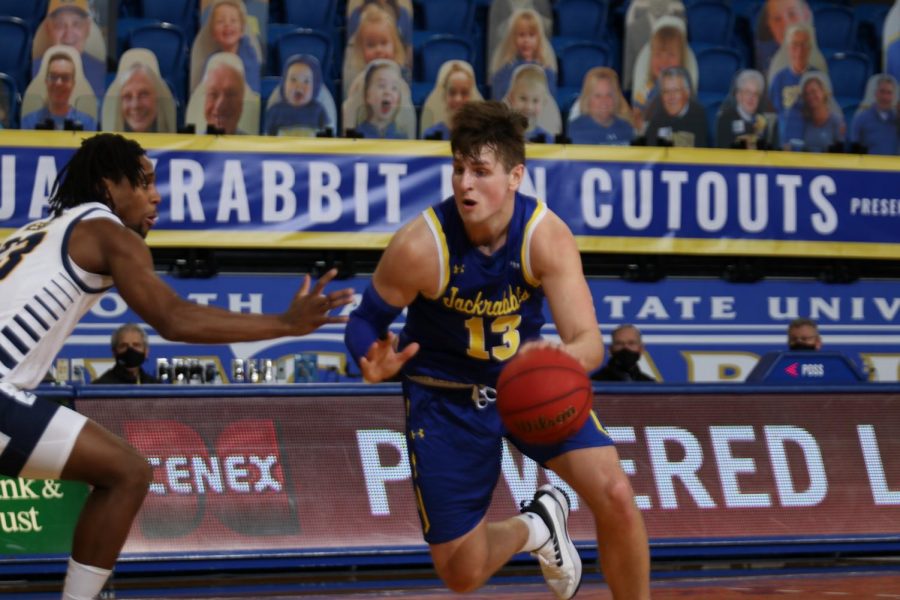 The South Dakota State men’s basketball team set a school record for field goal percentage at 73.5% in an 89-77 win over Kansas City in their final regular season game of the season.

The Jackrabbits guaranteed themselves a top-two seed heading into the Summit League Tournament at the Sanford Pentagon in Sioux, Falls, SD next weekend.

The leading scorer for Kansas City, Brandon McKissic was not suited up to play tonight, so the Roos had to find other ways to score.

“He’s a very dynamic guard that has the ability to make shots from all over the floor,” SDSU coach Eric Henderson said of McKissic. “They played completely different tonight though. It was certainly a different team that we guarded tonight than last night.

The Jacks only missed nine shots the entire game and 23 overall on the weekend. The Roos’ perimeter defense meant fewer 3-point attempts and more points inside the paint.

“I think it says that we know what we’re good at,” Baylor Scheierman said postgame. “Obviously we’re one of the top three-point shooting teams. But with the way Kansas City plays, they really took it away. Only missing 23 shots in two games is pretty crazy.”

Coach Henderson thought previous matchups where shot selections were an issue really helped the team out.

“I think we learned from some of those past games,” Henderson said. “When you get into situations that are tough, sometimes you just have to take what the opponent is giving you.”

The Roos had three players foul out of the game and two others nearly did finishing the game with four fouls. The team as a whole committed 30 team fouls in the entire game causing the Jackrabbits to shoot 42 free throw attempts.

Douglas Wilson had a game-high 20 points, while Luke Appel had his best weekend of the season by scoring 17 points last night and 18 tonight. Scheierman and Matt Dentlinger chipped in 16 points each.

Scheierman thinks it would be a cool accomplishment to achieve but ultimately is focused on the upcoming tournament.