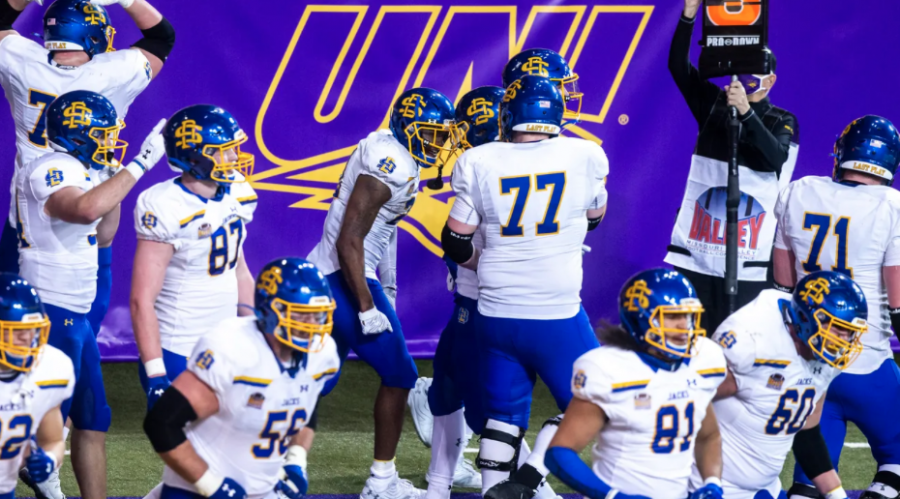 The South Dakota State Jackrabbits opened their football season in Cedar Falls, Iowa, on Friday with a dramatic 24-20 win against Northern Iowa.

After trailing 17-7 at halftime, the No. 3 Panthers stormed back to take the lead late in the fourth quarter, but the No. 5 Jackrabbits drove down the field and capped off a game-winning drive with a Mark Gronowski touchdown pass to Pierre Strong Jr. with 19 seconds left.

The star of the game was the true freshman quarterback Gronowski who showed a lot of poise in his college football debut.

“You’re talking about a true freshman on the road, in a really good conference, against a really good opponent,” coach John Stiegelmeier said of Gronowski. “So I think that says a lot about Mark Gronowski.”

Gronowski was named the starter, with J’Bore Gibbs and backup Keaton Heide being sidelined due to injury. He would finish with 194 passing yards, two passing touchdowns and a rushing touchdown.

Gronowski mentioned how important it was for him that the offense started well in the first half.

“We were able to build confidence early,” Gronowski said. “We were making some great plays at the beginning of the game.”

Junior running back Pierre Strong Jr. led the team in rushing with 22 carries for 96 yards, adding another 31 receiving and catching the game-winning touchdown.

Strong talked about what was said leading into the Jackrabbits’ final drive.

“Everybody kept telling me I’m the number one running back in the nation for a reason,” Strong said. “I was just telling myself I’ve got to make a play.”

Tight end Zach Heins led the team in receiving, catching five passes for 90 yards, including a 43-yard reception that set up the winning touchdown.

For the Panthers offensively, sophomore quarterback Will McElvain threw for 164 yards, a passing and a rushing touchdown. Junior Quan Hampton led UNI in receiving with seven catches for 90 yards, while freshman Tysen Kershaw caught a touchdown pass.

Defense and special teams came up big for the Jackrabbits, with the defense holding UNI to only 28 yards rushing and the special teams blocking a punt in the second quarter that set up a touchdown.

Senior linebacker Logan Backhaus led the way with five tackles, including two tackles for loss. Backhaus praised his defense for how well they played.

“Our D-line was getting after the quarterback,” Backhaus said. “Really, I don’t think their offense could do a whole lot against us.”

Defensively for the Panthers, Junior Korby Sander led with 13 total tackles. Senior Jared Brinkman was also a key contributor with five tackles and a sack.

The last time SDSU played a football game was over a year ago when they lost at home in the playoffs to UNI.

Stiegelmeier said the loss wasn’t a motivating factor for getting his players ready for the game.

“They walked in the locker room and saw the score every day if they wanted to, but we brought it up one time,” Stiegelmeier said. “I preach to play in the present. I like to look at how we are as a football team and how we can get better day by day.”

Both teams will be on the road next week. The Jackrabbits will face off against North Dakota Feb. 27, and the Panthers play at Youngstown State.