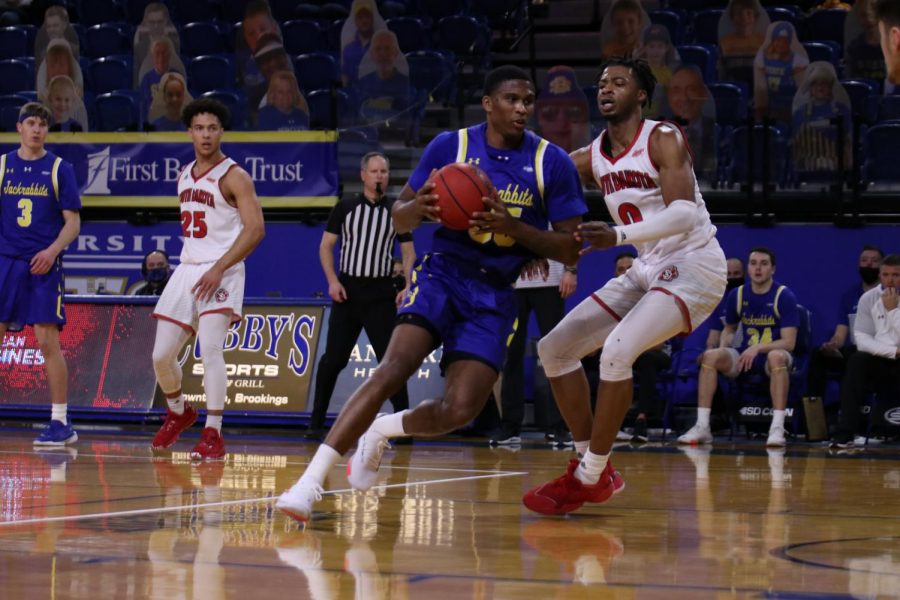 Once again, the Jackrabbits found themselves coming off a two-week hiatus due to canceled games with Denver. As the Jacks struggled to put together scoring possessions, they just could not find the right pieces to pull past the Coyotes.

“We have to be ready to go and execute,” coach Eric Henderson said after the loss. He did not use the lack of games as an excuse for the performance. “They executed their plan better than ours.”

The Jackrabbits opened the night shooting 8 of 31 from the field, yet only trailed 23-29 going into halftime. Their biggest lead was at 3-0, and that came on a Noah Freidel 3-point play.

Within the last three minutes of the first half, the deficit was cut down to six points from a nine-point run on 3-pointers from sophomore guard Baylor Scheierman and Freidel. This came timely, as SDSU hit its first 3-pointer of the night at the 2:44 mark.

Coming into the game, SDSU was shooting 41.9% from the 3-point land. Friday was a different story.

While it was not a season low, the Jackrabbits would finish the game shooting 7 of 28 (25%) from behind the 3-point line.

“We had chances to get over the hump,” Scheierman said on the long scoring droughts through tonight’s game.

SDSU was not the only team to feel the struggle, as the game’s first 3-pointer came at the 7:41 mark from South Dakota.

Opportunities at the free-throw line presented themselves throughout the game, but the Jackrabbits were unable to capitalize.

A team averaging 72% from the line throughout the season, Friday was an uphill battle finishing 11-22. Douglas Wilson finished 4-12 from the line.

After shocking the Jackrabbits in the first meeting, Stanley Umude was limited to 14 points Friday night as the tandem of Wilson and David Wingett took on the task of slowing him down. Redshirt sophomore A.J. Plitzueweit caused problems for the SDSU defense as he capitalized multiple times throughout the night, leading to a game-high 19 points on 17 attempts.

Friedel led the way for the Jackrabbits, scoring 18 points on 21 attempts. Scheierman piled 15 points onto that total and added a team-high four assists.

Saturday night seemed to open similarly to Friday night, as the two opened on slow scoring starts. The Jacks were able to fight their way back into the game and pull out a 89-78 win over the Coyotes.

The big story Saturday night was the second half surge from the Jacks. While SDSU only led for just over nine minutes, it was just enough to shock the Coyotes. SDSU was slow to start hitting shots, only completing 38.9% of their shots from the field. Meanwhile, their counterparts were more selective in their shot taking, scoring 44 points while shooting 60.7% from the field.

Umude made his presence known in the first half as he put together a productive half of 18 points. He would finish with a game-high 34 points.

Wilson was absent through portions of the game as he collected his third foul at the 6:45 mark in the first half. In his absence, Arians and Scheierman teamed up to go on a 9-0 run in the final 1:15 of the first half trailing 44-38.

Wilson would go on to score 19 of his 21 points of the game in the second half. He teamed up with Matt Dentlinger, who also contributed 21 points. The telling stat was the Jackrabbit’s 46 points in the paint.

“Playing our game through the paint, it’s our game,” said Wilson when asked about the game plan and changes after Friday’s loss.

Coming off the bench, Charlie Easley was the big contributor as he came up big defensively while adding eight points.

“After watching film from Friday, Charlie looked good in his time yesterday. We decided to stick with him longer tonight,” said Henderson on Easley’s performance. “We made some tough plays together, playing our tails off and sticking together.”

Henderson said as he was proud of his team’s willingness to comeback and win Saturday.

The Jackrabbits now look forward to building off of a tough weekend of games, and play their first road series of conference play.

“It will be good to get on the road and hopefully get into a groove,” Easley said when asked about their upcoming road trips to Oral Roberts and North Dakota State.

The Jackrabbits head into their upcoming series in second place with a 5-1 conference record.