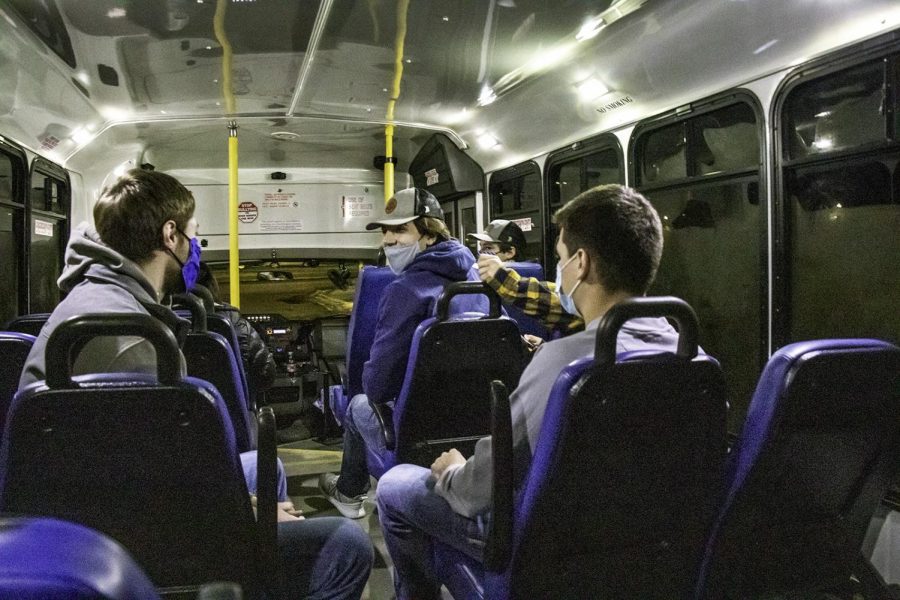 Rabbit Ride is a program housed in the Wellness Center aimed at giving safe transportation to students and community members on Friday and Saturday nights.

The program, previously called Safe Ride, started in 2006 and was rebranded this past year. Changes to the program include a new name, logo and the introduction of an app, TapRide, to request a ride.

Rabbit Ride is free of charge for anyone that would like a ride, regard-less of if they attend SDSU or not.

While the overall service is open to anyone, only SDSU students are able to use the app by logging in with their SDSU student credentials. Users can also call 605-695-3984 to request a ride.

“The program functions very much the same, the big difference is there are not stops anymore,” Mariah Weber, assistant director of the Wellness Center, said. “It’s more of a ride share, so we function a little bit more like an Uber or Lyft.”

TapRide allows students to request the bus pick them up and drop them off at any location. This is a change from the previous system of a continuous bus route with predetermined stops around town.

The system is funded from a variety of sources, including the South Dakota Office of Highway Safety, SDSU Student’s Association and the City of Brookings.

A majority of the funding is through a grant provided by the National Highway Traffic Safety Administration (NHTSA), at just under $45,000 a year, which is administered by the SD office of Highway Safety. Students’ Association provides funding for the student monitors at $9,000 a year, and the City of Brookings provides an additional $5,000.

“Without the monitors, the program does not run,” Weber said. “They pay attention to behaviors on the bus, help the driver, help with navigation, help with the app and the answering the phone.”

During a Saturday ride along, Jan Miedema, a BATA driver, and Cora Harris, a student monitor, had plenty of stories to share about the service.

“There is an awful lot of oversharing,” Miedema said. As of 10 p.m. Saturday, the bus had already dropped off a birthday party of 27 people. “We have a birthday sash out there for you to pick up later,” Miedema said over the radio.

When boarding the bus, neither the driver nor the monitor will ask to verify the age of the passenger.

“Our focus is to provide safe transportation,” Harris said.

The service operates from 9 p.m. until approximately 2:30 a.m., according to the Rabbit Ride website.

When there are no request rides, the bus will drive around to popular pick up spots in an eff ort to reduce wait times, according to Harris. These locations include Meadows, The Blues and the middle school townhomes.

The COVID-19 pandemic environment has slowed numbers for the service. While Harris said most of the passengers are using the service for alcohol related reasons, anyone can request a ride for any reason.

Rabbit Ride’s service is aimed at keeping people safe by providing an alternative to driving home or riding with someone who should not be driving.

Even with other ride sharing services similar to Rabbit Ride, like Lyft or taxis, Brookings’ DWI rates have remained stable over the past few years.