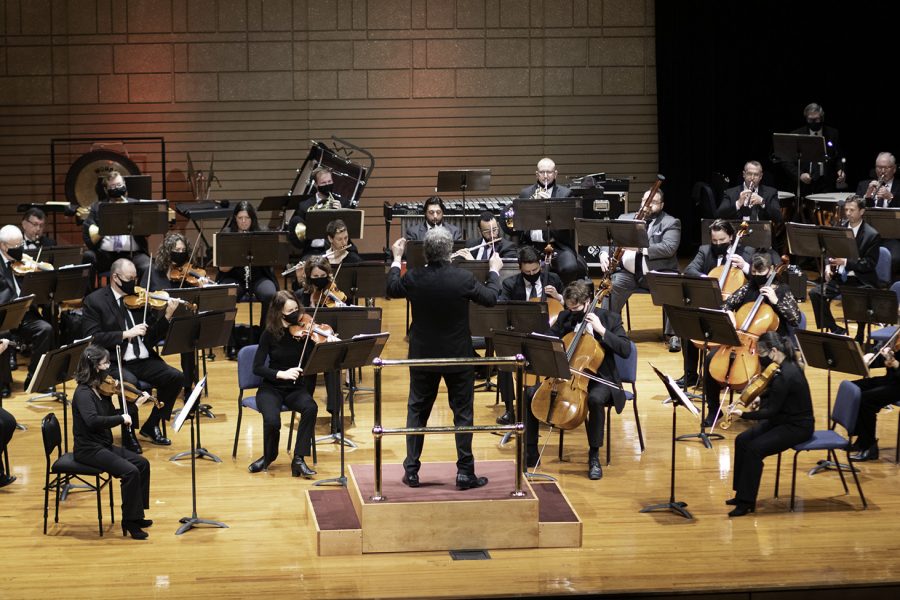 Many schools around the country are unable to conduct in-person rehearsals and performances, but this is not the case for South Dakota State University.

Since the start of the fall semester, the school has been innovative in the ways it’s been able to conduct things.

Joanna Engles, a music education major, is preparing for her junior vocal recital Feb. 4, but says it’s been strange having to rehearse under COVID-19 guidelines.

“I guess you have to pick your battles,” Engles said. “But at least we’re performing … It’s easy to take for granted.”

Precautions include having students wear masks, social distancing, taping off seats and plexiglass barriers—much like everywhere else on campus.

Some additional restrictions for the center include limited audience sizes, no post-performance receptions or meet-and-greets in the lobby and shorter or broken-up rehearsals.

The center’s new heating, ventilation and air conditioning system filters the air every 30 minutes, so rehearsals are restricted to a half hour in each room before the room must be vacant for another half hour for circulation.

One concert band, for example, might start its 90-minute rehearsal in the band room before moving on stage in the Larson Concert Hall, then back to the band room. Some ensembles are broken into smaller groups, like the concert band.

The pep band will have the opportunity to perform at the home basketball games this season, but the group is composed of only 20 students instead of the usual 36.

For more protection, some students use bell covers on their instruments or wear playing masks, which cover their nose and leave a slit for their mouth. Junior education major Josiah Crawford notes his experience with playing trumpet while wearing one.

“It’s harder for technique,” he said, but claimed the challenge isn’t better or worse. “It’s just a very different experience.”

Crawford will perform his junior recital for both trumpet and voice March 19.

Small groups, like voice lessons, practice in large rooms so there is plenty of room for social distancing.

“I’m just so glad that we’re … taking a lot of precautions to ensure that we can stay teaching in person,” said Evy Johnson, who teaches private voice lessons.

She said most of the time she is at least 12 feet from her students with the size of the room. Johnson will also be performing in a recital March 15, singing a variety of music that follows the theme of “Avatar: The Last Airbender” and the four elements.

Student and faculty recitals are held in the Founders Recital Hall. There are attendance caps, but the performances are livestreamed both to Larson Concert Hall for in-person viewing and online at the School of Performing Arts’ Facebook page.

Several events in the fall semester took place outdoors, but with colder weather preventing that as of now, finding ways to get more people involved while still being able to spread out on stage has been a challenge.

The upcoming theater production, for example, will be double cast, meaning along with fewer roles, there is a “cast within a cast,” with more than one actor assigned to each role who will perform on different days. The show is called “God of Carnage” and will run Feb. 25-28.

Dancers share a similar experience as the department prepares for the spring dance concert March 19-21.

“I feel like with the six feet apart, we’ve been creative with the ways we can make art,” Brooklyn Pendley, a senior elementary education major with a double minor in theater and dance, said.

“And it’s created new opportunities … that we otherwise wouldn’t have explored,” Davis said. They practiced together in the 2,500 square foot dance studio with only their accompanist and instructor around.

Looking toward the future:

“I think the hardest thing is that people want to congregate … [and] it doesn’t feel normal,” Director of the Oscar Larson Performing Arts Center Lynn Von Eschen said. “It’s just not human nature to ignore each other.”

Von Eschen started his position at the school in June and is responsible for the operations of the center, which includes overseeing events and ensuring safety.

Looking toward the future, Von Eschen wants to be ready and continue welcoming people and events back to the center, which is happening slowly, but surely.

The Oscar Larson Performing Arts Center is also set to host the high school State One-Act Play Festival Feb. 5-6. The festival is split between three locations this year to accommodate guidelines, and SDSU will host the Class B schools.

“Our goals are not just to survive, but to thrive,” Reynolds saidl “And stay safe while doing it.”