Jazz concert to round out fall semester 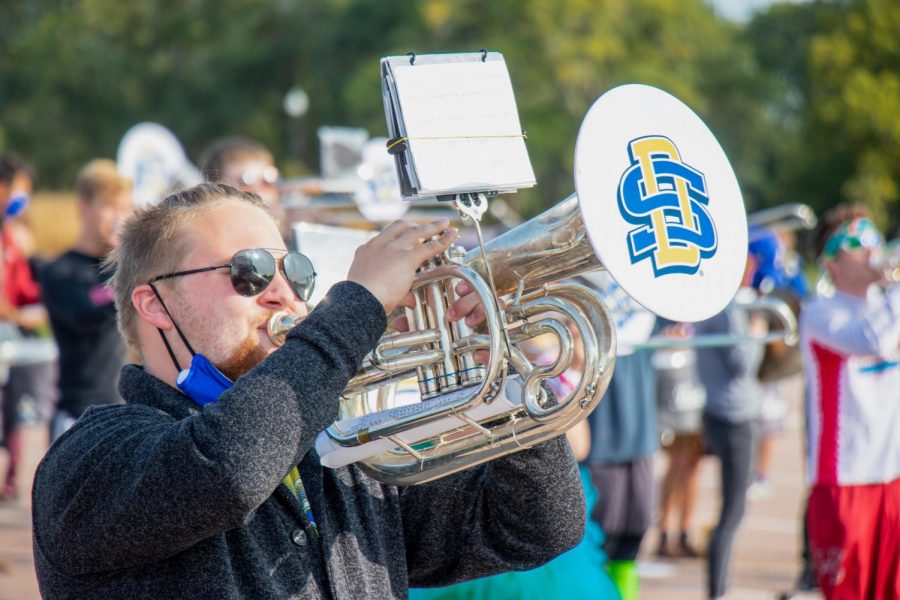 Gage Ruhlman plays the baritone in the Pride of the Dakotas, but he plays guitar in the Jazz I ensemble performing Thursday, Nov. 19.

The SDSU Jazz Band Concert will take place 7:30 p.m., Thursday, Nov. 19 in the Larson Memorial Concert Hall. This concert will feature performances from both jazz ensembles, under the direction of music professor Yi Chen.

Even in the midst of dealing with a pandemic, music remains an integral force within the community and the nation.

“Music is a different perspective and a way of speaking,” Arystan Jurgens, a drummer for Jazz II, said. “Music is not only a way of speaking that is interpreted in a different way. It connects within us and gives us a better understanding of the artist and whatever the piece is inspired upon.”

Chen added that the music provided by the jazz ensembles helps bring together a larger community through the concerts offered.

“The jazz ensembles are a vital part of the music community at SDSU,” he said. “We perform both on and off campus. The School of Performing Arts, along with the Brookings Optimist Club, also hosts a jazz festival every year that brings in students from throughout the state of South Dakota, as well as Minnesota and Iowa.”

Though the pandemic has made performances like these difficult, Chen said they have taken necessary precautions to keep everyone safe.

“The pandemic has forced all ensembles in the SoPA to reduce our rehearsal times and to limit how many people can perform together at once,” he said. “This has affected the number of music/performances that we can do. However, we are grateful for the opportunity to perform live music during this challenging time.”

He also encourages students to attend these concerts in whatever form they may be, as it is “the best way to support music ensembles at SDSU.”

Jazz music has cemented itself in our nation’s history. The modern-day term for “jazz” music encompasses a variety of genres (smooth-jazz, fusion-jazz, etc); however, the original “Jass” music is believed to have begun in New Orleans in the 1900s. At this time, it incorporated elements of ragtime, improvisation and African-rhythms and would feature either a solo piano player or small ensembles of brass and stringed instruments.

“Jazz music is unique in that it originated in the United States,” Chen said. “The genre is made up of a combination of African music, European classical music and Latin musical forms, among others.”

As prohibition was declared in 1920, jazz music began to gain popularity in other cities, as it was often played in underground clubs or speak-easy’s. It later evolved and began to give birth to new genres of jazz music, most notably swing music, which grew to become popular on the West Coast and BeBop, which became popular in places like New York.

Jazz music grew to become a widely-respected form of musical expression that it is taught in our schools, both on the collegiate and high school level. The jazz ensembles will be performing songs by popular composers such as Sonny Rollins and John Fedchock.