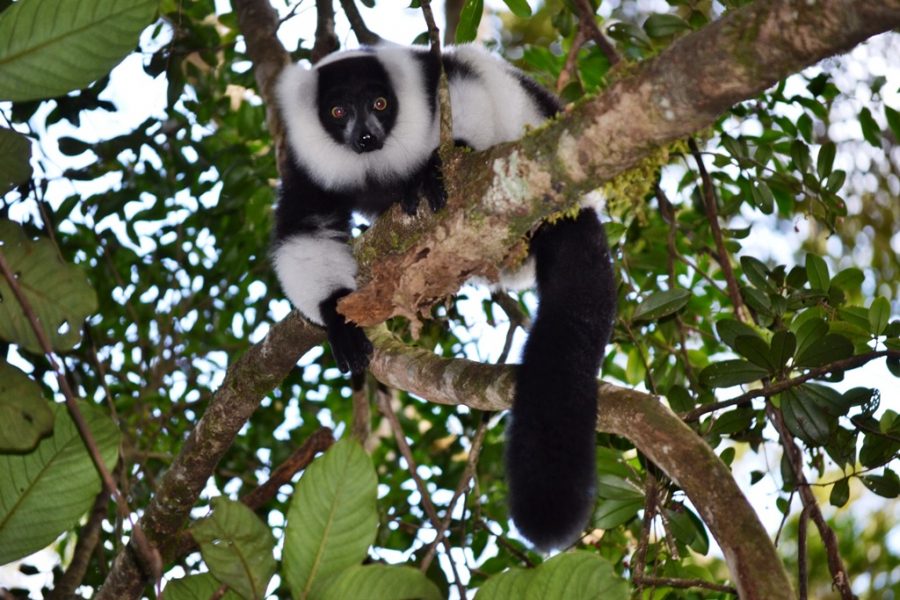 The rainforests of Madagascar are the only place in the world where wild lemurs can be found. Onja Razafindratsima, assistant professor in the Department of Natural Resource Management at South Dakota State University, has devoted her career to the research and conservation of the lemurs of Madagascar.

Due to deforestation, many lemur species have gone extinct, and over 100 of the surviving species are endangered. Many researchers and activists, including Razafindratsima, are working to protect lemurs as well as preserving the rainforests.

Lemurs play a crucial role in maintaining the ecosystem of Madagascar’s rainforests. Several plant species are dependent upon lemurs for seed dispersal. By dispersing seeds throughout the rainforest, lemurs are maintaining forest health and helping the forest grow.

“Being a seed disperser means they aid in the process of moving seeds or pollen from one area to another,” the Lemur Conservation Network said. “Ruffled lemurs, like the black and white ruffled lemur, are a prime example of a lemur species that acts as a key seed disperser.”

While in the field, the researchers will wake up with the lemurs and follow them throughout the day, only stopping once the lemurs have settled in for the night.

She uses a GPS tracking system that records location data every five minutes. This data is later analyzed to understand their movements and how they travel through their habitat.

Razafindratsima and her colleagues watch what they eat and where they go, taking notes on the specific plant species the lemurs are ingesting. They also study the dispersal of seeds from the plants ingested by the lemurs by collecting and analyzing the lemurs’ feces.

The data collected in the field is then used to determine the dispersal patterns of the lemurs. They take samples they collected and count the seeds, looking at which seed species are found as well as the concentration of each species.

They then combine this data along with data about where the samples were collected to understand the impact the group of lemurs have on seed dispersal in the rainforest. The seeds are then put through the germination process to see how long it takes for these seeds to begin sprouting.

Razafindratsima joined the faculty at SDSU in August 2019. She has applied the research methods she has used for lemurs to fruit eating animals that are native to Eastern South Dakota.

“I am trying to figure out what animal species are performing the seed dispersal, the same way lemurs do in Madagascar,” Razafindratsima said.

Most of her research takes place at SDSU’s Oak Lake Field Station located near White, South Dakota. At the field station, she locates fruit producing plants and sets up trail cams near the plants. She then uses the trail cam footage to determine what species are consuming the fruit from the plant and evaluate the eating habits of the different species.

She has also set up nets around the field station that collects animal feces. She collects the samples from the nets and uses the samples to get a better idea of the diets of several animal species found at the field station. The samples are then used to collect data on how animals impact the plant population through seed dispersal.

“[Razafindratsima] has been investigating fruit dispersal in South Dakota by both animals and birds this past year and how they impact each plant species she is targeting,” said Michele Dudash, Natural Resource Management Department Head. “{Razafindratsima’s] work highlights the importance of species interactions in SD where we have a matrix of farm fields, grazing lands, prairies and woodlands where the challenge is to produce food while maintaining and hopefully enhancing biodiversity into the future.”

Razafindratsima grew up in Antananarivo, the capital of Madagascar. She received her undergraduate and master’s degrees from the Université d’Antananarivo in animal biology, ecology and conservation.

It was during her time as a master’s student that she became interested in lemurs through her position as a research assistant for a Ph.D. student from University of Minnesota.

“I got really hooked on studying lemurs because watching them every day, looking at where they go, what they do, was really fun for me and that was how I started being really interested in lemurs,” Razafindratsima said.

In 2015, she received her Ph.D. in ecology and evolutionary biology from Rice University in Houston, Texas. She then served as a postdoctoral research associate there until 2016.

Following her time at Rice University, Razafindratsima spent a year with the Hrdy Fellowship in Conservation Biology at Harvard University where she conducted independent research and taught a course in conservation biology.

Starting in January 2021, she will be starting a new position at the University of California in Berkeley as an assistant professor in the Department of Integrative Biology.