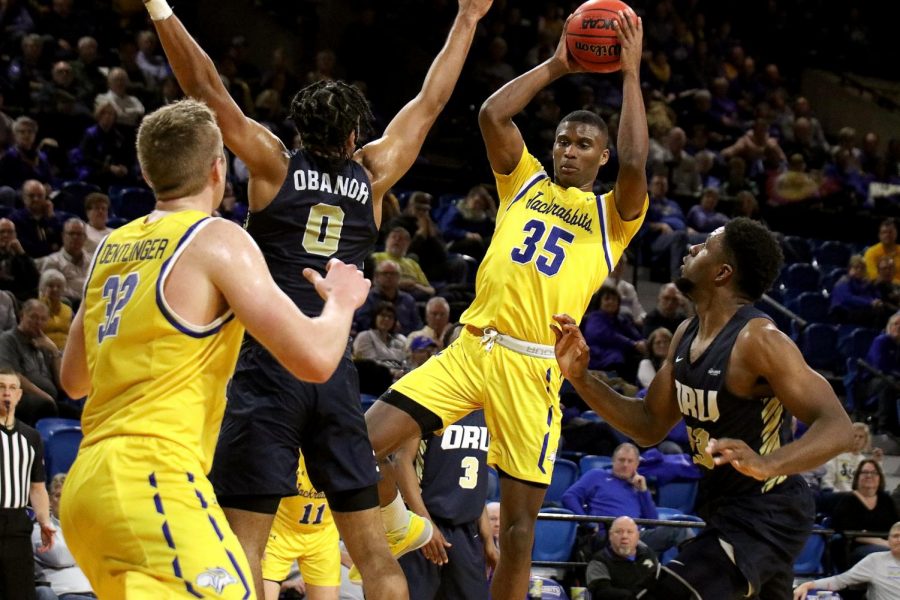 The South Dakota State men’s basketball team heads into the 2020-21 season with aspirations of a conference championship after going 13-3 in the Summit League last year with a share of the regular-season title.

After a challenging year for the SDSU basketball team and continuing pressure to succeed, the Jackrabbits believe they have all the pieces to make a run at the Summit League Tournament.

The expectations for this year’s basketball team are high. In late October, they were picked no. 1 in the Summit League men’s basketball preseason poll. Second-year head coach Eric Henderson said he’s familiar with the pressure for his team to perform well.

“It’s something that’s not new to our program,” he said. “We’ve had expectations for a really long time.”

SDSU will have all five starters from last season returning this year, further adding to its expectations. Henderson hopes that the returning starters will have a positive impact on this year’s success.

“To have all five starters back and even our sixth and seventh guys coming off the bench from last year, they understand what the expectations are,” Henderson said. “They don’t take anything for granted, and they’ve been good leaders.”

One of those key returning starters is senior Douglas Wilson, last season’s Summit League player of the year who led the team with 18.6 points and 6.4 rebounds per game. Henderson credits Wilson’s unselfishness, mentioning how it affects the team’s success.

“He infatuated our team with that unselfishness,” Henderson said. “He’s so talented, finishes so well and can score at a high level. But as talented as he is, he’s an even better teammate.”

Another critical starter to watch for is junior Noah Freidel. Last season, he averaged 12.2 points per game and led the team with 66 made three-pointers. Along with Wilson, Freidel was chosen as a preseason all Summit League player, as he looks to have a more significant impact on the Jackrabbits this season.

“It’s been fun to watch Noah get more consistent and mature as a young man, both on and off the court,” Henderson said. “I think he has a greater appreciation for our team and what we’re able to accomplish together and what role he can have in it.”

Other positives for SDSU this year are the team’s overall togetherness. Henderson credits the team’s willingness to pass the ball and show great teamwork. He also mentions team unity as a positive contributor to this year’s team.

But the team will also face its share of challenges this season.

Due to COVID-19, this year has been a challenging one for the Jackrabbits, but the team has been able to conduct their standard practices. Henderson said the team is primarily focusing on defensive unity and says that it’s something they need to work on.

One challenge facing the team this year is the changing schedule. Due to the pandemic, the Summit League schedules were adjusted, with more back-to-back conference games, to limit travel.

“It’s certainly something that’s unique for us,” Henderson said. “It’s something that we haven’t had to do a lot, but we’re just thankful to play.”

Another potential test for SDSU this season is the competition.

The Jackrabbits’ main in-conference competition this year will likely be North Dakota State, winners of last year’s Summit League Tournament. The two teams will first play Dec. 10 in Sioux Falls, then again in back-to-back games at Fargo Feb. 19 and 20.

The Jackrabbits have had disappointing early exits in the Summit League Tournament over the last two years.

Henderson said those losses have helped fuel this team for the upcoming season.

“It leaves a bad taste in your mouth,” Henderson said. “When we do have expectations as a program and losing in the first round of the Summit League Tournament is not what those expectations are. It’s kept us hungry; it’s kept us motivated throughout the offseason, and our guys remember how that feels.”