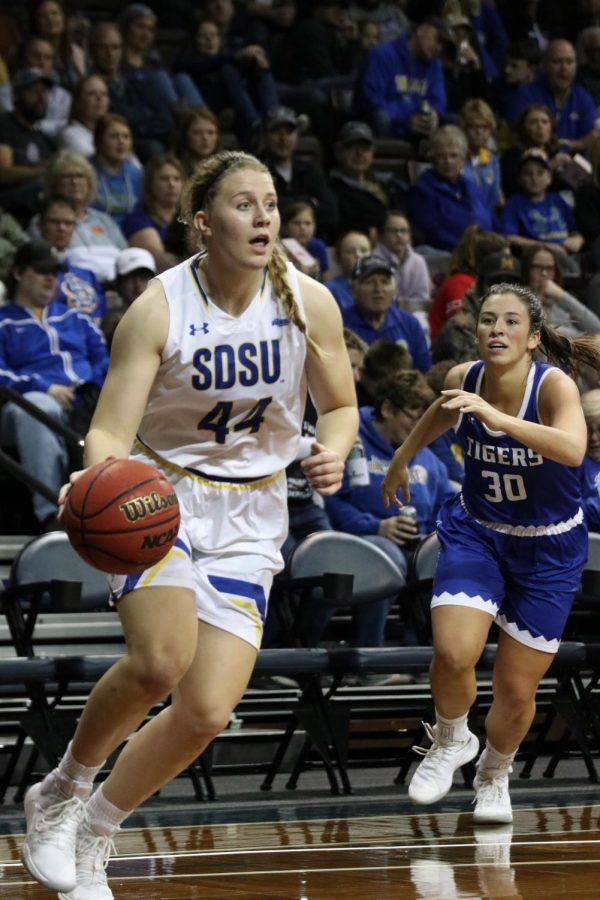 The Jackrabbits will kick-off their season, after a semester postponement, with a home game against Iowa State Nov. 28.

Following are two more home games against Creighton (6 p.m. Nov. 30) and Gonzaga (2 p.m. Dec. 6). The season will run until Feb. 27 with a final home game against Kansas City.

Despite the loss of three graduating seniors, the Jackrabbit women’s basketball team is hoping to use their chemistry and returning athletes to their advantage for the upcoming and revamped conference season.

“In one way, you really get a chance to prepare for one team and you’ll play them back to back, so you know what you’re going to get,” head coach Aaron Johnston said.

Johnston said that this new setup “simplifies things” in terms of prepping for opponents, as well as helping the team decrease contact and interaction with other people during the COVID-19 pandemic.

The pandemic also impacted how much the team would be able to practice during the summer, but it didn’t hinder the team’s ability to form a bond.

“We have a group of people on the team that are phenomenal teammates and they all care for one another, think about one another, value each other and listen to each other,” Johnston said.

He added that the team, who brought in three new freshmen and one transfer, have embraced each other and have a goal to help everyone be their best.

“They have a great understanding of what it takes to be successful and how important it is to value each person,” Johnston said. “I always feel like our chemistry is good.”

Another strength of the team is their amount of returning players. The Jacks only lost three seniors last season and now have four new players on top of Myah Selland and Kallie Theisen’s upcoming returns from injury.

Both Selland and Theisen only played in the non-conference season, as their injuries took them out for the year before Summit League play began.

“We’ll bring back two familiar faces but new faces to a rotation,” Johnston said. “And then with our freshmen and other returners, I really like the kind of direction of our team.”

“Last year for us was a bit of a challenge,” Johnston said. “We had a lot of injuries and we had a lot of things come up that in some ways made our performance last year a lot more remarkable than our record and results showed.”

The team’s final game of that season happened during the conference tournament in Sioux Falls against the rival USD Coyotes March 10.

The close matchup ended in a 63-58 defeat, cutting SDSU just short of qualifying for the NCAA Women’s Basketball Tournament.

The USD women are also the ones projected to finish first in the Summit League standings this season, with the SDSU women finishing just behind in second.

“Ultimately, those are great conversation pieces and they get people thinking about basketball, but they don’t often end up playing out how they were thought to,” Johnston said.

Johnston also said that January and February are far down the line, which is when the conference schedule starts, so it might be premature to make those predictions.

But what isn’t premature is the team’s drive for success this season.

“I think our team is hungry to compete for a championship again,” Johnston said. “Last year was a challenge and everybody left with a good taste in their mouth about how we played, but we also probably left a few games out there that we could’ve done a little bit better at.”

He said that having everybody healthy again and all being “in a good place” is serving as a good motivator for the team this year.

The Jackrabbit season doesn’t have an official kickoff date yet, as a nonconference schedule is still in the works, but expect a packed season of 25 games.

And as for Coach Johnston, who’s going into his 21st season as head coach, each year is a new encouraging experience.

“That kind of sense of history here is motivating to me now,” he said. “When you think back on all the great memories that we’ve had, in a good way you want those to be contagious. You want those to happen again.”