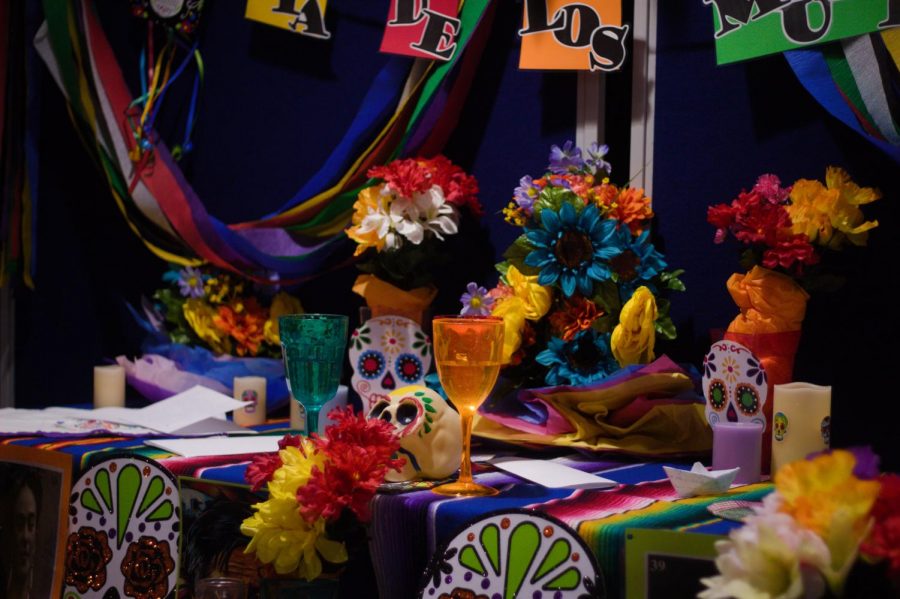 Día de los Muertos, a holiday honoring loved ones who have died, was celebrated across the globe Nov. 1-2, including here at South Dakota State University.

“I think it’s important that everybody, not just Latino members, know about these traditions, because it’s really nice to get connected to the other side,” Asledi Castillo, a member of the Latin American Student Association, said. “Just to think that your family members are coming back to visit you one day.”

Día de los Muertos, or “Day of the Dead,” originated in Mexico through a combination of both Indigenous traditions and Catholic beliefs brought by Spanish conquistadors.

During Día de los Muertos, celebrated at the same time as All Souls Day and All Saints Day, the souls of those who have died are able to return to the land of the living, and their friends, family and loved ones celebrate this return through music, food and processions to honor those who have died. Many people will also spend the day at the cemetery where their loved ones are buried.

“Oftentimes people at the cemeteries will either pray or play music,” LASA adviser Florencio Aranda said. “Sometimes they take that loved one’s favorite meal or drink and place it on their tombstone.”

“The ofrendas have evolved over time and there are different aspects of the ofrenda that carry different meanings,” Aranda said.

Some ofrendas are also decorated with salt, which is thought to purify the souls returning to the land of the living, papel picado, or perforated paper meant to be a window between this life and the afterlife and cempasúchil, or yellow marigolds, that create a path for the dead to follow.

Because of the holiday’s focus on death and the dead, there are many misconceptions about what Día de los Muertos, as well.

Aranda explained that in some cultures that tend to shy away from death, the holiday is seen as morbid or taboo. Though death is a central part of the tradition, in Mexican and some other Hispanic/Latino cultures, it is seen as a natural procession of life and something to be celebrated, not feared.

Another misconception is that Día de los Muertos is “Mexican Halloween” because of its traditions and proximity to Oct. 31.

“They think because it’s around the same time as Halloween, that it’s just a holiday in Mexico, not realizing it’s very sacred and religious, and that it also plays a big part in that cultural identity,” Aranda said.

Día de los Muertos as it is celebrated in Mexican culture is not universal. Most countries in Central and South America have their own traditions during Nov. 1-2 that, while similar in some ways, are distinct for the cultures of the region.

Lucia Frias, a sophomore from Peru, says that her culture has Día de la Canción Criolla, a day to honor the struggles of Indigenous peoples and African slaves through music.

“It’s more focused on typical Peruvian music, and it’s also on the same day, but we also celebrate Halloween,” she said.

Other holidays include Día de Finados, the Brazilian tradition Nov. 2 that is centered less on celebration and more on grief, and the Guatemalan Festival de Barriletes Gigantes Nov. 1, where giant kites are constructed in addition to similar traditions to the Mexican culture.

The representation of Día de los Muertos as we know it now started when Aranda arrived at SDSU in 2017. Before then, only a small table with a poster containing information about the holiday was displayed.

“We knew that we wanted to make it big, and we wanted to engage the community and the campus partners,” he said.

In past years, LASA has hosted a week-long celebration of Día de los Muertos by showing movies, hosting a dance, painting faces at the Boys and Girls Club and painting calavaras, or the colorful sugar skulls often associated with Día de los Muertos.

Because of COVID-19 restrictions, students were only able to help construct the ofrenda; still, Aranda hopes to bring back previous events once it is safe to do so.

“I think that is absolutely important, especially for students, that they see themselves in the campus culture,” he said. “And when they’re the ones able to lead and be the ones who are driving these initiatives, it gives them a sense of ownership, responsibility, but also pride.”

“I think everyone needs to have the opportunity to learn about everything,” Frias said. “I think it’s really important to know and respect everyone’s cultures and religions. For people who are international students, it’s helpful to know that on the other side of the world, they are actually celebrating something, and it makes them feel a bit closer to home.”