Scrimmage moved to fall to prepare for spring football 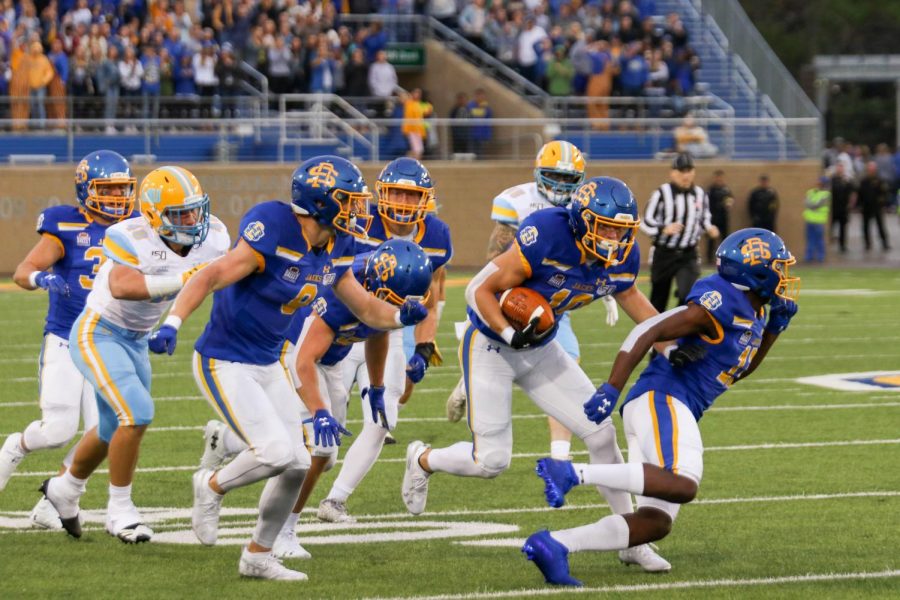 Despite postponement of the football schedule, the Jacks will be on the field for Hobo Day.

Traditionally, the football team holds a scrimmage game amongst the players each spring. This year, the scrimmage match will be Oct. 31.

According to a tweet by the Argus Leader, “some fans will be allowed, with season ticket holders and students given priority.”

Though this year is far from normal with South Dakota State’s fall football season canceled, players are working to make sure they’re ready when they get their opportunity to compete again.

As strange as it sounds, they’ll get their chance this coming spring.

The Missouri Valley Football Conference announced in August that its teams will compete in an eight-game spring schedule starting in February. The Jackrabbits open the season Feb. 20 at Southern Illinois and host their first home game March 13 against Youngstown State.

Despite the postponed schedule, players are working to keep a positive attitude and view the pandemic setback as an opportunity to get better.

“Really quickly we realized that this is just a big source of adversity in our lives right now and with that adversity comes opportunity,” senior offensive lineman Wes Genant said. “We get six more months to train and get stronger and better with our offense before we start the season.”

The season will include four home games. In addition to the home opener against Youngstown State, the Jackrabbits will face Western Illinois, Indiana State and University of South Dakota.

“It took me a little bit to adapt, but everything’s going back smooth,” said Wilson, who finished second on the team with 83 tackles in 2019.

Despite having to wait until the spring to play, the team is staying positive, according to Wilson.

Coach John Stiegelmeier, who will enter his 24th season as SDSU coach this spring, credited the team’s senior class – including Wilson and Genant – for setting strong examples on and off the field in this less than ideal time.

“It would be easy to be negative in a time like this and cry about not wanting to be out here, but I just kind of lead by example,” Wilson said.

The pandemic has forced the team into multiple adjustments, causing a change to their practices.

The team is in an NCAA 12-hour rule mode, which means they can’t use pads, wear helmets or spikes. They are allowed five hours of individual instruction, and the other seven hours consist of lifting weights and Zoom meetings.

Along with changes to their practices, the team is also being careful, with coaches and players taking necessary protocols to keep everybody safe.

“We locker our guys by either who they live with or with the side of the ball (they are on), so we try to keep them separated that way.”

Genant said players are getting screened weekly to make sure that no one has been exposed to the virus or tests positive around the rest of the team. The postponed fall season and the changes to practices definitely have presented new and unusual challenges for the team.

“It’s just the fact that we’re in an area that we’ve never been,” Stiegelmeier said. “We’re trying to figure our way through this.”

Meanwhile, team members continue to focus for the upcoming spring season, learning to value every step along the way.

“I think we’ll appreciate every rep different than we ever have,” Stiegelmeier said. “You always think about the guy that loses a season because of an injury how precious those reps are, and those games are after that, and I think we’ll all have that mentality.”