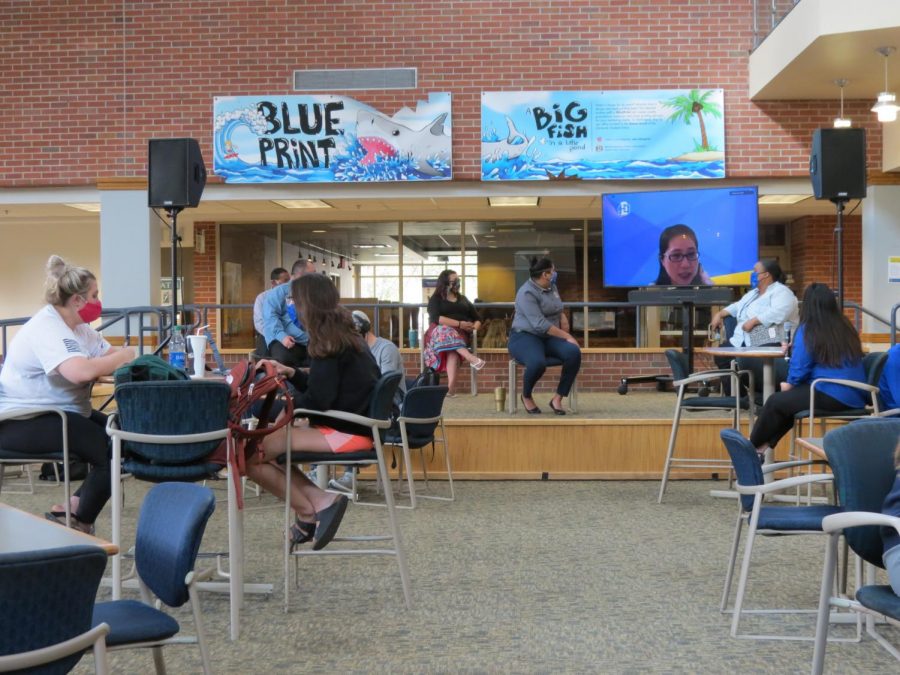 he Multicultural Center wrapped up their Build Your Own Brand week with a professionals of color panel Sept. 25.

The panel included professionals currently working at South Dakota State University, as well as guests sharing their advice when searching for a job as a minority.

One common theme of the panel was how to deal with feeling different from others and selling what makes each person from different backgrounds unique. Alexis (Lex) Hundley, a junior nursing student from Sioux City, explained how she felt connected to the panel.

“I thought it was wonderful. I thought they provided some really great insight, especially being a minority myself,” Hundley said. “I think it was really great to just see the minorities that are around us in the community that we have here.”

Even as the professionals they are now, the guests of the panel explained their own struggles with this as students and how they eventually used that to drive them forward.

“What led me to where I am today is I really didn’t have a whole lot of folks that looked like me in higher education, and that kind of made me mad,” Morseau said. “Part of my magic is my identity, and that’s really what drove me to be here.”

On the panel, they discussed their “magic,” or how their unique identities contribute to their brand as professionals. Each guest had a different definition of their own magic and encouraged students to embrace what makes them different.

“I think your special magic is you. You gotta be yourself. Not your Friday night self, bring your LinkedIn self,” Williams said.

Aranda described how his previous experiences led him to better connect with his students now. In interviews, he recommends taking these experiences and combining them with professional qualifications to paint a genuine picture of who you are and what sets you apart.

“I was that remedial student, that first generation college student of minority, low socio-economic status at a predominantly white institution,” Aranda said. “I feel that lived experience is what truly helped me get to where I am here; it continues to drive my work because I’m able to connect with students because I’ve been there, I’ve done it and I get it.”

Joyce also mentioned this feeling of “impostor syndrome” that once held him back. He described one of his first interviews out of college at a marketing firm in a high rise building in Washington D.C. He stepped into a beautiful conference room and was interviewed by three older white men.

“They looked like they had money. I didn’t grow up with money. I wanted Nikes and my parents bought ‘Sikes,’” Joyce said. “When you’re in these situations, something might be telling you that you don’t belong there, that you’re not good enough to be there.”

Joyce said that was the worst interview of his life, but he’s since turned it around, is head of his own financial firm and makes it his mission to help those with first-generation wealth like himself. He now sees that interview he had as an opportunity. He could have been the only one they saw that day that looked like him and had his unique background that he could offer their organization.

According to Hundley, that part in particular really spoke to her as a student, where she feels she is often the only one in the room who’s different.

“I think that was really nice and I kind of really related to that, just not seeing as many people here that I’m used to and it just being kinda different with Brookings being a smaller town,” she said.

Hundley described how she is glad there are events like this at SDSU ,and she thinks they are important to provide information and diverse visibility for all students.

“I really think it just gives people that maybe aren’t the minority a perspective from minority people and they can kind of provide that support,” Hundley said. “Also if you are a minority, you can really relate to it and you get advice from people who have been there and experienced that and know how to deal with it.”