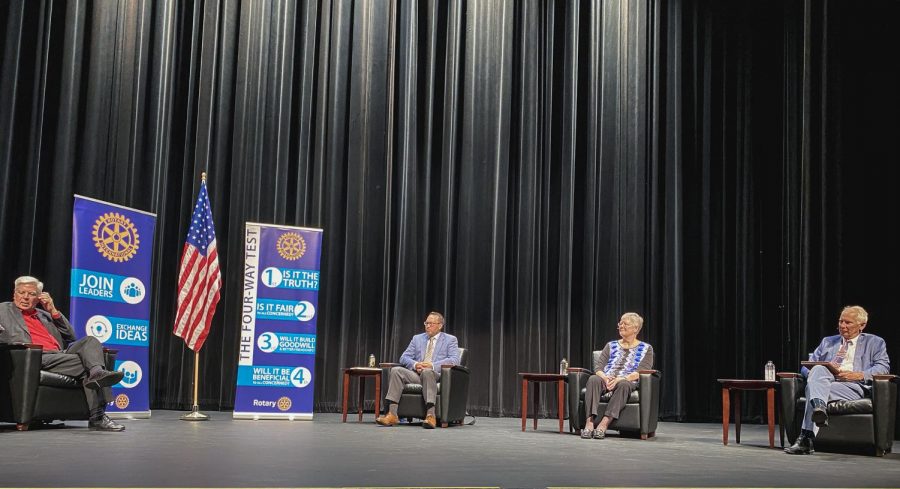 “Although we have been conducting elections in this nation for well over centuries, the legitimacy of our election process is under intense scrutiny at the very time that we are holding the most contentious presidential elections in the nation’s history,” said Jack Marsh, moderator of the event and rotarian.

Marsh began the meeting by quoting President Donald Trump, who has very publicly voiced concerns and doubts about the security of the United States voting system, particularly mail-in ballots.

According to a Tweet by President Donald Trump, “There is no way, zero, that mail-in ballots would be anything less than substantially fraudulent. Mailboxes will be robbed, ballots will be forged and even illegally printed out and fraudulently signed.”

Though not making public any particular stance on the president’s words, the club had many questions for the South Dakota officials, and for good reason. In April 2020, during the spring primary, the state sent out absentee application forms to all registered voters in South Dakota and received an especially large number of mail-in absentee ballots.

“There was a big response to them,” Barnett said. “I think in the 2020 primary there were over 50% of ballots that were absentee… It was a big number, especially compared to primaries in previous years, you know maybe 17% of the votes cast were absentee.”

When Barnett was asked about the integrity of the South Dakota voting process in general, he demonstrated a strong confidence in the current system, explaining the measures in place.

“I think we have adequate safeguards where instead of just sending out a live ballot to somebody, the responsibility is put on the voter to fill out an absentee application form, which needs an original wet signature and has to be accompanied by a photo ID or notarized,” Barnett said.

In her experience as auditor, Roust agreed, explaining the process on her end even in other states.

“I think even in the states that automatically send ballots out, typically they have the signature matching that the secretary just described. When the ballot comes back, they would be signature matching to the registration that is on file, so they do the same sort of process that we do,” she said.

Chief Information Security Officer Edman was asked about the technology put in place regarding hackers and foreign threats. He explained that his department has a large amount of information they must make public but also many things they have responsibility to keep private. However, he is confident that the system is very secure against cyber attacks.

“We see a lot of attacks on a daily basis in the state government. It probably adds up to billions on a monthly basis,” Edman said. “The technology, the tabulation, that process is really rock solid. I don’t stay up late at night worrying about the election and how the votes are being counted, and whether they’re legitimate or not. That process is really tried and true and full of integrity.”

Marsh asked for reassurance that there are enough firewalls and protection to keep foreign forces from meddling in the upcoming election.

“There are significant amounts of evidence in regards to foreign nations and trying to influence the election, but their ability in South Dakota to impact the vote itself, not gonna happen,” Edman said.

Edman also confirmed that there has never been a successful hack in the 10 years he has been in his position. Marsh turned the question over to Roust, asking if, in her 20 years of experience overseeing elections, she had seen any instances of proven fraud.

“I was in charge of elections that counted well over a million ballots, and I can count on one hand instances where it appeared that somebody may have voted twice,” Roust said.

She explained that this was usually either a clerical error due to people with the same name being checked off by mistake or an elderly person accidentally sending in an absentee ballot and then later taken to vote at the polls. All instances were quickly rectified. She again stated these were a few incidents in over one million ballots.

When it comes to the actual election day, the group agreed all ballots must be sealed until then. There is a system in place where they upload totals in a massive amount using secure technology, or smaller counties upload manually. These systems require multi-factor authentication from uploading to printing results, and having multiple people confirm the numbers.

“We’ve gone through it multiple times, if there’s a gap in there, we haven’t found it yet. I’m very confident they are not going to be altered in any part of the process,” Edman said.